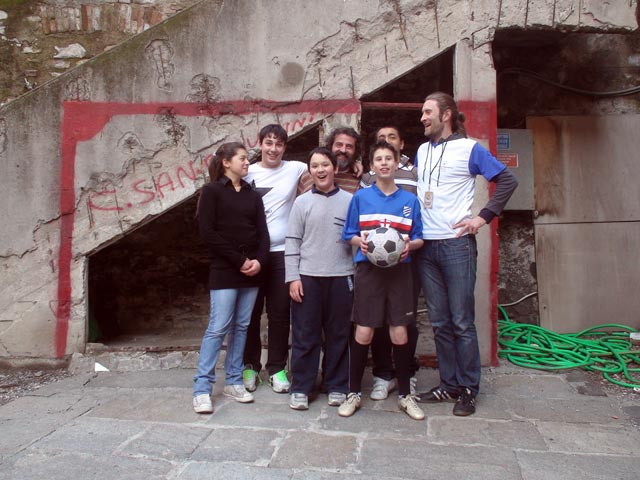 From stadium to street in Genoa

Given that we celebrate the origins of football and how the rules and the game have spread around the world, a visit to Genoa CFC, arguably Italy’s first football club, made good sense. A bit of googling revealed, however, that the Piazza d’Armi (where the club first played) no longer exists and is now occupied by railway sidings.

So, what to do? Give up on Genoa and head to France? Following up on our experience at Andelecht, where we also had no response to our email but received red carpert treatment, we decided to go to Genoa and see what would happen. 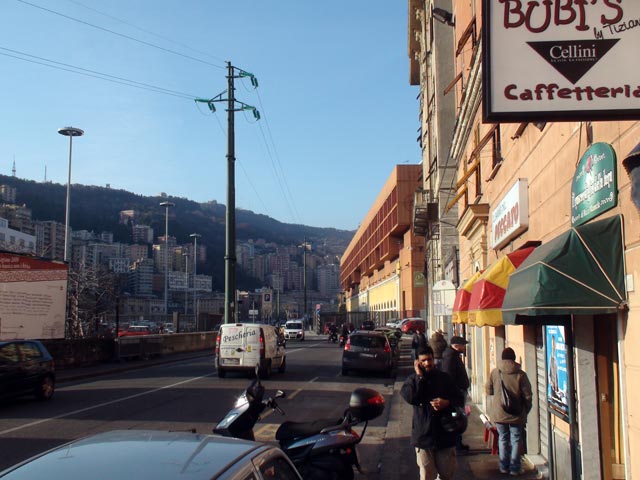 Before we knew it, we arrived at the former World Cup stadium shared by Genoa and Sampdoria. An amazing theatre surrounded on all sides by thriving city. Dribbling The Ball around the stadium we saw a sign saying “Centro Socio Educativo S. G. Battista” and a group of kids playing basketball right in the shadow of the stadium. 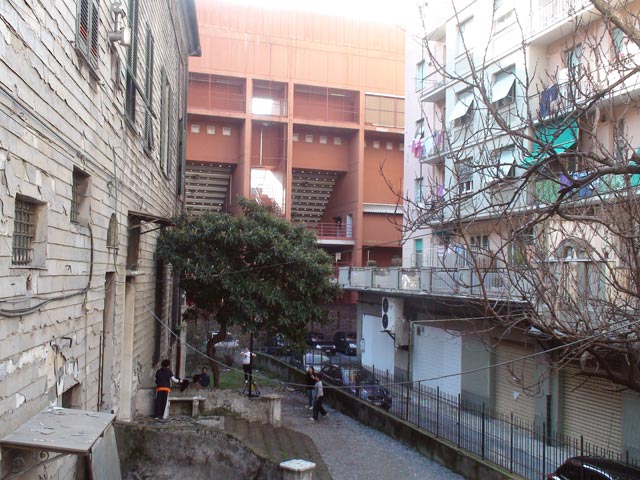 Basketball in the shadow of the Stadio Luigi Ferraris

A game of football seemed like a good idea. The Ball was introduced and football was played. Boys girls, young, old… street football at its finest. A sunny winters day, a red goal painted on an old brick wall, the Stadio Luigi Ferraris as a stunning backdrop… this is what The Ball is all about…

From street to stadium, a celebration of the beautiful game. 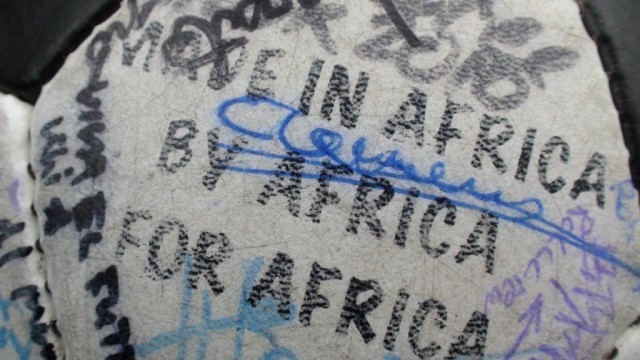 The Ball meets its match

We left Inter’s training ground still reeling from the whirlwind that we had been swept up in that morning. Christian needed coffee before contemplating the long drive south to Genoa, so he and Andrew headed into Appiano Gentile to see if there was a café in town. Indeed there was…

We strolled into the Café en Piazetta and ordered two coffees and got talking to Giuseppe, who made us the coffees. Moments later, his wife Roberta, hearing about our story, came in with a ball signed by the whole Inter Milan team… 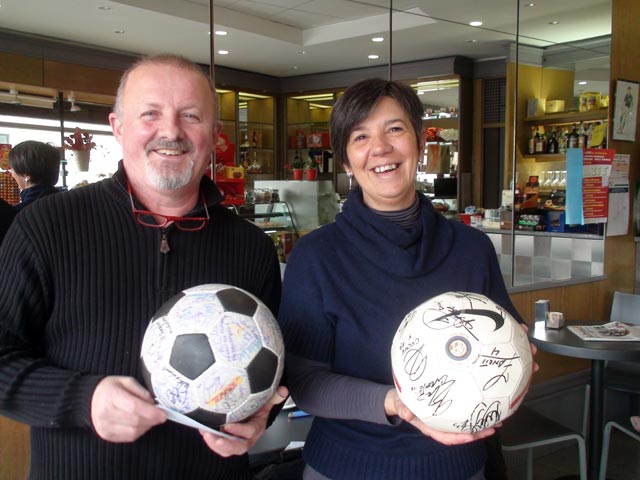 It turned out that Giuseppe supports AC, while Roberta supports Inter. They love two different teams but they also love each other.

Tags: Coffee, Italy
Posted in Italy, The Ball, The Journey | No Comments » 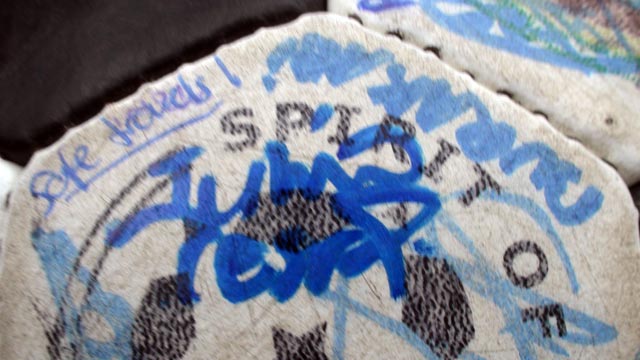 The Ball and The Stars

We had to get to Inter’s training ground out of town at Appiano Gentile by 10am. It’s supposed to be a half hour drive. “Easy,” we thought. We left at 9am, thinking we were giving ourselves plenty of time. 30 minutes later we had arrived back at our point of departure, having been led a merry dance by Milan’s chaotic road network.

The fog, congested roads and our poor navigating left us battling the clock. Panic began to set in. Nasty words were exchanged between driver and navigator. But somehow, almost miraculously, we found the right road and made it, just about on time, to the photo-shoot.

We drove past the paparazzi waiting at the high-security front gate and were escorted out back, just outside of the players’ area right before practice. We were told that it would be Brazil’s number one goalkeeper Julio Cesar, who would be joining us. 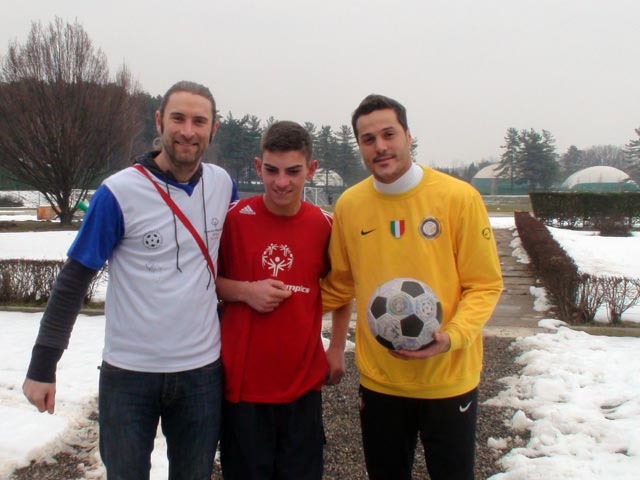 Andrew, Matteo, Julio and The Ball

“He is 100% for the World Cup”, said Andrea Butti from Inter. “That is why we thought he would be the right man.” A true gentleman, he signed The Ball and headed it on its way.

Julio Cesar’s signature on The Ball

Special Olympics was represented by athlete Matteo, who gave The Ball a big kick southwards, and whose signature on The Ball means a great deal to us — two stars kicking and signing The Ball in one day is a rare event. 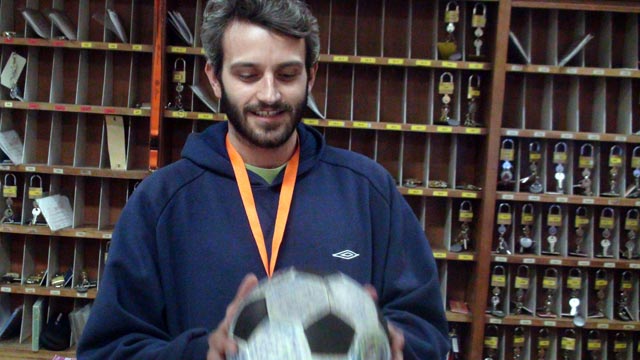 The Ball is a magician

Our next mission — find a place to stay. We googled the address of the local youth hostel and headed off from the San Siro in the car to try and find it.

Before we knew it we were completely lost, driving around Milan in the dark, in the fog, in the cold, on the phone to Giovanni from the hostel. “Ahhhh,” he said, “you are 2 minutes away.” Though we were very near the hostel, we were utterly unable to find it. Tiredness and frustration crept in. A Brazilian on the street wanted to talk football but had no idea where we were. Finally success. Ahhh, a bed for the night and friendly hostel manager Giovanni: “Football is magic and The Ball is a magician,” he said. “It is the universal language.”

Giovanni at the Milan youth hostel

We went to bed wondering which Inter World Cup star we were going to meet the following day. 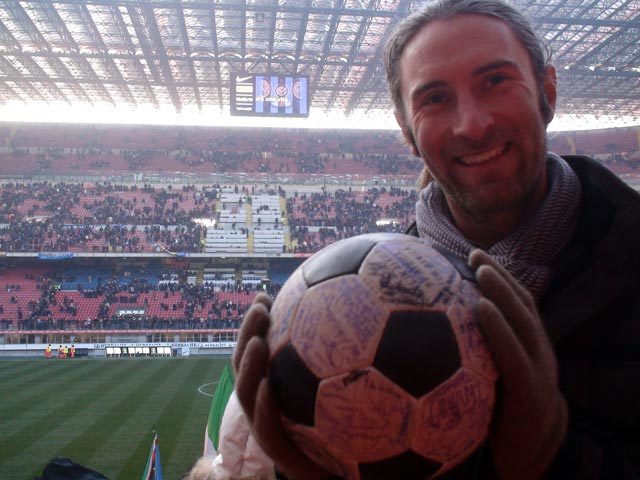 The Ball at the San Siro 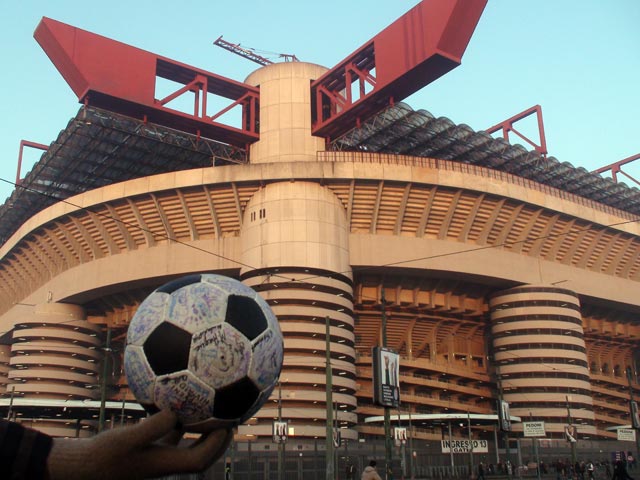 The Ball at the San Siro

We were guests of Inter Milan with tickets on the half way line in the San Siro — one of the world’s great football cathedrals. 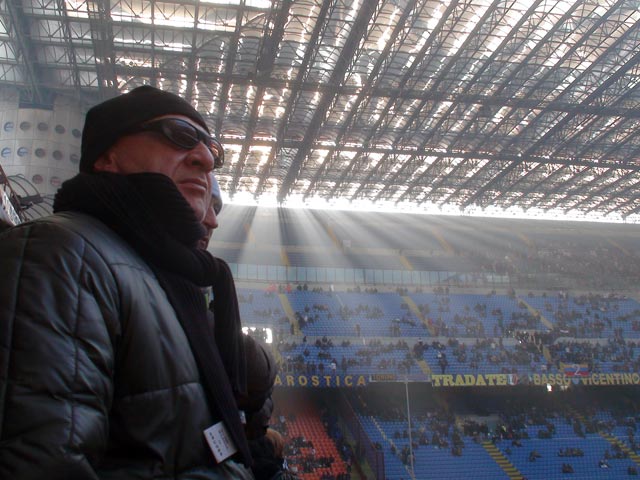 The San Siro – a cathedral of football

The Ball got stuck in the turnstiles. Christian and I were inside. The bag and The Ball were outside. The fan behind me could have simply legged it with by backpack and The Ball. But he didn’t. The Ball squeezed in with the help of a nameless Inter fan whose name we wish we knew.

“WTF?” Christian screamed, “How did that not go in?”
“He’s like a cat”, Luigi, sitting in front of us, said, referring to Julio Cesar’s incredible reflexes.

The rest of the match was spent in conversation with Luigi and his friends. A lecture in football, Inter-style followed. Indeed, replays aren’t allowed in stadiums but luckily Luigi would call his cousin after any controversial scenes. Yes, we can confirm that Calgiari’s goal was offside. Of course it was offside: his cousin, a die hard Inter fan would never have said anything else.

Andrew show The Ball round the San Siro

After the match, Christian asked Luigi to describe who supports Inter and who supports AC. “Intelligent people support Inter, of course. And the other team in Milan is called AC Milan. The normal part is for Inter, the remaining part… I don’t want to use any rude words… is for Milan AC.”

We think we know what you mean Luigi. Sort of… 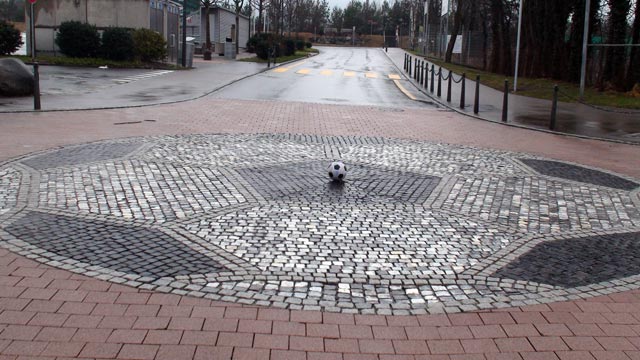