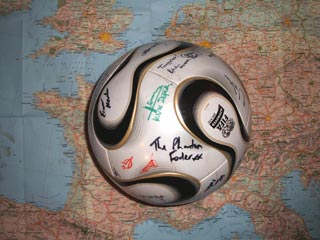 Welcome to The Ball 2006. This was the first time the project was known as “The Spirit of Football”. Stories can be found on the main page of the blog. Previous stories can be found in the archives, or use the search form to find something specific.

The 2002 journey showed us the ability of football to break down barriers and create friendships — that everyone shares football as a common language. The Ball 2006, The Spirit of Football to give it its full name, embodies the motto of the 2006 World Cup: A Time to make Friends, and its journey will again bring people together in the spirit of the beautiful game.

The Ball 2006 was played with in a commemorative match in Battersea Park, London, reminding us of the origins of the modern game. It kicked off from England and headed for Munich for the Opening Ceremony on the 9th June 2006.

Map of the Journey

The following list contains our selection of links to some of our favourite stories from the 2006 trip. Why not use them as jumping off points for reading about The Ball 2006?