People often ask if we have a spare ball in case we lose the one we are carrying. No, we reply, there is only One Ball and only One World, and we have to look after both.

The Ball – football’s equivalent to the Olympic Torch – has been kicked by Spirit of Football to 5 FIFA World Cups, visited 50+ countries and inspired more than 50,000 people.

The Ball 2022-2023 was officially launched at Battersea Park, London on 10th July 2022. For the first time ever, The Ball will be travelling to the FIFA Women’s World Cup 2023 in Australia and New Zealand and NOT to the Men’s World Cup. Football’s equivalent to the Olympic Torch was kicked off from its “Mount Olympus” – Battersea Park in London – where the first official game of FA Rules football was played on 9th January 1864.

More than 50 partner organisations and individuals from more than 30 countries will be joining us on this special journey to take action on three of the Sustainable Development Goals set out in 2015 by the United Nations General Assembly: Climate Action, Gender Equality and Fair Play.

Ella Williams sings for The Ball

“When I first learned about the Spirit of Football, I loved their message and their tactic of harnessing the crazy energy of football fans to target global issues. Still Running was my attempt to combine soccer and climate action into the theme song for their upcoming trip around the world.”
— Ella Williams 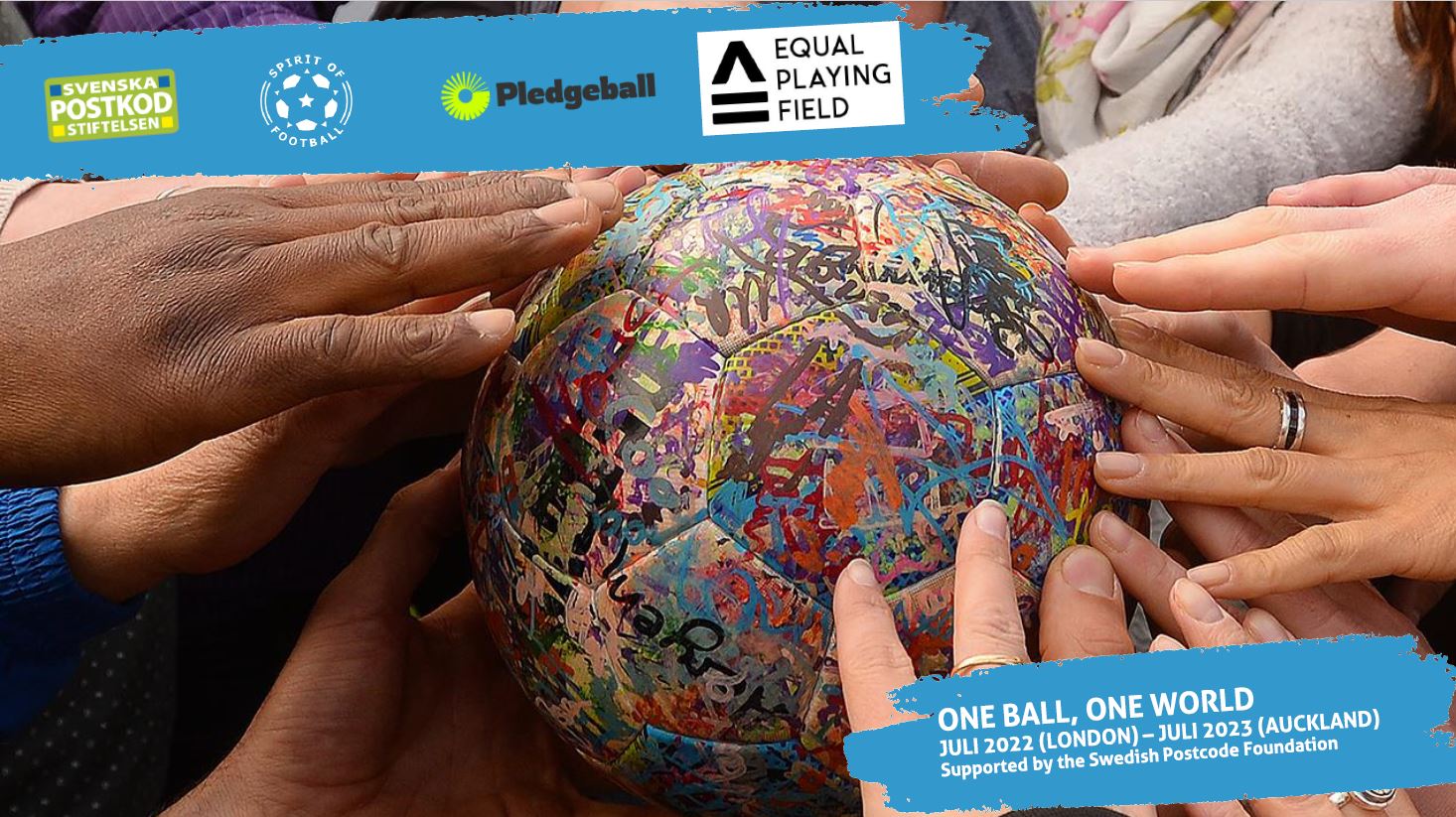 Download the latest presentation (PDF) that will be shown at COP27 at Sharm el-Sheikh. 8th November at 7pm Egyptian time (6pm Central European Time), The Ball will be presented by two wonderful supporters of The Ball:

in the Blue Zone’s Climate Action Hub at COP 27 in Sharm el-Sheikh, Egypt. The Ball at COP event will be accessible to watch live at this link: https://bit.ly/COP27_Webcast.

Spirit of Football and Pledgeball at COP26

For 20 years The Ball has raised awareness of global issues. Now is The Ball’s moment to take climate action. What quantity of emissions can the people that it encounters collectively pledge to save? We invite you to kick, head and sign The Ball – and then make a pledge yourself.

Make your pledge with The Ball

The Ball is going on its first ever journey to a Women’s World Cup in Australia & New Zealand. Anyone and everyone is invited to sign it. Sign The Ball, make your Climate Pledge here and challenge others to do it too!

The Ball is going on its first ever journey to a Women’s World Cup in Australia & New Zealand. Anyone and everyone is invited to sign it. Sign The Ball, make your Climate Pledge here and challenge others to do it too!

Gothia Cup and Spirit of Football share the same mission of bringing the world together through football by emphasising the role football in general and youth football in particular, can play in social change and development, for a more sustainable world.

EarthDiverse hosts a replica of The Ball for the next year to increase awareness and knowledge about climate change through a unique and inventive teaching platform: football and fair play.

The Ball at Football Écologie France

We are happy to announce that The Ball is going to France to meet Football Écologie France! After a project week our partner will continue to collect pledges to raise aweness on sustainability! And it’s positive effects on the wonderful game…

The Ball at RENN Netzwerk

Our partner RENN Netzwerk hosts The Ball and continues to spread the word of climate action and social transformation!

Travelling with teilAuto to reduce our carbon footprint

The Ball is travelling to destinations in Germany and Europe via teilAuto – one way to reduce our carbon footprint.

Check out this blog post about our partner RENN Netzwerk and see the difference every single of us can make!

Check out the blog post on our school workshop in Sachsen Anhalt. If you want us to come to your school, company or organisation jjust get in touch!