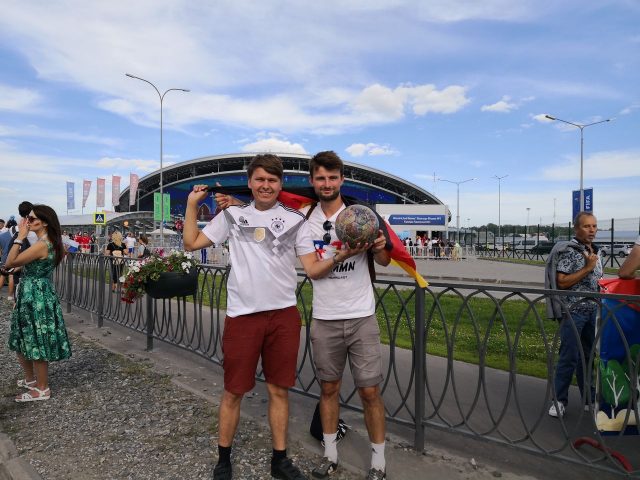 The Ball journey 2018 was nearing its last hours. The finishing-line looming, the two remaining ball-bearers wanted to pay a visit to the Land of the Tatars. After an exhausting drive (2300 km including an all-night stint) we finally spotted our destination, Kazan, in the light of the dawn – the easternmost point of the Ball Journey 2018. Inn the process of preparation and organisation of this project, we were very much supported by the Thuringian State Chancellery and Minister President Bodo Ramelow, to whom we extend our warmest thanks.

As usual, we quickly found our accommodation and set off immediately to start on our accustomed exploration of the environment. Note: the 8 square-meter double bedroom in our 2-star hotel did not really invite to a long sojourn. But we were nonetheless happy to once more occupy real beds instead of a row of seats each in the van.

We started off happily towards the city centre and were soon of the same opinion, that this is a very special place. Kazan, the capital of the Republic of Tatarstan, is known as a cultural and scientific centre and is quite prosperous compared to other regions in Russia. It also has the greatest Muslim population. In the middle of the city of 1,2 million inhabitants towers the Kazan Kreml, with its impressive Kol-Sharif Mosque – a truly inspiring sight in the sunshine, as well as under a warm summer rain. 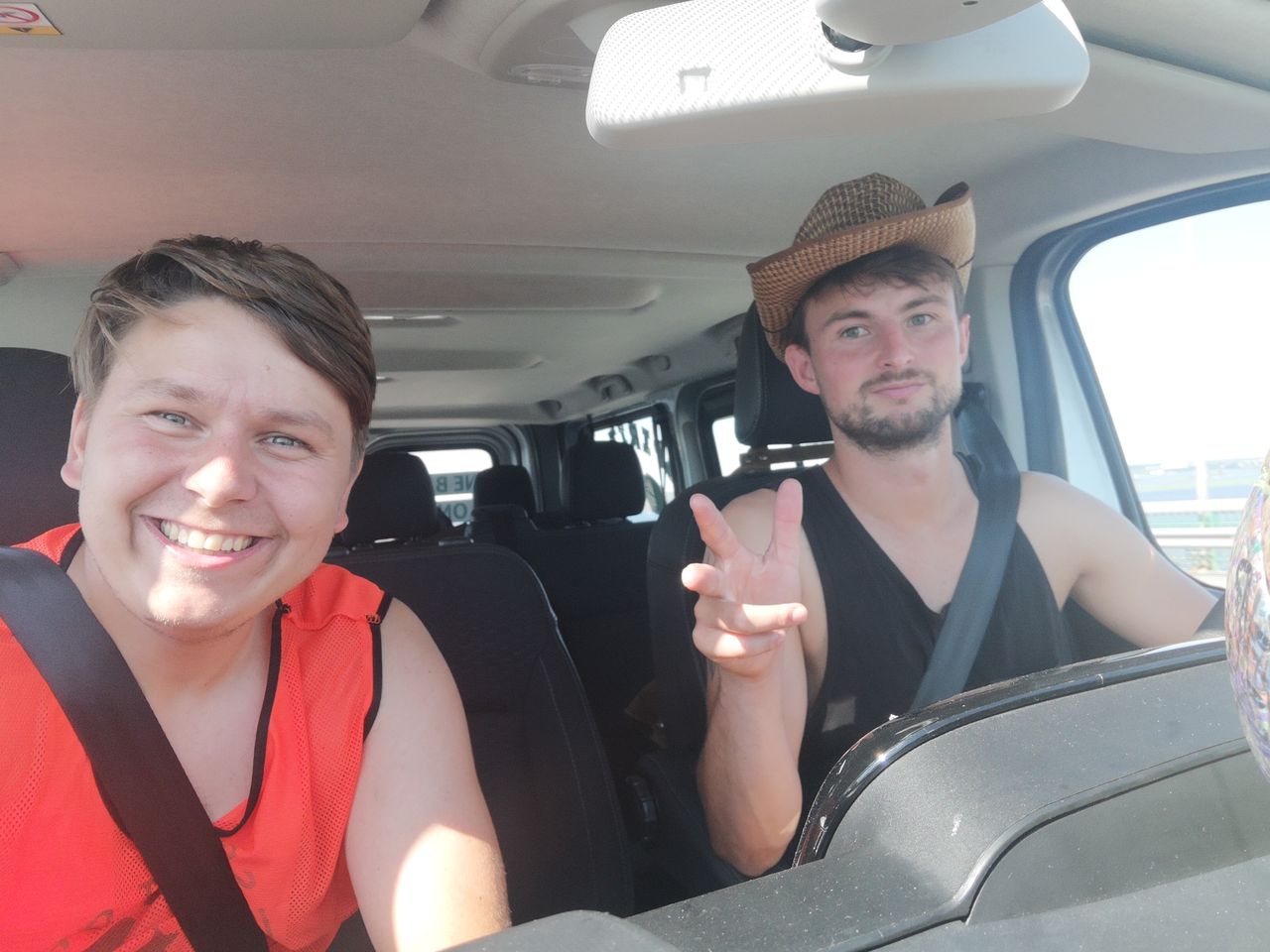 On the way to Kazan 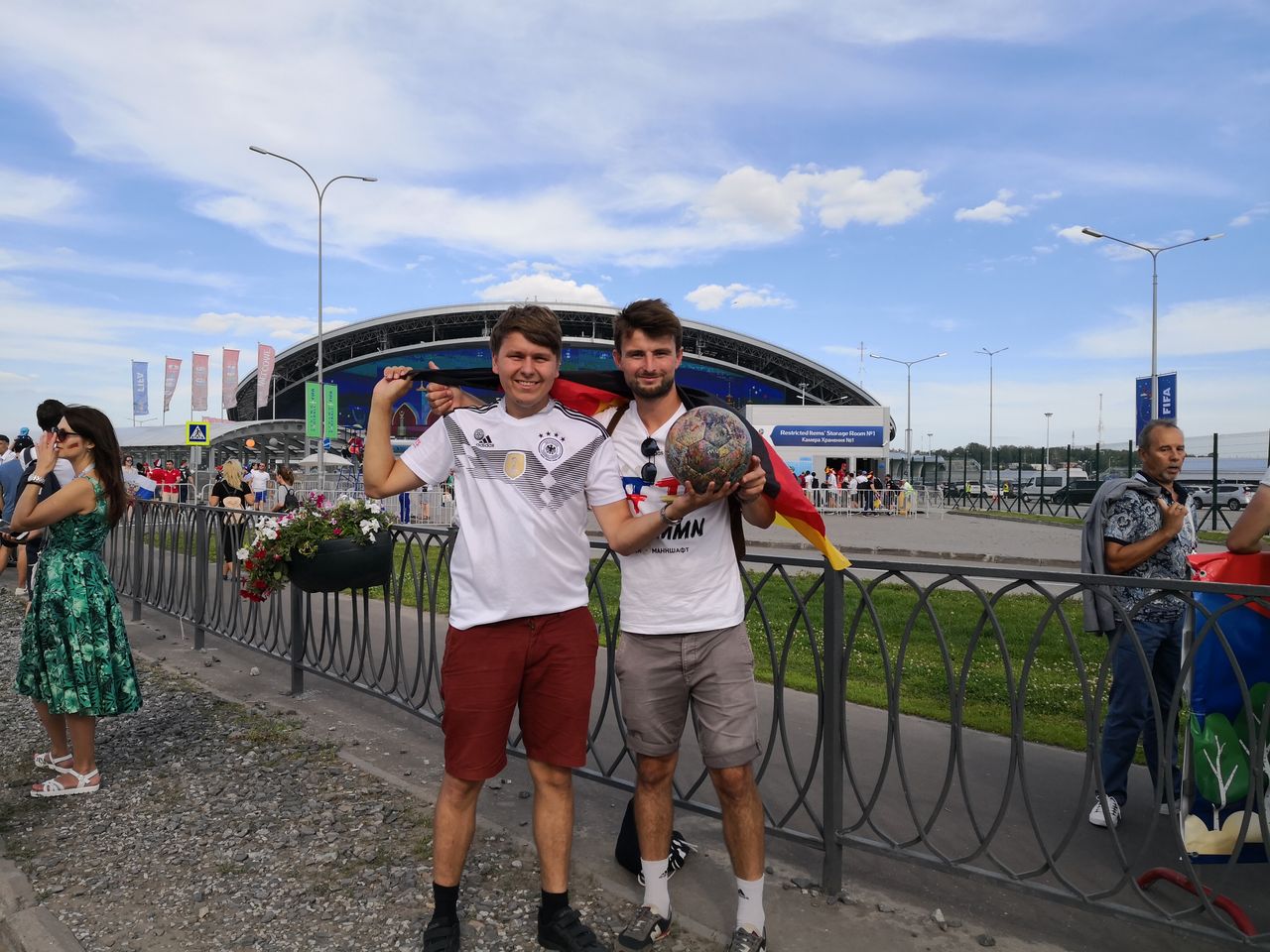 Quickly a small crowd of people gathered, who listened to the stories about the Ball and were ready to become a member of our movement via a header and a signature. We completed the day in a small but excellent bar and watched the game Australia against Peru. Talking about the World Cup – after regaining self-confidence against Sweden, the team around Coach Jogi Löw was now facing South Korea. A victory had to be gained! And the best thing was that the three of us (B&B and The Ball) would see it live in the stadium.

The stadium was sold out, full of fans supporting their idols, and then this: an unmotivated, uninspired game, in which Germany had most ball possessions indeed, but where the game tactics of the South Koreans definitely seemed more mature. Some say that the magic of THE BALL, which had been taken away from us at the entrance, was missing. Quite possible, because what we witnessed was a tired afternoon kick-around. So much for that, guys. A historical drop-out of the tournament ensued, which had to be digested with much shaking of heads and empty glances. 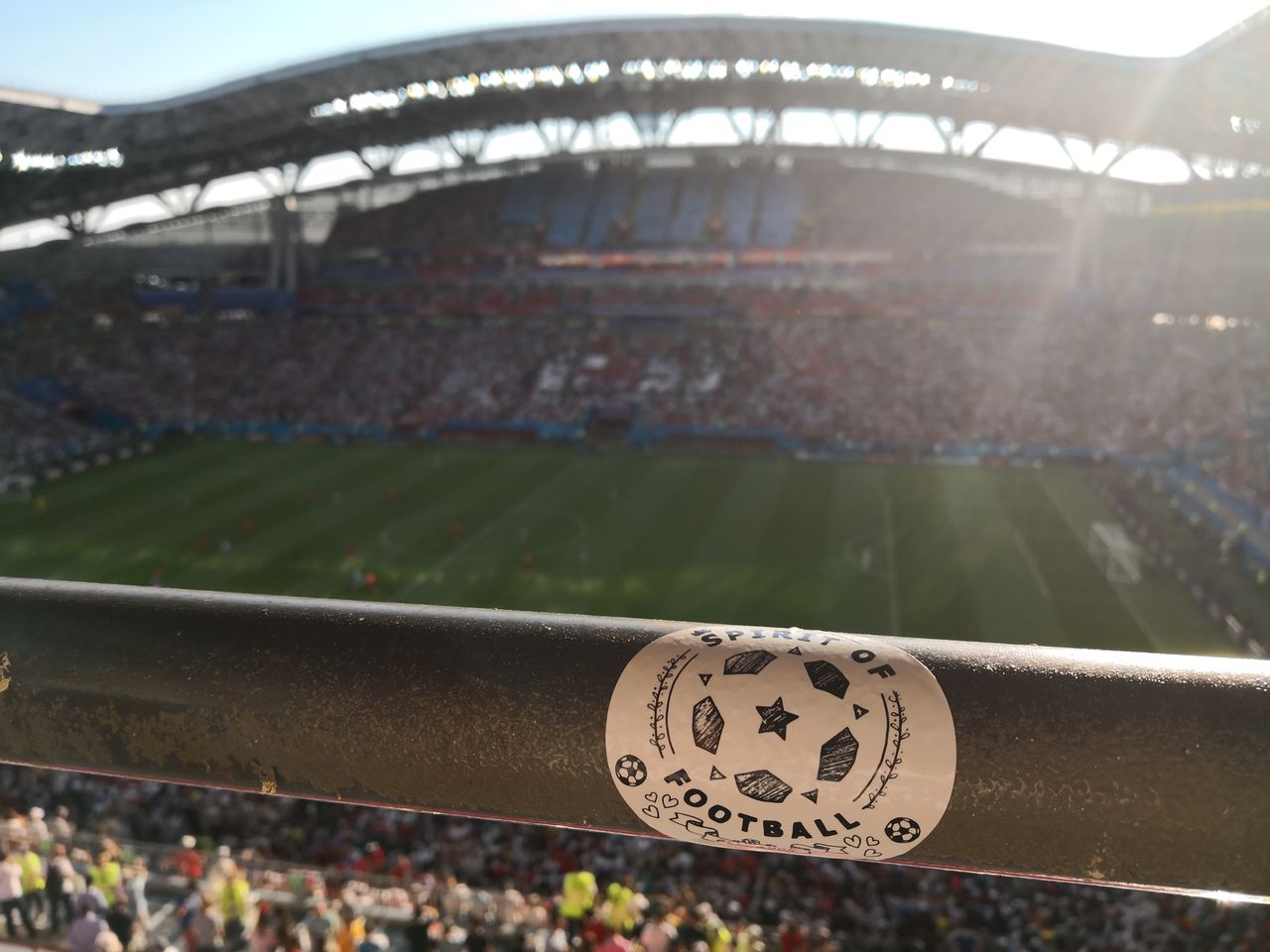 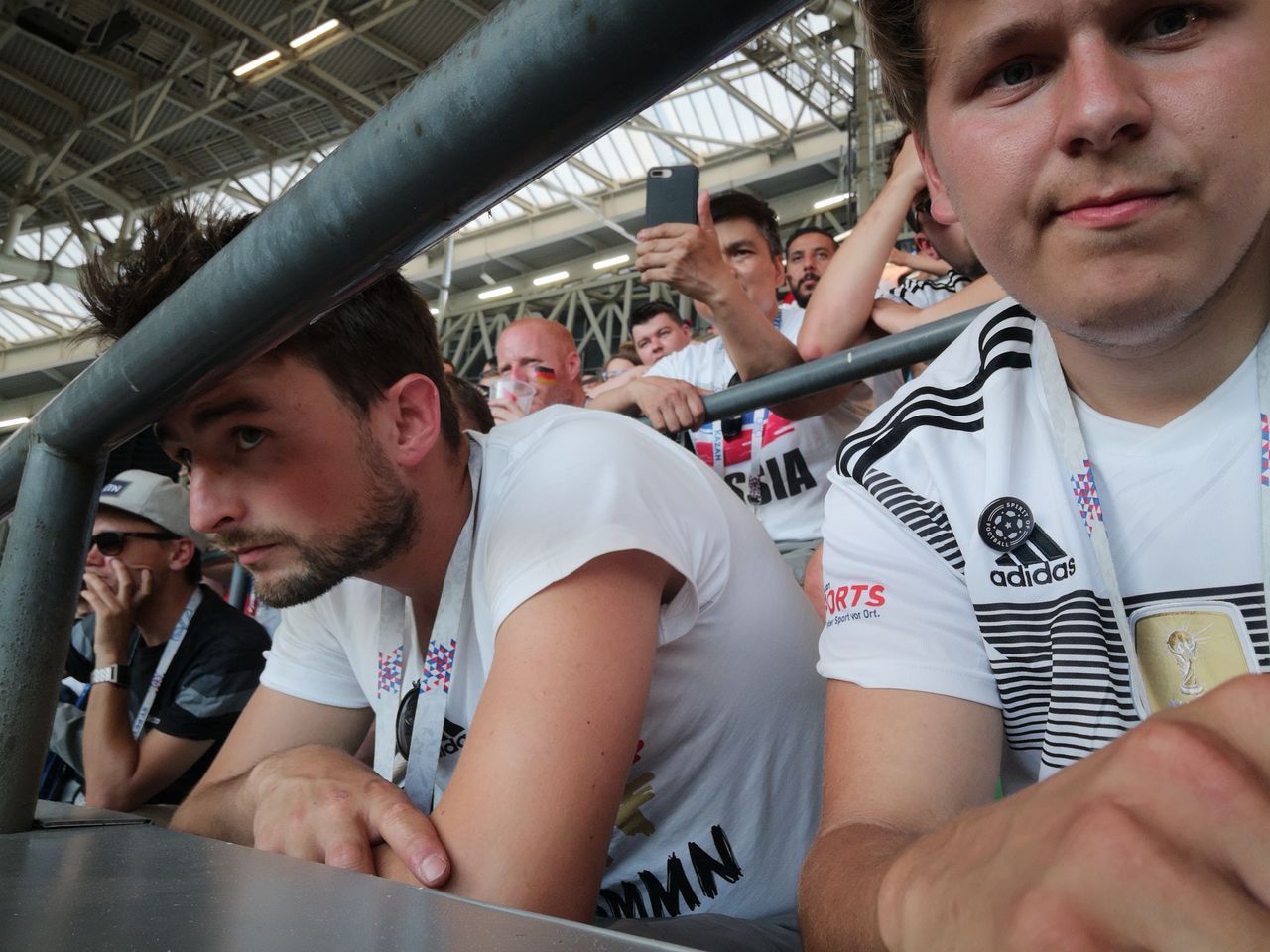 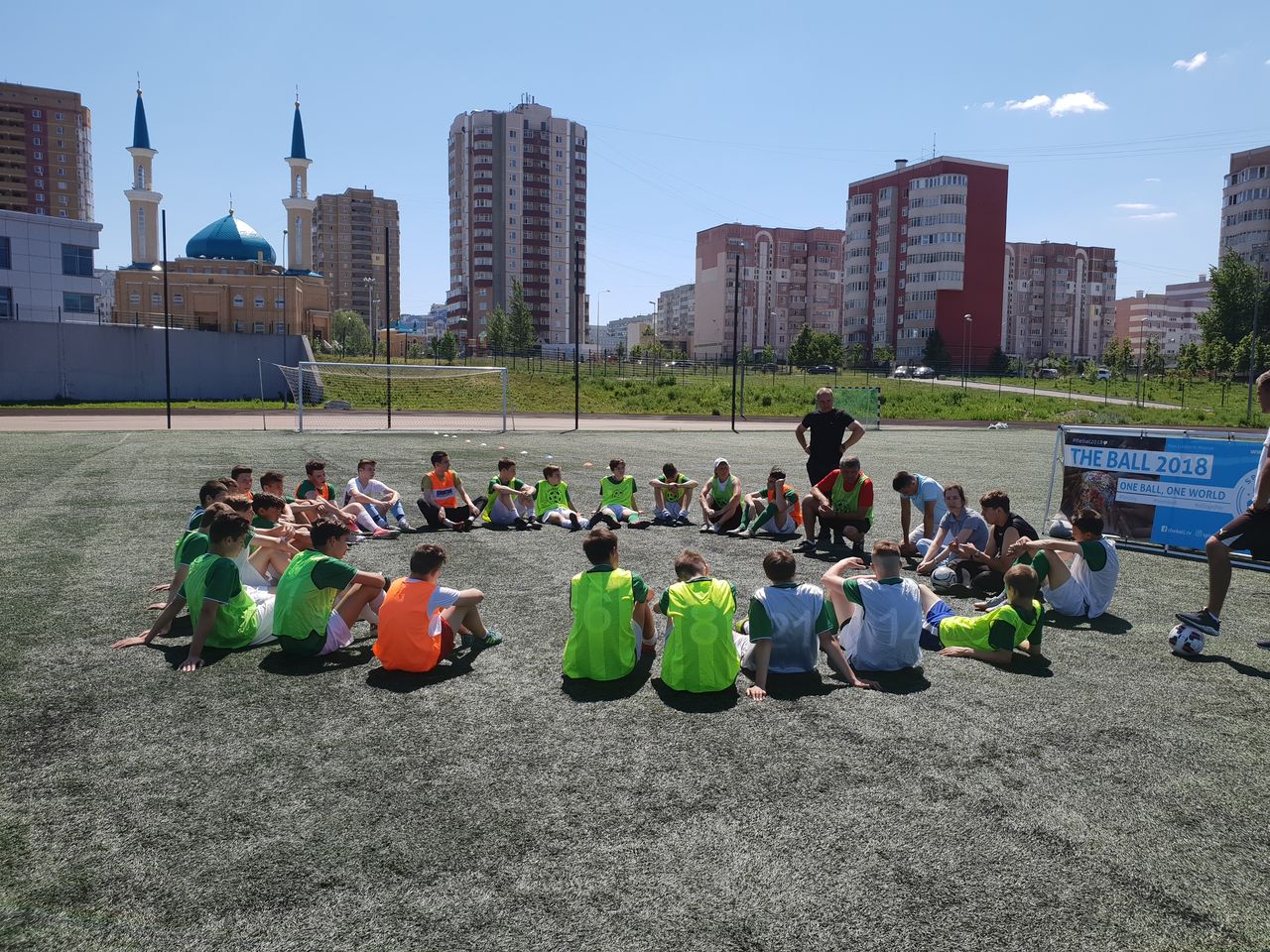 Waking up n the morning, we had to assure each other, that this had indeed really happened on the previous evening! We agreed not to lose another word about it, because, contrary to our national team, we still had another game in front of us. With the smallest Spirit-crew to date, we made our way to a sports school specializing in football, in order to conduct one of our famous fairplay workshops. With about 35 participants, including trainers and students, we had a very varied and interesting project day, beginning with an interactive presentation of THE BALL and its stories, followed by a session of fairplay theatre. The crowning finale was the fairplay football tournament in the small but spruce stadium next door. And it has to be said – these kids could really kick! Our one-day event attracted special guests, such as the president and vice-president of the Tatar Football Association, who immortalized themselves on The Ball. We would like to mention, that a straight football school presents a challenge to us as teamers. Because contrarily to the usual competitive form of this sport, we are not focused on performance. More important are values such as respect, community and teamwork. The trainers and people in charge were enthusiastically with us from the first moment. In our opinion, specifically the kids visiting such institutions should receive insight into the importance of these attitudes.