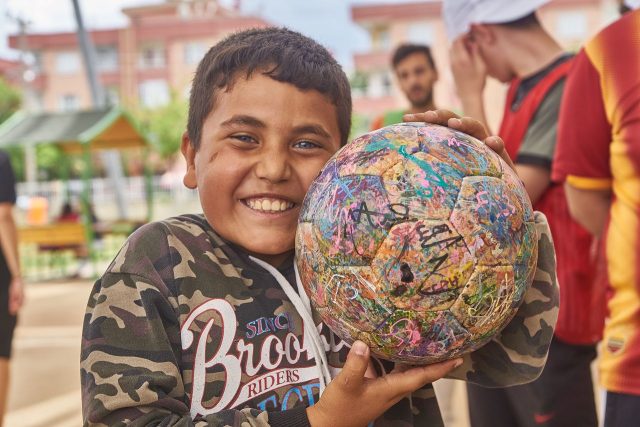 The Ball 2018 kicked off on the 25th of March in the place where the first game of FA Rules football was played – in Battersea Park in London. In the following 14 weeks it visited 20 countries and more than 7,500 people signed their names on it – together they celebrated The Ball’s unique capacity to bring people together and to do good. We believe that The Ball’s message of “One Ball, One World” is ever more important today, offering hope in our increasingly divided world. We at SoF would like to take this opportunity to thank you. Without your wonderful assistance, generosity and energy The Ball 2018 could not have made it all the way to the 2018 World Cup in Russia.

The Ball 2018, SoF’s 5th World Cup (2002, 2006, 2010, 2014, 2018) ball went on an amazing 3.5 month, 27,000 km adventure and it was signed by more than 7000 people. The President of Germany was the first to sign The Ball, prime ministers, government ministers, and mayors all headed and signed The Ball too. Homeless people and migrants in Croatia, Syrian refugees in camps in Jordan and in host communities in Turkey and Lebanon, migrants and displaced children in Alexandroupolis in Greece, as well as all kinds of people of all ages from large cities and in small towns in Europe and Asia were all invited to take part.

Women’s sport remains underrepresented, under supported and undervalued. In many cultures, women are forbidden to play sport at all. The Ball’s journey in 2018 highlighted gender equality in football all the way to Russia. The Ball empowered hundreds of women to do their first ever header of a football and with the help of Equal Playing Field promoted womens’ equality. The first SoF journey to the Womens’ World Cup in France in 2019 is now being planned.

Spirit of Football ran education workshops with young people directly in learning centres in 10 German Bundesliga stadiums. The Ball was signed by German Women’s football legend Babbett Peter and Men’s World Cup footballers like Timo Werner and Mathias Ginter (Germany), Emil Forsberg (Sweden), Ante Rebic (Croatia), Jannik Vestergaard and Yussuf Poulsen (Denmark), who all joined in the message of One Ball, One World, which was translated into many languages as The Ball travelled.

Fifteen Spirit of Football education experts delivered more than 50 fair play workshops en route to and in Russia. Educational projects, consisting of modules of global and intercultural learning, fair play football, theatre and art, set their mark for respect, tolerance, teamwork, peace building and open mindedness. Teachers, professors, students as well as volunteers in schools, youth and community organisations, clubs and universities were motivated by The Ball’s core messages of fair play, respect, peaceful coexistence and community. In Kosovo, Greece, Jordan, Lebanon, Turkey, Georgia and Russia SoF trained trainers in our fair play methods and they are now passing them on in their communities.

The Imam of the world famous Blue Mosque in Istanbul recognised the meaning and symbolism, which we also see in The Ball. He said “when all religions, which have been created in order to ensure peace on earth, are not able to accomplish this goal, then we should search for new ways and tools to reach it.” For the Imam The Ball has the potential to be such a tool.

The journey would not have been possible without the support of the Robert Bosch Foundation, whom we thank with all our heart. We and the Robert Bosch Foundation would like to work together with the many new friends and partner organisations from The Ball’s journey to form a network to focus on the goal of strengthening Europe through football. By the end of 2018 a documentary film about The Ball 2018 will be ready for release and we are looking forward to sharing it with you and your networks.

Spirit of Football’s FairPlay Ambassador Jürgen Klopp welcomed The Ball to Liverpool FC and has this to say about it: “Whoever sees my signature on The Ball can feel a bit better for a moment because he knows that he is surrounded by friends, and when he too signs it he becomes a member of our team. I would be happy if you too would join our team.” We hope that you will remain part of our global fair play team in the coming months and years.

One Ball, One World