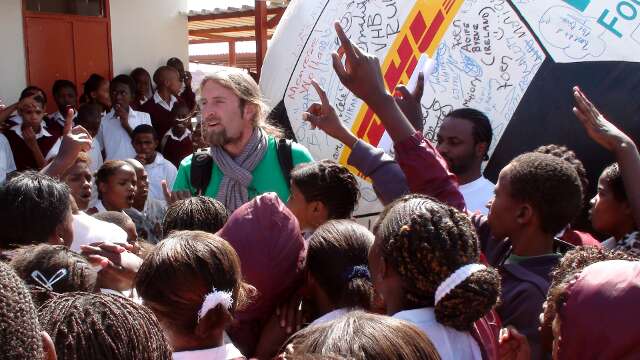 The Ball is Dead

We arrive at the school with The Ball and a giant replica. Alarmingly for us, the teachers are nowhere to be seen. Andrew talks to the kids about The Ball, but struggles to make himself heard above the cacophony of chatter.

Mayhem and cacophony greets The Ball

The children crowd around to sign both balls. And game on… The Ball is kicked around the school-yard in an unruly fashion harking back to the days of village football in England or even the Wall Game at Eton. A huge punt by one young lad and The Ball’s on a classroom roof. 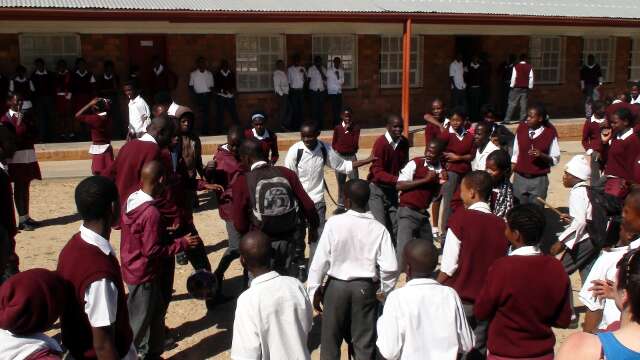 But what’s that? Oh no. The Ball meets a spike on the roof head-on and flops back to earth limp, lifeless and deflated. It needs urgent repairing. We’re a long way from an Alive & Kicking stitching centre and even further from The Ball doctor in Douala. What to do?

We’re recommended a cobbler and that seems like the sensible solution until we hear about a technique for fixing bike punctures. The answer is simple — pump a white sticky substance into The Ball with a syringe. 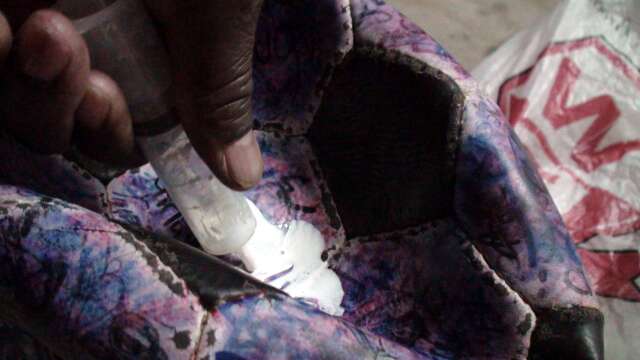 Shake The Ball about, pump it up, bounce it around. And hey, presto, it rolls again… 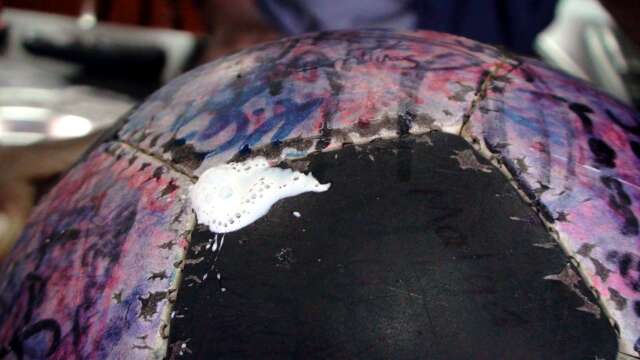 The sticky stuff finds the hole and seals it

The Ball was dead. Long live The Ball. 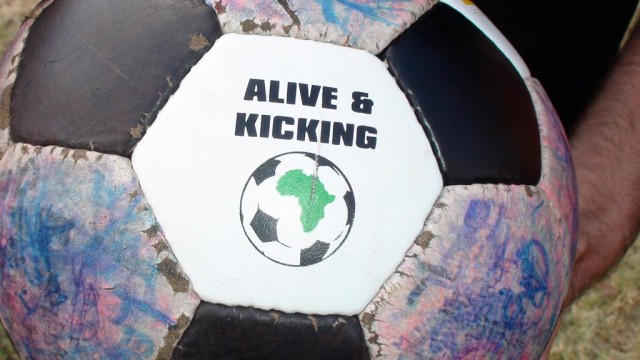 The Ball’s been on the road for well over one hundred days now. Its been played in perhaps seven hundred kick-abouts — on streets, in parks, it even joined the mile-high kick club when it was kicked by pilots in the cockpit en route to Lagos. The Ball has been around the block and it’s starting to look a little worse for wear. Luckily, our partner Alive & Kicking has a stitching centre in Lusaka. 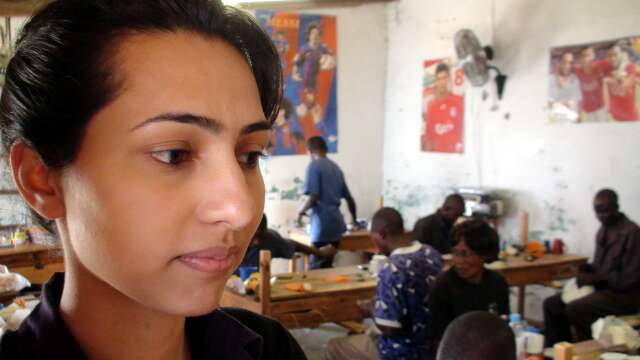 Christian hasn’t seen The Ball being operated on. And the anguished look on his face as The Ball doctor opens The Ball up is one that any worried parent can relate to. His eyes bulge, his mouth gapes… he looks white as a sheet (well, he always does — he’s English).

Before long, five panels have been removed. 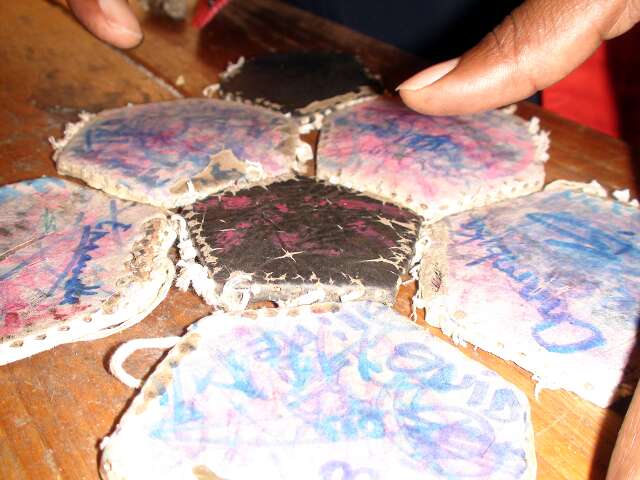 The Ball doctor still isn’t satisfied and looks to get cracking on the bladder. “Stop! Please. Now”, says Christian. She does. 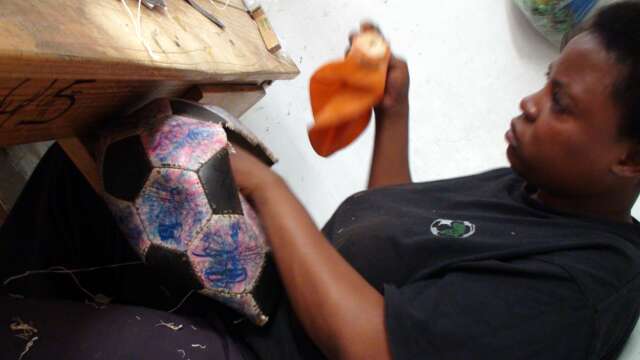 We’ve brought a bladder and a few spare panels from Nairobi. Alive and Kicking provide a few Zambian panels too. The Ball is becoming more African by the day!

The operation is a success but The Ball looks very strange. Even stranger than it did in Nairobi after having 2 panels replaced. The Ball looks rather like the result of a serious head-on ball collision. Two balls have merged into one. 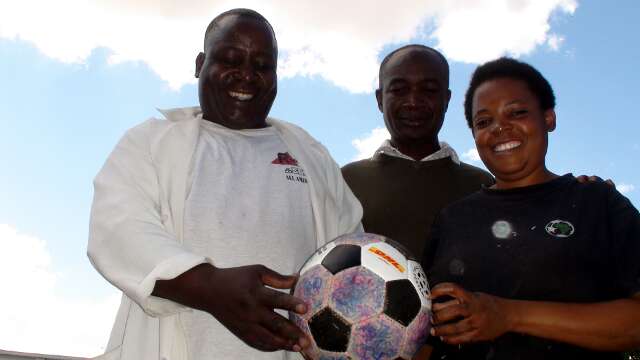 Alive and Kicking Zambia stitchers and The odd Ball

It is going to take a live kicking or ten before The Ball can bounce evenly again.

Tags: Alive & Kicking, Behind the scenes, Lusaka, Project Visit, Zambia
Posted in The Ball, The Journey, Zambia | No Comments » 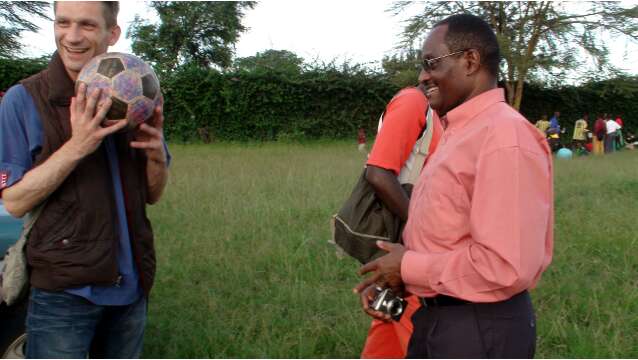 A Player rejoins the Game

England, Somerset, Radstock, Tuesday evening. I walk downstairs after settling my son, Alistair, in his bed for the night. I have resigned myself to my scheduled flight to Kenya being cancelled indefinitely by the intervention of the Icelandic volcano. The TV is showing the news. My attention is suddenly grabbed. Flights are back on — and mine appears to be one of them. With a start, I realise that I might just have put my son to bed for the last time until July.

Ah, the romance of air travel… where did it go? Come to think of it, did it ever exist? As usual, it’s a case of a few hours of fitful sleep, stopovers and sharing personal space with strangers, customs and immigration officials alike. Finally, touchdown in Nairobi. But luggage delays prevent me from joining Andrew at Alive & Kicking to meet Bernard, the maker of The Ball.

And so Joe Karanga, who meets me at the airport (and has patiently waited for me to emerge with my luggage) whisks me off to a project where Andrew and The Ball are rumoured to be waiting for me. And indeed they are. I haven’t seen Andrew since we parted ways in Casablanca. Then in the distance, there he is, camera in hand, and I break out into a spontaneous “ole ole ole”. Reunited for the final leg through East Africa to the World Cup.

But where is The Ball? Ah, there it is. Or is it? This one looks distinctly worse for wear and is, strangely, a weirdly misshapen.

Reunited with The Ball

Andrew explains that many thousands have signed it since I last saw it and that it has just been repaired, two new panels fitted which are smaller than the existing ones, giving it its, ahem, unique shape. Some keepie-uppie immediately reassures me that this is indeed no just any ball — it is The Ball.

Check out the excellent blog on FourFourTwo written by The Ball. “…and I’m pretty. Go on, read me!”

Read me as I roll… with love, The Ball

Thousand’s of miles still to go and thousands of players to play with… Rolling to South Africa for the FIFA World Cup 2010. This ball’s got legs.

Tags: Alive & Kicking
Posted in Cote Ivoire, The Ball, The Journey | No Comments »