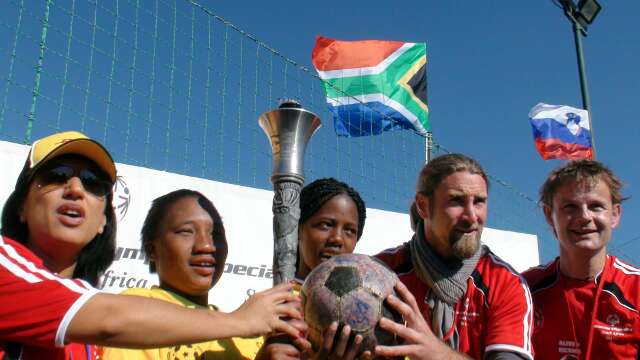 The Ball and the players are looking exhausted from 135 days on the road. The Ball has been a catalyst of love across Europe and Africa. It has brought smiles to the faces of thousands of people. It has been headed, kicked, kissed even licked. It has brought Special Olympics’ inclusive message to the attention of millions of people across Africa.

The Ball has made us (its carriers), not only aware of, but emotionally attached to the fantastic work being done by Special Olympics. Thank you to all at Special Olympics: from volunteer coaches, to parents and athletes you are doing fantastic work. You have shown us and The Ball some of the beautiful energy that this great continent has to offer.

Sometimes, when key players are injured, others rise to the occassion. While several SO South Africa staff were attending a world meeting in Marakesh, Thembile Mhlongo (Thembi) takes charge and impressively organises a fitting final Special Olympics event for The Ball at Signet Terrace Mall in Lenasia, Johannesburg.

The event starts with a short procession led by Special Olympics athletes carrying an Olympic Torch. Freestylers from Underground Soccer, show off their extensive range of ball tricks as the procession reaches its destination. 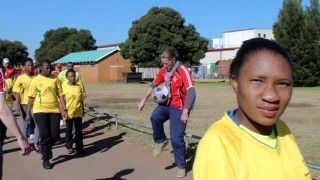 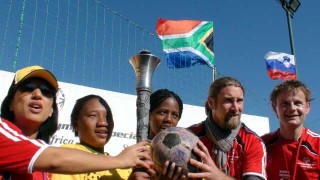 Special Olympics’ Torch and The Ball

After short speeches and a song about The Ball (“This Ball is your Ball”), performed by Phil, it is time for the football to start. Let the games begin. First up is a match on center court between Underground Soccer and a unified team representing Spirit of Football. After this show opening debacle, we won’t mention the score, the real business of Unified Football begins. 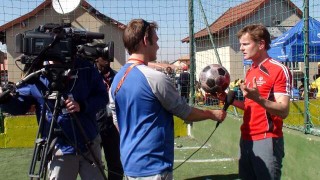 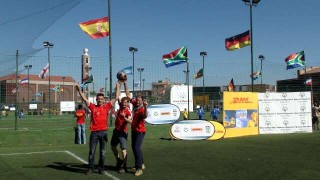 At the end of the tournament there is a winning team, but everyone who participates has won. Local people have been made aware of Special Olympics, athletes have performed well in unified teams and been cheered on, SO volunteers have staged a succesful event, and The Ball has ben kicked and signed by many more people. 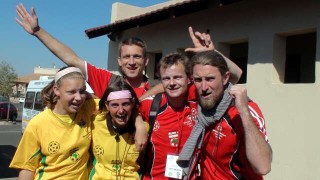 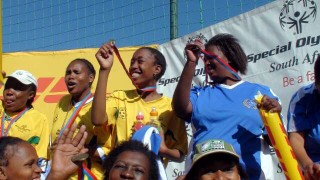 Once again Special Olympics’ athletes are the winners

On behalf of Special Olympics. On behalf of South Africa as a whole. We want to say thank you to Spirit of Football for doing what they’ve done. Clearly you guys need to be given the highest accolade in the world in terms of your commitment to the love of the game, for bringing The Ball all the way from the UK down through Africa. For the simple reason that this World Cup belongs to Africa. If I was in FIFA or in SAFA you guys would have front row seats at the Opening Ceremony. It is one world, one football and one World Cup and it is but one humanity, one love in the world that’s all. Thank you.
— Kay Naido: Volunteer with Special Olympics South Africa

This post is filed under South Africa, The Ball, The Journey and tagged with DHL, Johannesburg, South Africa, Special Olympics, Unified Football. You can follow any responses to this post through the RSS 2.0 feed. You can leave a response, or trackback from your own site.