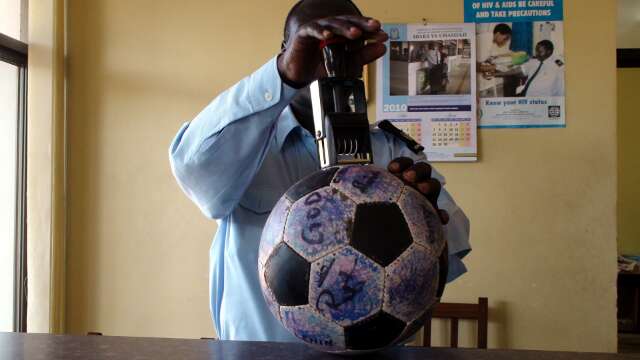 Linesmen of the World

We bid farewell to Blaise and get on the bus, heading out of Dar es Salaam. It’s not just any bus though, it’s a Chinese special. No-one has told us that in order to fit on this bus we’ll have to cut our legs off at the knees. Andrew’s legs don’t fit into the tiny space at all and, with no saw in sight, he takes the aisle seat and stretches out as best he can. 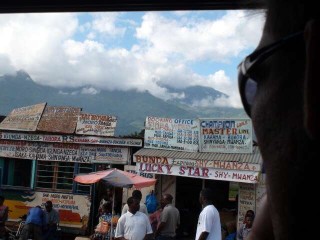 Christian contemplates the next 14 hours

14 hours later and we arrive in Kyela, within touching distance of the Malawian border. At the border, many locals have heard about The Ball and we’re allowed to film The Ball being stamped out of Tanzania and kicked across the bridge that separates these two nations.

We’re expecting a friendly reception in Malawi, which touts itself in tourist brochures as “the friendly heart of Africa.” Our first experiences are, however, don’t match this cosy image. At immigration, we’re told, in no uncertain terms, to stop filming immediately. A visa stamp for The Ball is refused and there are no smiles whatsoever at the immigration desk.

We explain time and again that The Ball has been stamped in and out of every country in sub-Saharan Africa. We even show pictures of The Ball being stamped out of Tanzania just a few minutes earlier. But the Malawian customs officials aren’t persuaded. Not in the slightest.

“If you don’t give The Ball a visa stamp then it can’t come into Malawi” Andrew says.

“Are you sure that you want Malawi to be the only country not to give The Ball a visa?” asks Christian before he lists off the countries that have given The Ball a visa.

Finally, the customs boss relents and stamps The Ball, perhaps thinking that this might be the only way to get rid of these strange guys, but there is no way we’re going to film the stamping. 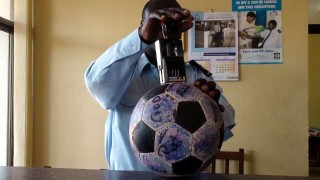 An anonymous linesman stamps The Ball

Borders are a strange concept, particularly so here in Africa where, some time ago, some men sat down somewhere (perhaps in London) with sharp pencils, long rulers and lots of tea and divided this continent up. Border posts followed — and with them border guards, who we affectionately call the linesmen. Thankfully, the linesmen haven’t flagged us offside yet.

The Ball takes a light-hearted poke at the strange concept of borders and nations as it makes its way to the World Cup, paradoxically a tournament that celebrates and sometimes even shapes perceptions of nationhood. The Ball, we think, is about making connections between people regardless of their nationality. In fact, we’d take that one step further and say as we always do… One Ball. One World!

This post is filed under Malawi, Tanzania, The Ball, The Journey and tagged with Karonga, Kyela, Malawi, Tanzania, Visa Training. You can follow any responses to this post through the RSS 2.0 feed. You can leave a response, or trackback from your own site.