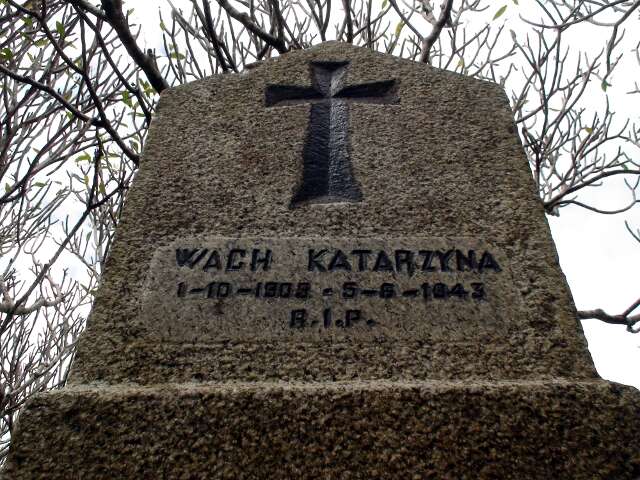 My father never made it back to Tanzania to visit his mother’s grave. As a child, he promised to bring me here and I used to dream of making the pilgrimage to Africa with him. But it was not to be: when I was 18, on the verge of becoming an adult, he died of the cancer that had afflicted him for the previous few years. But today I am here in Arusha, two pilgrimages merging into one.

The ever-reliable Alliy has organised a car and driver for us to head out of town in. Andrew and I jump in, and off we go to look for my grandmother Katarzyna’s grave. It is quite an adventure in itself finding the graveyard, tucked away as it is away from the main road behind various agricultural institutes in the small settlement of Tengeru. 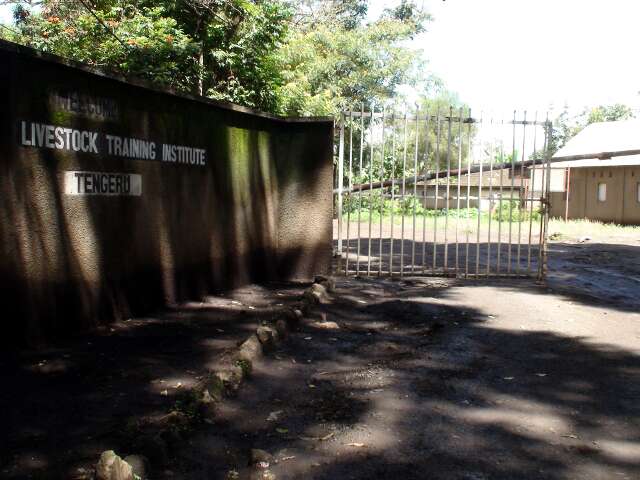 Entrance to the Livestock Institute in Tengeru

Why then is she buried here? Well, as you might guess, it’s a long story. Others have probably told the story with more historical accuracy, but all I can do at this point is tell it as I understand it right here and now.

My grandfather Bronilaw had migrated to eastern Europe from his birthplace in the US — Providence, Rhode Island — some time in the inter-war years. He married Katarzyna, who was from a region which is now in Slovakia, and my father was born in a small village in what was then south-eastern Poland but is now north-western Ukraine. Confused? Yeah, so was I.

Fast-forward to the outbreak of World War 2. The Nazi-Soviet Pact splits Poland in two and the Russians start moving whole populations out of Poland. My grandfather ended up stationed with the Polish army in Uzbekistan, where, in 1942, he died. Sixty years later, on the very first journey of The Ball to the World Cup in Korea and Japan, I found his grave in the small town of Kanimech.

My grandma, father and uncle were separately taken to a Siberian labour camp, where they were to stay for the next two years. At some point, it seems that the Polish government-in-exile came to an agreement with Stalin that they (and many others like them) would be given passage out of Russia. And so began a terrible journey south.

From Siberia by train through Kazakhstan, Uzbekistan, Afghanistan to Pakistan. So many died, lost to the cold, hunger and disease. And yet many made it all the way to the Pakistani port of Karachi, where they were put on a ship and brought to Mombasa, then transported here to Tengeru, in the shadow of Kilimanjaro. 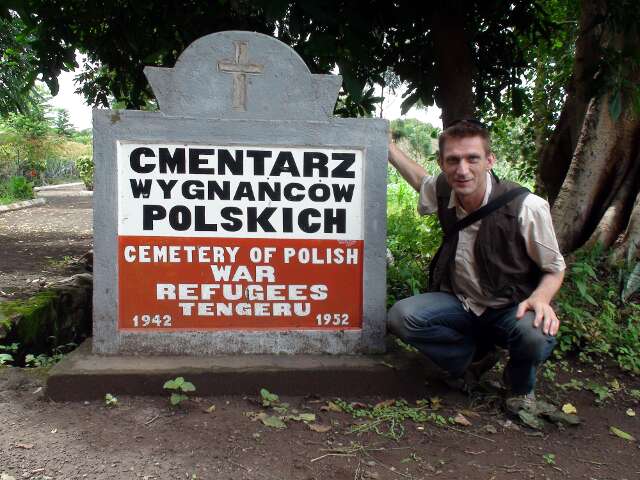 Despite suffering from the effects of a recent earthquake, which caused many of the fragrant frangipani trees to collapse, I am pleased to see that many are still standing and that the graveyard looks well cared for. The caretaker claims that he has not received his salary from the Polish government for four months. Whether this is true, or whether it is his story to extract sympathetic donations from visitors at an emotional moment, remains to be seen. Giving him the benefit of the doubt, I slip him a bundle of shillings. 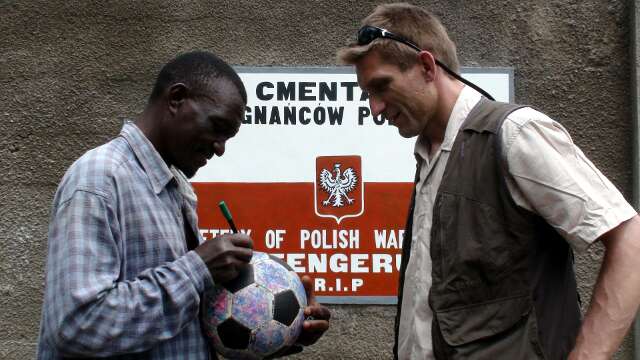 The graveyard caretaker signs The Ball

And anyway, more important matters are foremost in my thoughts. Where is the grave I’ve been waiting so long to see? It doesn’t take long to spot it. The caretaker hands me some “flowers” that my cousin Julia left to decorate the grave. So then, here is the end of two roads — for my grandma Katarznya and for my pilgrimage to see her final resting place. 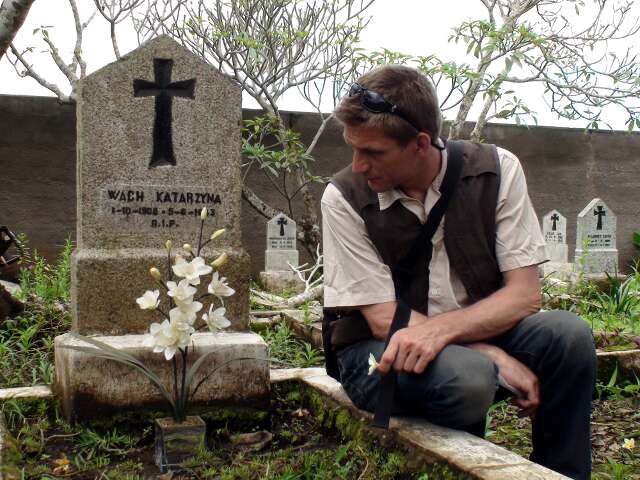 It’s odd, the only thing that I didn’t expect was this: for so many years, it has been in my mind to visit Tengeru, and now that I have, there are two contradictory feelings. On the one hand, a weight has been lifted from, my shoulders – I have fulfilled my internal promise to my father to go and visit the grave… both for myself and for him.

On the other hand is a kind of mourning, not specifically for Katarzyna, whom of course I never knew, but, strangely, for the passing of the need to make a pilgrimage. I no longer have this to look forward to, whether as reality or aspiration. It’s liberating and sad at one and the same time. But perhaps it also frees me to stop looking back for answers to family mysteries — and look forward to vital family realities when I return.

Postscript: a curious narrative collision. Karin, my mum, tells me that, shortly after Katarzyna’s funeral, my father was seriously shamed by the Polish community elders for playing football. I think he might relish the thought that we played keepie-uppie just a few feet from the graveyard gate.