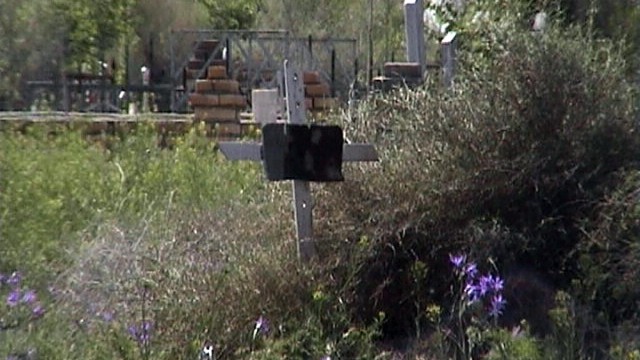 For Richard, Julia, Angela and Jason. Now we know.

Chris sets out to find his grandfather’s grave in Kanimech, a remote village between Samarkhand and Bukhara.

I’m writing this entry as a personal aside. It’s not football related, but tells the story of how I found my grandfather’s grave – something I have dreamt of doing since I first heard the almost impossibly traumatic tale of my family’s exodus from Poland.

Bronislaw Wach, my paternal grandfather, was born in Providence, Rhode Island. How he ended up buried in a cemetery in Kanimech, Uzbekistan has always been a matter of considerable fascination to me. The story has always been shrouded in half-truths and rumour… yet he always seemed a character to whom I could relate, since I too seem bitten by the nomadic bug.

The journey that we are currently making to the World Cup in Japan afforded me an opportunity not only to meet up with Richard, fresh from a long stint in Afghanistan, but also to see if, by any chance, I could locate Bronislaw’s final resting place.

After hooking up with Rich in Samarkhand, the three of us set off with our guide, Shukhrat, to Bukhara. I knew – thanks to the efforts of Julia, my cousin – that Kanimech was located between Samarkhand and Bukhara, somewhere north of the provincial town of Navoi, and that my grandfather was buried in grave 163-1. This was all I knew for sure. My sense of anticipation rose as we drove through the unfamiliar terrain, though so too did my trepidation and anxiety. 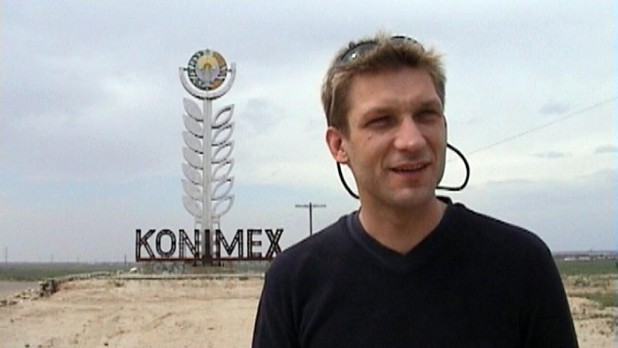 Finally we arrived in Kanimech district, marked, as all provincial districts in Uzbekistan are, by a monument of gigantic proportions. Well at least the town was no myth. A stone mason working on the base of the monument warned me that most of the old cemetaries were wrecked, or in a terrible state of repair. We drove onwards, unsure of how to proceed in the task of finding the cemetery, but, as we drove over the brow of a hill and saw Kanimech lying in the valley beyond, we noticed a cemetery directly on our right. Had we arrived? 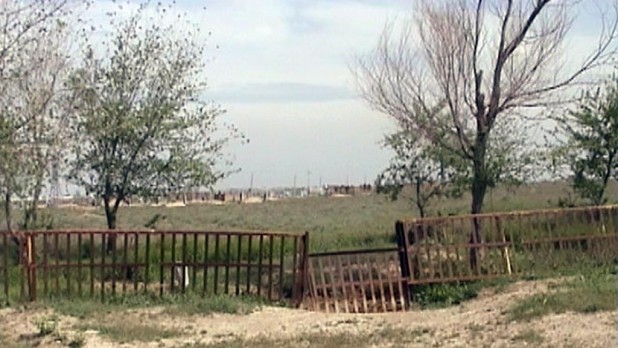 Excitedly, we all leapt out of the car and hopped the fence into what looked like a very run-down graveyard. There could be no doubt that it was in some way linked with Kanimech, but the graves that existed were very new, and those which were old were unmarked. It was an eerie and haunting experience, wandering through a field of bumps in the ground looking for graves that might have a wartime date on them. I felt sorry for those whose remains lay there, untended, unremembered and uncared for. I became more and more morose, thinking that this was perhaps all that I would find.

The day before, however, Richard had suggested that if we found Bronislaw’s grave unmarked, or if we should find nothing at all, that we should get a local stonemason to make some kind of memorial for him. I will always be grateful to Rich for this suggestion, but although it made the search somehow less fearful, I also felt a pang of shame that I had not struck upon this thought myself. Nonetheless, knowing that, one way or another, there would now be something to commemorate Bronislaw here comforted me. As we left the cemetery to drive into town, I resigned myself to this course of action, and Shukhrat seemed sure that we could find someone local to do the job. 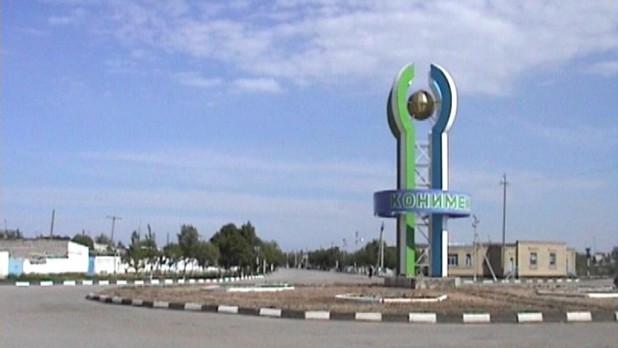 We arrived in the town and drove around for a while… Shukhrat asked a resident where the municipal cemetery was, and we set off at some pace toward the other side of town. I took this to mean that the previous cemetery had not been the only one, and my spirits lifted once more.

Turning right at yet another monument, I saw a newly constructed archway, and as we drew up, it became clear that this was a very different place to the one we had just left. I jumped out of the car, and hurried into the compound, which seemed to be full of the paraphernalia of burial, from the slabs used to wash the bodies to the pile of marble chippings left over from creating headstones.

In a side building, Shukhrat found Khundaybergan, the cemetery guard, who, jumping up from his lunch, gestured for us to follow him, muttering the world “Polska” as we walked. He took us down a tunnel of vines, and when we emerged, we saw this wonderful sight in front of us… 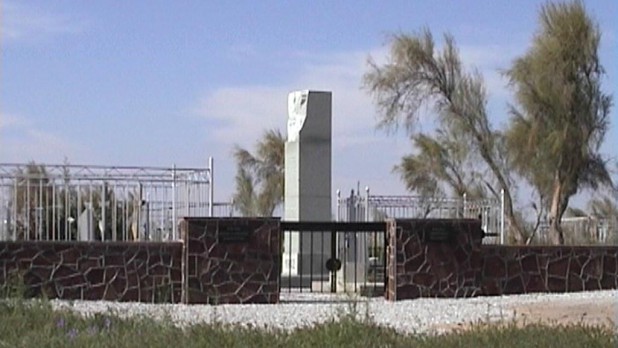 With Shukhrat’s help translating the old keeper’s words, I learned that last year, a Polish company based in Tashkent, had come along and organised some locals to create this beautiful memorial to the 2000 (or so) Poles who had descended on Kanimech in early 1942. Of those who had arrived, 337 never left. 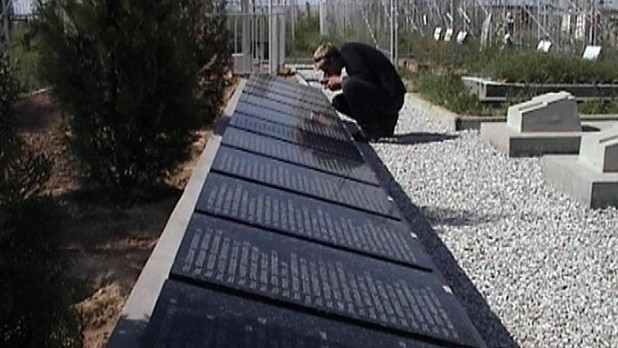 The Memorial to those who died

I dashed inside, half-expecting that somehow, through some quirk of fate, my grandfather might not have been part of this event. To my enduring surprise, I found his name among the list of the dead. 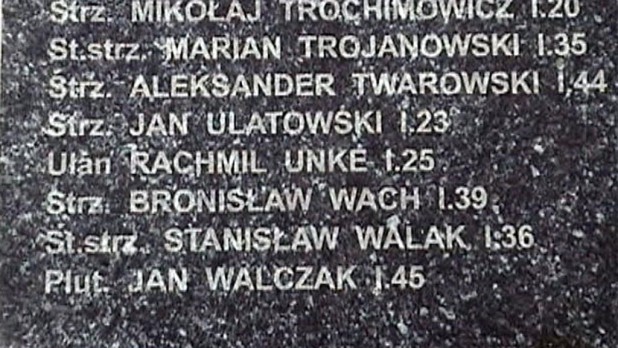 But what had happened here? Why were there 13 plaques with inscriptions? Was it possible that my grandad’s grave could still be out there somewhere in the cemetery? I went onwards, looking for signs of old graves. 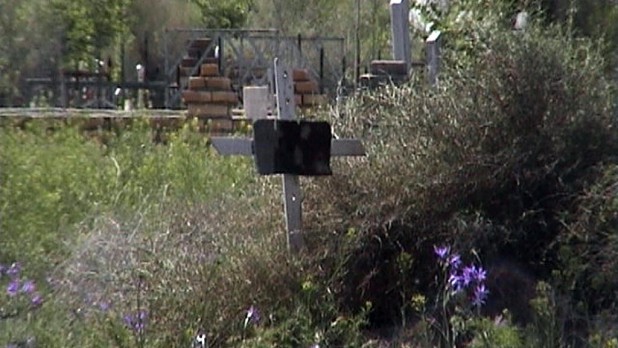 The only remaining grave from 1942

The guard told me that there had been graves like the one above, and that they had borne inscriptions, but over the years the whole plot had fallen into disrepair. The Polish company had, apparently, exhumed what they could, and had reburied the remains where the marble memorial now stood. At first I felt let down – to have come so far, to have come so close, and yet to be thwarted within the final few yards. Yet as I looked around me and began to take in the scene, I saw that what had been created was enough for me to feel connected.

The only remaining steel cross had once been someone’s grave. That person had once had an identity. But the inscription was long gone, and was most likely unrecoverable. Yet in their anonymity, the grave had become common property, and their simple resting-place had become symbolic of all those who had died here. The names of the dead could be seen inscribed in marble a little way off, but this was where I felt Bronislaw lay.

A little later, we returned to the memorial with two old men from the town; Abdullah Adnayev, the local historian, and Pavel Mardvinzev, his understudy. They informed me with a display of great affection and emotion, that I was the first person to have visited Kanimech in search of a lost relative. I was touched by their warmth and sincerity, and as the understudy stood by the grave of his parents (also within the compound as he was of Russian descent) he assured me that his parents would have known Bronislaw, and was saddened that they had not lived to recount their stories of the “honourable” Poles. 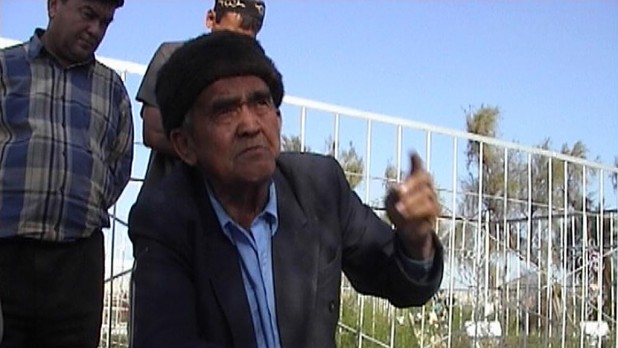 Abdullah Adnayev, the historian who told us tales of the Polish visitors 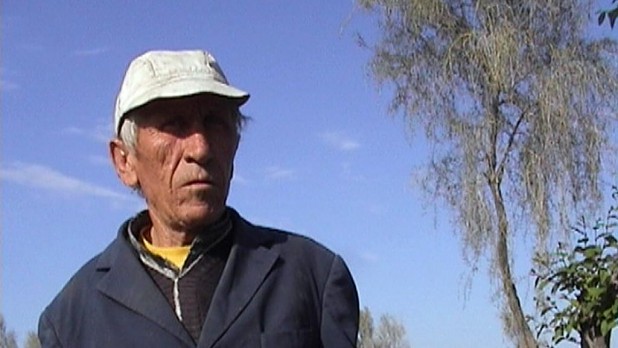 We sat for over an hour by the graveside as the two men, unprompted, told story after story of the events of 1942 and 1943. Shukhrat valiantly attempted on-the-spot translation, but my guess is that they said far more than he could tell us in the brief pauses. I would like to express my sincerest thanks to Phil and Richard, who kept the video cameras running all the while that they spoke. I know that in doing so they allowed me to be there, while they distanced themselves to frame the shots. 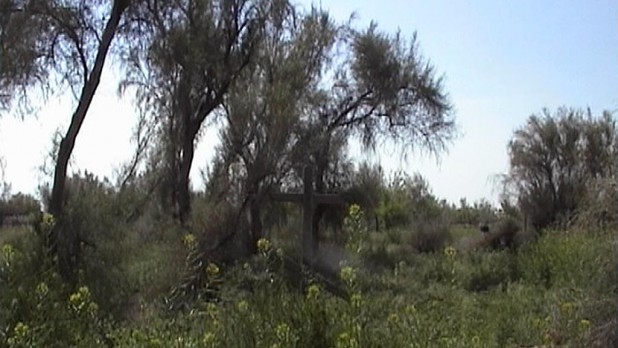 So here, then, is where Bronislaw Wach ended up. And what a tale that must be – crossing continents, enduring hardships beyond my imagination, to be laid low with sickness in this tranquil place. But that story is for another place and another time, while this story is now, and is mine.