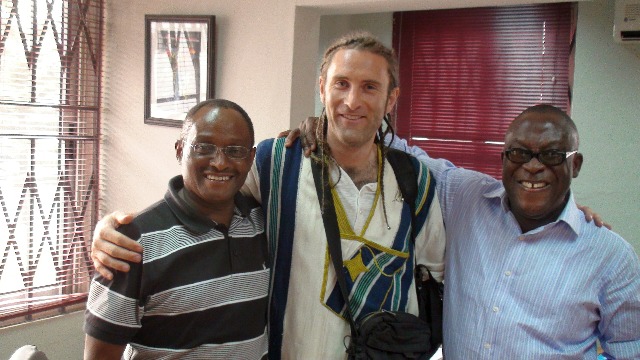 Never say die until the bones are rotting

Samuel Duodu, DHL’s commercial manager for West Africa, is a self-proclaimed talented midfielder, “a midfield maestro”, he tells us. The team that he supports is the oldest club in Sub-Saharan Africa. “Hearts of Oak Accra was created on 11.11.11″ he tells us with pride.

We are beginning to rue a missed opportunity as we could have met up with Hearts of Oak veterans at the club’s former clubhouse in British Jamestown. Instead, we are stuck in traffic from the Volta region coming into Accra.

“They were looking forward to your visit. They would have even sung the club’s anthem for you. It goes never say die until the bones are rotting. “Is there a big rivalry in Ghanaian football?” we ask. “Well, you can talk about Man United v Liverpool or Kaiser Chiefs v Orlando Pirates in Soweto. Here it is Hearts of Oak and Ashanti Kotoko — these two are great rivals.”

In fact, another missed opportunity surfaces. Our original route had us leaving Burkina Faso and entering Ghana from the north. It would have taken us through the Ashanti region where a visit to the Ashanti King was planned — as well as a friendly match between these two great rivals using The Ball in the game.

“Anyway”, Sammy says, “tomorrow I have organized for you to go to Cape Coast.”