“The World Cup should also be an opportunity for us to demonstrate the high standard of our information technology to the world. In this way, it will be remembered as an e-World Cup.”
– from one of Kim Dae-jung’s recent speeches 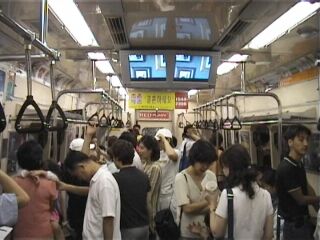 The World Cup matches are screened in the subway trains

Since we’re here running a multimedia weblog, I thought I’d take the opportunity to see what was going on in the digital world here in Korea. This is a report of my discoveries so far.

END_OF_DOCUMENT_TOKEN_TO_BE_REPLACED

Japan, Belgium, Korea and US qualify

Who’d have thought it?

FIFA must be as pleased as the supporters – three countries where football is still in its infancy are through to the second round. Can’t be bad for the competition. Or the advertising revenue, either, come to that…

The Brazilian contingent make some noise.

I thought all the qualifications were well deserved – the Portuguese played negative football in the first half, and paid the price – though I struggle to remember a team so effectively shooting themselves in the proverbial foot. Poland were as good as their word, and helped the Koreans relax by scoring two early goals… effectively guaranteeing Korean qualification. And then Korea did the Amercans a favour by putting them through. Gotta love the irony.

Seoul is booting off at the moment – Koreans celebrating like they’ve won the cup. Which, of course they haven’t. But it hardly matters – they’ve played entertaining football and I applaud their style. Even if they get no further in the competition, they’ve proved that Asian football can no longer be dismissed as second-rate. I rest my case with the Korean goal today. Bergkamp and Gascoigne eat your hearts out. 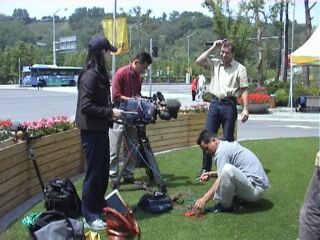 CNN set up for the interview at Seoul stadium

More media action for the FLH team today, with CNN whisking the two of us off to Seoul stadium for an on-camera chat with host Tim Lister. Unfortunately, yet again we couldn’t get into the stadium, so the producer decided that we’d film on the grass in front of it.

Would it become a battle of the acronyms?

Watch the full interview with Phil, Chris and The Ball outside the stadium in Seoul.

END_OF_DOCUMENT_TOKEN_TO_BE_REPLACED 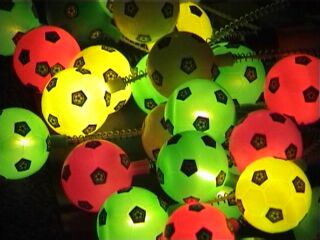 Glowing footballs for sale outside the stadium

FLH headed off to Taejon for this final game of the group, anticipating a lively encounter between two teams playing great football. South Africa needed a draw, and I guessed they would come out with a will to win, while Spain had already qualified, and could relax into their game….

END_OF_DOCUMENT_TOKEN_TO_BE_REPLACED

So then farewell France and Uruguay… seeing the two of you play in Busan, and the torrid 0-0 draw that was the result, I can’t say you’ll be missed. The Uruguay team should by now have secured lucrative careers in Hollywood, while the French failed to score in four and a half hours of play, and with three top scorers in their respective national leagues – frankly c’est incroyable. 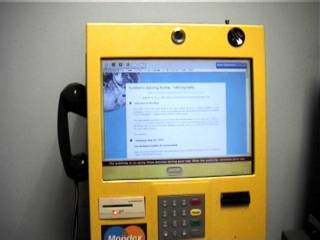 These Korean phones do everything…

…except allow us to figure out how to make a phonecall. Phil even had to retrieve our phonecard with a pair of tweezers. We got a mobile instead. And still can’t figure out how to use eighty percent of its functions. Ah well, at least we can make and receive calls now…

END_OF_DOCUMENT_TOKEN_TO_BE_REPLACED 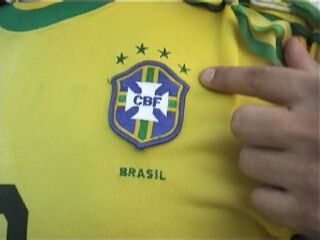 It has long been an ambition of Phil’s to see Brazil play live. While I am not nearly the fan that Phil is, the thought of seeing Brazil was possibly the most enticing football-viewing prospect I could imagine, although I didn’t rate China’s chances much. Still, as a result, the game promised to have goals aplenty, and after our first goalless game, I was looking forward to seeing Brazil put a few away with style…

END_OF_DOCUMENT_TOKEN_TO_BE_REPLACED

Teach your youth to swim, not just to play football! 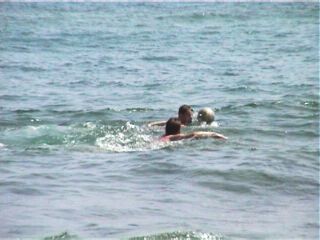 Phew, that was a long way from China

I’m serious – Chongwon beach will claim lives again and again until the people who venture into the water can find their own way out. There’s a sandbank half way along the beach where it is possible to wander forty metres out into the ocean and splash about in the breakers as they hit the shallows. Which is all very well, but there’s also a deceptively strong longshore drift which moves along from east to west, dragging people sideways off the bank…

END_OF_DOCUMENT_TOKEN_TO_BE_REPLACED

At the first World Cup that has had a torch ball-type-thing we celebrated the idea’s First Birthday. Rob had told the Bar manager in Pusan it was my birthday and that my name was Futbel Livingham. This produced much celebratory staff attentions with accompanying fried squid ‘n’ cocktail, and more importantly the announcement on the PA for “Futbel Livingham Birthday”. It was a proud moment for the ball and its journey. 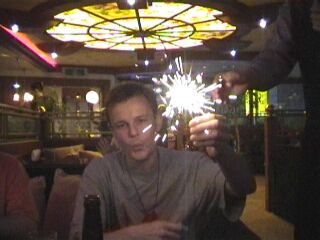 On behalf of ‘footballs leaving home’, I receive the treatment.

Back a the hotel, things got a little raucous…

Big up the little guy