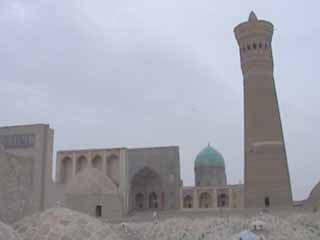 After playing for twenty minutes in mixed teams, the locals suggested we play by the rules they use when the are too many players present. We split into three teams of five. Each time a goal was scored, the team that conceded would be replaced by the team on the sidelines. The two local teams started playing, while we organised ourselves…

Earlier that day, I had met Tim, another traveller on his way to the World Cup, in an internet cafe in town. I’d suggested to him that we meet up later that evening. I told him where we would be filming, and when he turned up at the minaret, we had four players… the fifth was a Tajik on loan from German Agro Action (yep, there really is a charity with that name) whom Richard knew from Dushanbe, and whom we had met at the top of the minaret.

So then, we had a team, we had opposition, and we had a ball. 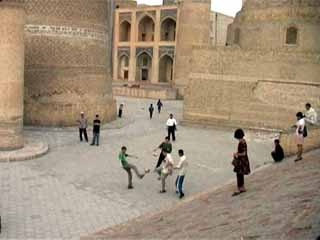 Phil tries to chip the keeper

Unfortunately, we didn’t anticipate just how good the opposition would be. Or how bad we were. Within a minute of taking the field, I managed to thump the ball over the medrassa wall, resulting in a little lad scampering off to retrieve it. In the meantime, we began playing with the local’s ball, and within seconds had conceded a giveaway goal. None of us, it seemed, had figured out who was playing keeper.

The previous team of locals took the field again, and we sat watching for twenty minutes as they battled it out together – great end-to-end stuff, much energy, much shouting, and many interruptions by little girls trying to sell people coffee-table books about the city.

Eventually, we got to play again, but the happy scene came abruptly to an end when Richard realised that our dinner would be on the table, and that our formidable hosts at Farkhad and Maya’s would not be lending a sympathetic ear to us when we pleaded that were defending our honour as football players.