The Ball is football’s equivalent to the Olympic Torch. Every four years, The Ball kicks off from its “Mount Olympus”, Battersea Park in London, where the first official game of modern rules football took place in 1864. The Ball celebrates this moment because it gave rise to a common set of rules which enable the whole world to play together. The Ball’s destination is the Opening Ceremony of the FIFA World Cup.

The Ball has been kicked by Spirit of Football to 5 FIFA World Cups, visiting 50+ countries and meeting more than 50,000 people passionate about the beautiful game and in support of our values of diversity, respect and fair play. On those journeys and in our everyday work, we have experienced first-hand the potential for positive change in the football community and beyond.

What does The Ball do?

The Ball’s first ever journey to the 2023 Women’s World Cup in Australia and New Zealand, supported by the Swedish Postcode Foundation, has 3 main objectives: 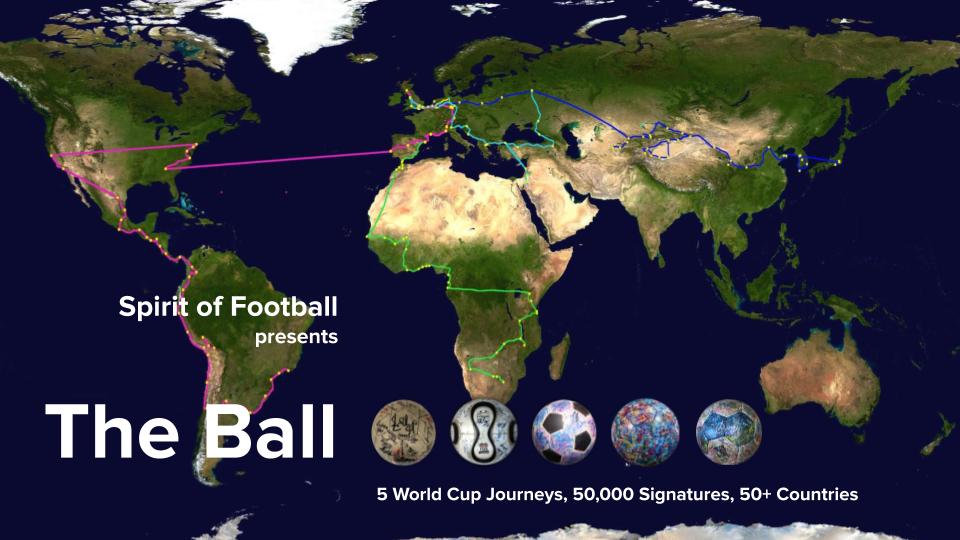 On each of The Ball’s epic journeys to the World Cup, it is played with by as many people as possible along the way to the host country. Anyone and everyone can engage with The Ball, head it, sign it, kick it and help it along its way.

With over three billion football supporters in the world, The Ball acts as a megaphone to provide voice to specific causes.

Where are The Balls made?

Both the 2002 South Korea and Japan and the 2006 Germany journeys The Balls were replicas of the official adidas FIFA World Cup balls. For the 2010 journey to South Africa, The Ball was fairly made in Kenya by the non–profit organization Alive & Kicking. For the 2014 journey to Brazil, The Ball was made by prisoners enrolled in Pintando a Liberdade, a rehabilitation programme which rewards good behaviour and up-skills. For the 2018 journey to Russia The Ball was a fair-trade ball made by Derbystar. The Ball 2022-23 will be once again fairly handmade by the charity Alive and Kicking.

The Ball 2022/23 project will focus on climate action, fair play and gender equality. It will encourage individuals and organisations to sign-up and take climate action. Spirit of Football fully recognises the need to promote rapid global action on climate change now. The Ball will use the unifying power of football to assist in responding to this truly One World crisis.

This journey will demonstrate the possibilities and challenges of carbon neutral travel. The Ball will especially target the football community: collecting climate pledges from individuals (fans), organisations (clubs) and governing bodies. It will use these commitments, supported by academic research, training and TV/Film to advocate for the change we urgently need to see.

People often ask if we have a spare ball, in case we lose the one we are carrying. “No,” we reply, “there is only One Ball and only One World, and we have to look after both of them.” Because of this, “One Ball One World” will be the project title for The Ball 2022/23.

What is the future of The Ball in 2026 and beyond?

The immediate legacy of The Ball 2022/23 Project will be to inform and influence climate action decision making processes in football and sport communities around the world. Especially for both the “United 2026” FIFA Men’s World Cup in Canada/Mexico/USA and the 2027 FIFA Women’s World Cup.

Spirit of Football Germany will transfer learnings from The Ball 2022/23 into its Fair Play Future education curricula, university seminars and business workshops. The Ball will continue to influence and support SOF’s and partners’ national and international humanitarian programmes.