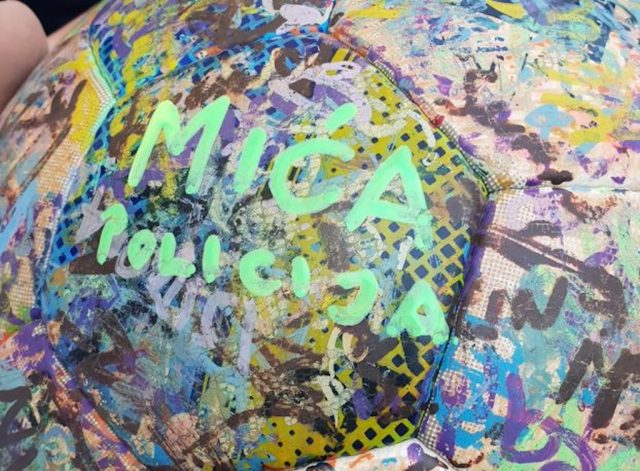 PANČEVO – Where is the Spirit Van?! Shock in the Afternoon!

In order to improve and develop our work, we evaluate our workshops in cooperation with the Robert Bosch Foundation. The very cool workshop-day with the school in Pančevo was coming to an end, and Anna, one of our Spirit teamers, went to get the evaluation forms from the car. She looked at the spot where the car was supposed to be and saw – nothing! She went around the block. No car. She was beginning to think she was going crazy!

There was nothing she could do, so she went back to the school and said to Benni:

Benni probably thought: women and cars… and went to look for the van himself.

He looked everywhere, ran around the block several times, but the Opel was nowhere to be found. For a moment he thought that he was a victim of Candid Camera and that someone had driven away the car… Finally he went back to the school, reported the issue to Tina, our project coordinator of the Goethe Institute Belgrade, and they went off together. Meanwhile Anna told me the story, which I at first thought was a bad joke.

Tina and Benni had called the police. But no message had arrived from the towing service. And they told us, that the car has probably been stolen!

Passports, wallets, credit cards, money, personal belongings – everything was in our minibus!

WITHOUT A CAR, NO JOURNEY TO MOSCOW

We waited uneasily in the school corridor for news from the school staff. Then, at last, we learned the resolution of the riddle: the van had been towed away because it was parked too close (less than the prescribed 70 cm) to the pavement. We are all so relieved that this was the reason for its disappearance!

While Benni and and the German teacher Vesna Milivojević went to have our Spirit Car released, we waited in the school for their return. They got our minibus back for half of the fine and without the towing fee, due to Vesna’s contacts to a former student of hers!

In the meantime we discovered interesting books, such as an old textbook from Erfurt. Since I had time, I leafed through it and learned new things about my home town! Amongst other things, I found an interview with my former teacher, who had once been a school director.

“How small our world is…”

Hurrah – the car is back again! Everyone is happy about the restitution of our minibus.