Aris FC and Spirit of Football

On January 9th 2014, Spirit of Football CIC will kick-off football’s Olympic Torch (The Ball 2014) on its fourth journey from the home of football in London to the FIFA World Cup in Brazil. Aris F.C. fans plan to take part in the kickoff by bringing the blessings of the Greek Gods from Mount Olympus to London with them – in the form of The “Spirit of Aris” Ball, a replica of The Ball 2014.

Aris FC players join the chorus of “One Ball One World” in Greek and Spanish.

Spirit of Football visited Thessaloniki in October 2012 and led an EU workshop at the 3rd Model Experimental Primary School of Evosmos. During this visit, Andrew Aris, a director of Spirit of Football whose family name just happens to be Aris, found out about the spirit of football at Aris F.C. first hand:

“We turned up unannounced at the Aris Sports Cafe and before we knew it, we were being given a tour of the stadium by Communications Manager Nikos Stakias, kicking a ball on the hallowed pitch, and being introduced to officials and fans. It was a fantastic welcome into the Aris F.C. family and very representative of the spirit of football that we felt during our entire stay in Thessaloniki.” 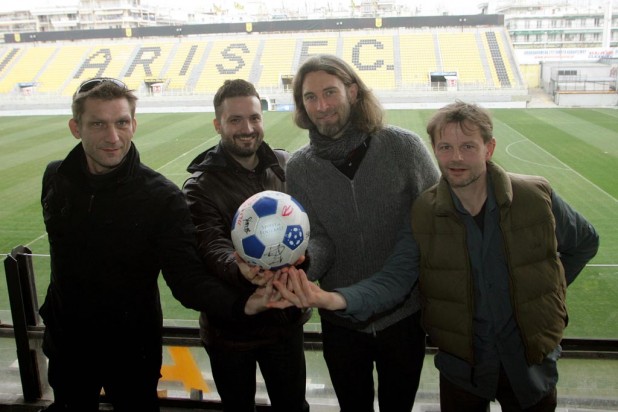 The Spirit of Aris Ball was officially unveiled on Saturday 3 February 2013 with a press conference at Aris F.C. It has already been signed by Aris F.C. first team players, prominent members of Aris F.C. fan groups as well as children from the 3rd Model Experimental Primary School of Evosmos. It is planned that many thousands of Aris F.C. fans all over Greece will have signed the Spirit of Aris Ball by the start of 2014, which is a significant year for both Spirit of Football and Aris F.C. It is not only the 150th anniversary of the first official game of football to F.A. Rules (The Ball 2014 kicks off to Brazil on that very day) but is also the 100th anniversary of the founding of Aris F.C. 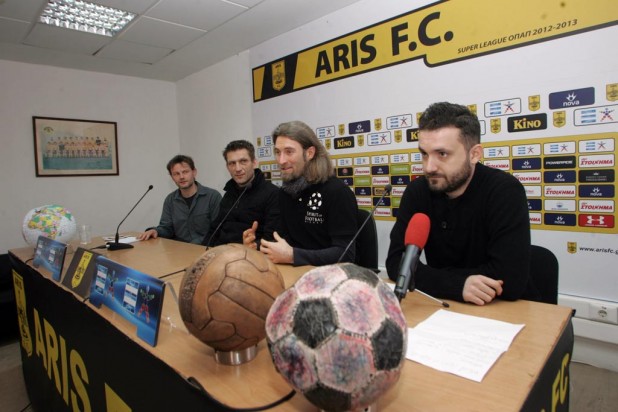 Spirit of Football and Aris FC present the “Spirit of Aris”

Both organisations love football and agree that it is about more than results, transfers, television, marketing and money – football truly is the world’s game and a way to connect people. Those who love this game share a common spirit that crosses borders and transcends cultures. Accordingly, Spirit of Football would like to invite Aris F.C. fans (and indeed all Greek football fans) to sign The Spirit of Aris Ball and follow The Ball 2014 en route from London to Brazil and to share in the spirit of football.