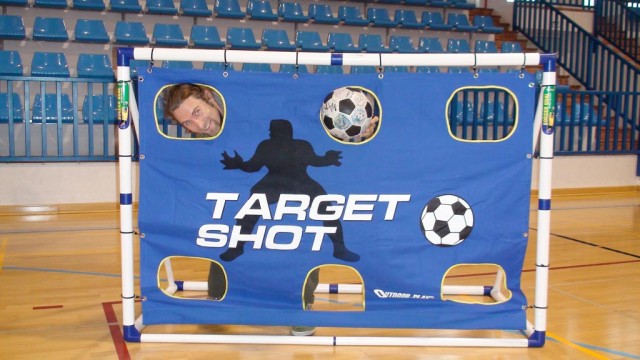 The rain in Spain falls mostly on my head

Scrambling out of bed, packing frantically and heading off to Alice’s school. A presentation to the school assembly followed by children signing The Ball and a kick-about in the gym… 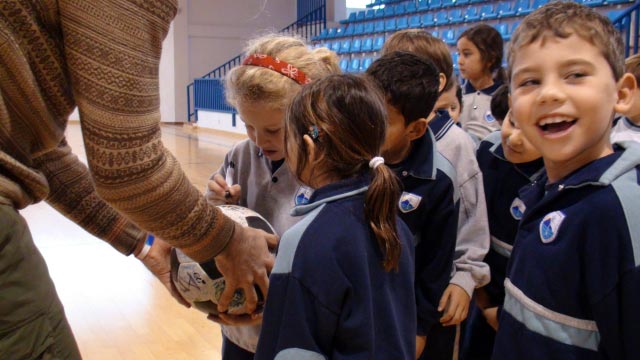 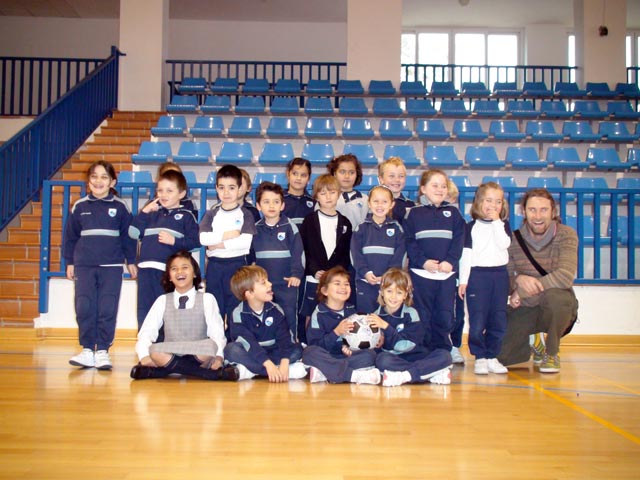 The team at the Laude school

And then off again. On the road: driving through driving rain once more. It has been raining constantly for more than 12 hours now. Avoiding enormous puddles and dirty water rushing down from the hills, we finally arrive at the ferry terminal in Algeciras. It’s finally time to leave Europe.

Tags: School visit
Posted in Spain, The Ball, The Journey | No Comments » 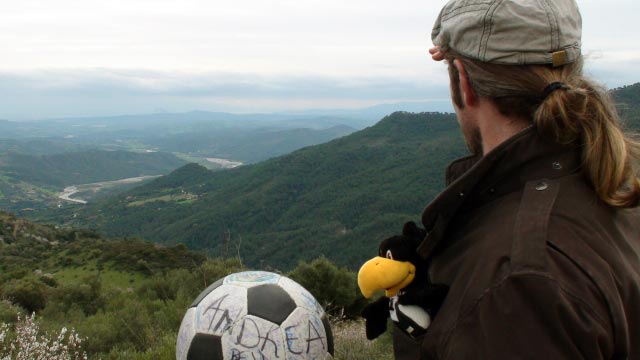 Off to Gaucin on Sunday in search of the first recorded mention of football in Spain. After much hunting around we were directed to the Hotel Nacional.

Inside, a guestbook apparently exists with the note in it written by a certain Captain W F Adams — but the hotel was closed and looked like it wasn’t likely to be opening again in the near future. 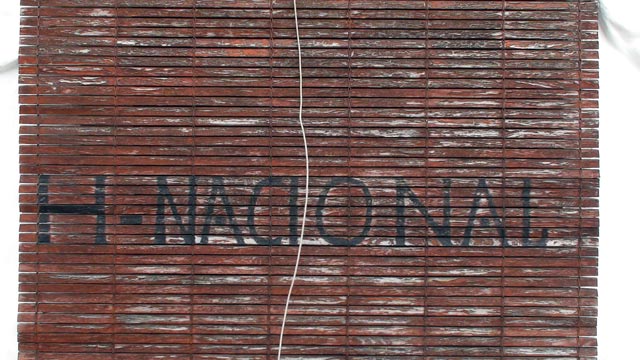 Some doors won’t open and not all roads lead to Rome.

Andrew contemplates the view to Africa

Africa, however, is beckoning…

Nearing the end of the European road

12 hours of driving from Vilanova i la Geltru across Spain and we arrive in Grenada. One night’s sleep and up again to find Grenada rained out. Game cancelled.

Christian soaking wet at the Alhambra

In any case, the clock was ticking again and we had to hit the road. Alice lives in Bel Air, just outside of Malaga and had offered to put The Ball and its carriers up for a couple of nights. As Christian covered the miles I prepared for the BBC World Service interview slightly nervous about the thought of 300 million listeners. A sigh of relief, interview completed in Alice’s laundry room, it was time for some southern Spanish coastal cuisine and some brillant company. The water and the conversation flowed. 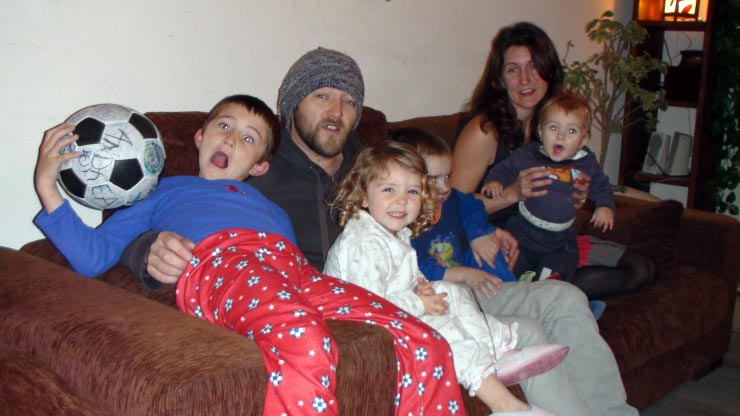 Thank you for your great hospitality! 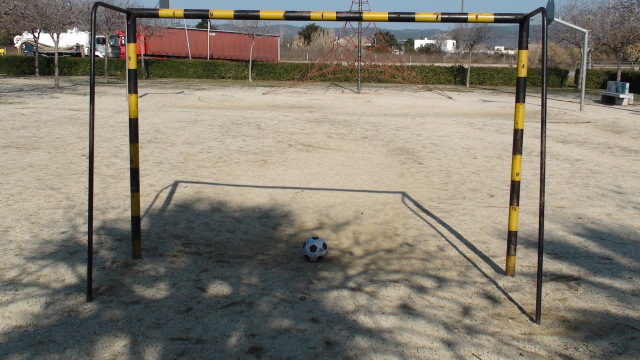 “Where is my bag? Where the — — is my bag?”
“What’s in the bag?”, I asked.
“Ohhhh, nothing important… just my filofax, my passport, my credit cards. Everything.”

Ironically, we’d just been listening to the Hitchhikers Guide to the Galaxy, whose cover says “Don’t Panic” in big friendly letters — but I was panicking. Christian seemed to be panicking too…

The sun had been shining and we had been making good progress towards Valencia. The Ball seemed happy enough too: it was still on a high after rolling around on the grass pitch-side at the Nou Camp yesterday.

A random pitch in Vilanova

We had stopped earlier as we were leaving Vilanova, a random football moment had suddenly appeared. Out of the car, camera at the ready, Christian put his bag down to kick The Ball. Elaborately-dressed children enjoying carnival season marched by singing and chanting. 150 kilometres later, ready to feed our caffeine habit, he realised he’d left his bag back there in the park.

After back-tracking to Vilanova, a friend who speaks Catalan called the police. And you know what? Someone had turned in the bag… And, nothing was missing… 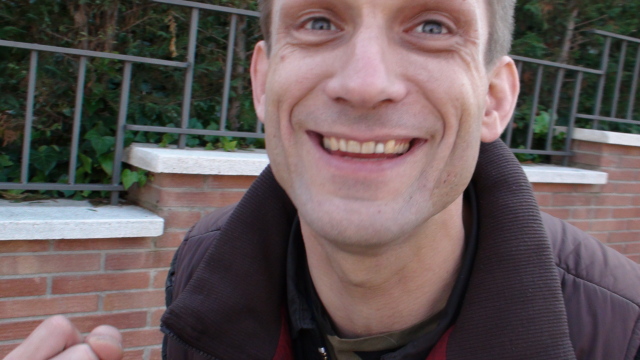 Bill Hicks liked to say that “life is a ride”… but our ride has taken us up and down this toll road two too many times today. As I write this we are speeding off along the coast towards Valencia — again. Adreneline is still rushing like the gusts of wind outside. What a ride it’s been today.

“It’s not Friday the 13th is it?”, asks Christian as I type away. He suggests paying a Homage to Catalunya for lettting him off so lightly for such a grave lapse of concentration… I tend to agree. The ride continues as we head south. 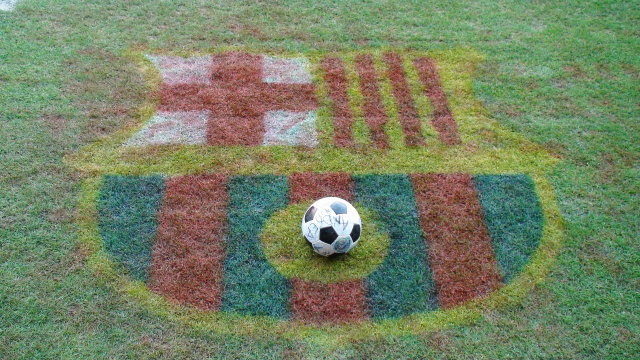 More than just a club

The Ball in Barcelona

“Barca is not just a club, it is more than a club”, remarked our guide. His mother is Barca. His father is Barca. He is Barca. He has the honour and pleasure of being able to work for this great club. He is proud to be Barca.

The Camp Nou is not just any stadium, with a capacity of 98,000 it is Europe’s biggest. Fans flock from everywhere to pay their entrance fees and have their photos taken from the stands but very, very few are allowed to set foot on the field of play. At 10am a call was made to the press liason officer of FC Barcelona. The Ball wanted to visit the Camp Nou. Was it possible?

We turned up at 4pm at Barca TV. Minutes later we were out in the middle, next to the hallowed turf. Memories of the final minutes of the European Cup final in 1999 came flooding back — when Manchester United, in one of the all time great climaxes of the Champions League, defeated Bayern Munich with two extra time goals. 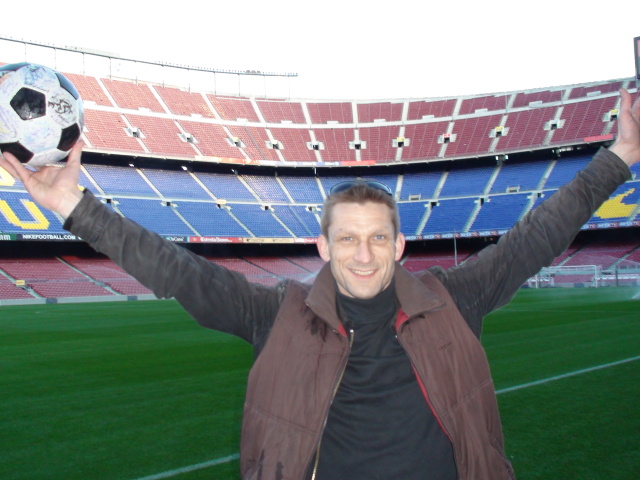 Christian at the Camp Nou 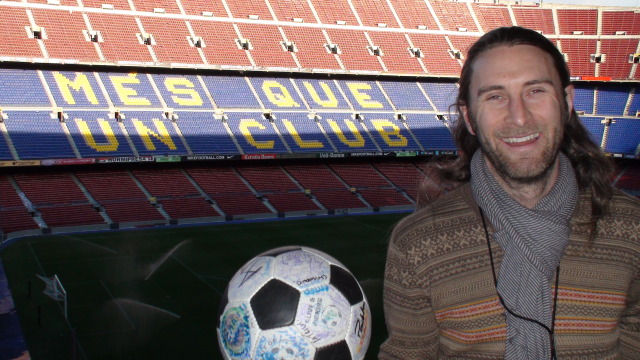 Andrew at the Camp Nou

As we drive away from Barcelona, Christian smiles: “We are in Spain. We just walked out onto the turf at the Nou Camp.” Not everyone gets to step out onto the hallowed Camp Nou turf. Thanks to The Ball and the generosity of FC Barcelona, we were able to.