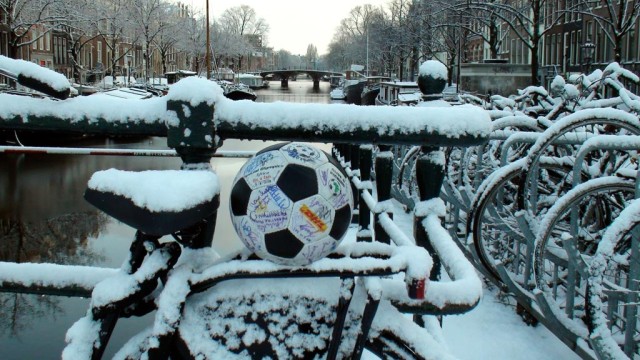 The Ball visits Amsterdam and Leiden

We left that afternoon for Amsterdam with two passengers in The Golf Ball: Manuel (a VFB Stuttgart fan) and Antonio (an actor from Spain and a big fan of FC Sevilla) who found Sven’s offer of a ride on the German travel portal Mitfahrgelegenheit. The two lads were educated in the way of The Ball and both took pleasure in kicking and signing it en route to Amsterdam. Olé, Olé Olé Olé.

Amsterdam. Ohhhh Amsterdam. It was so good to see you again and such a shame to leave a few days later. I lived in The Dam for 8 months in 2000-2001. It was an orange time. Euro 2000. The Dutch were hosting and the town was in total football fever: orange hanging from every window. It is without question the city have most enjoyed living in. Many thanks to our wonderful partner, the Goethe-Institut for putting us up for a few nights in the German Seamen’s Mission in Keisersgracht in central Amsterdam.

On Friday, we travelled with our partner Rainer Manke, Language Director of the Goethe-Institut in Amsterdam, to Leiden. In Leiden, we led a workshop for motivated youths from the Leonardo Da Vinci Sports School. We presented Spirit of Football in one of their state-of-the-art classrooms. We talked about previous journeys, introduced the 2010 journey through video and music — and interacted with the pupils and found out what “the spirit of football” meant to them. 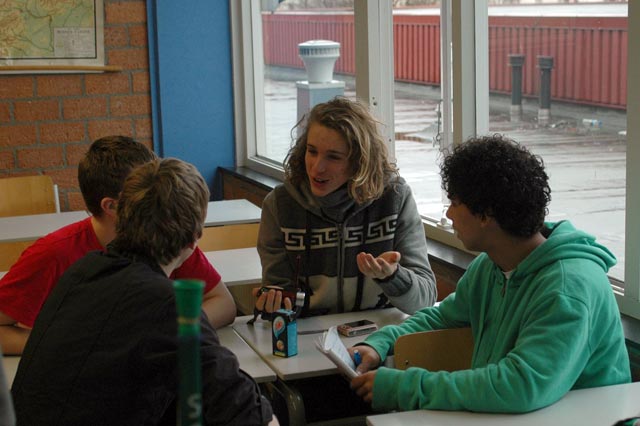 Students discuss the spirit of football

After the education session we headed to their indoor gymnasium to play football with The Ball. Similar to the kick-off in Battersea Park, we played football using the 1864 rules. It was not so easy to play with these rules in a small confined PE gym. Interestingly, the kids managed to figure out the new old rules much quicker than us adults did at Battersea Park a few days ago. The second half was a more traditional game of football. 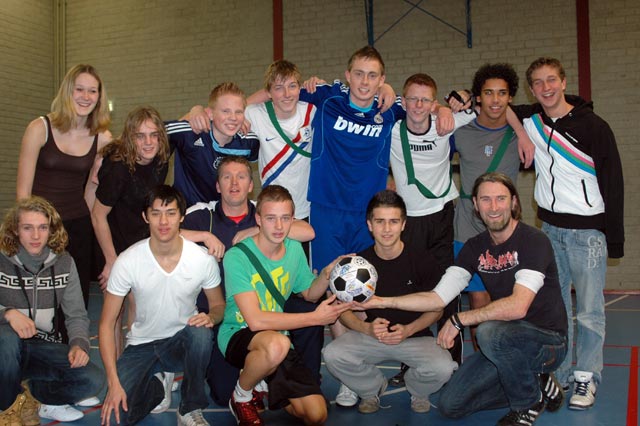 The team at the Da Vinci school in Leiden

That evening Rainer invited us to dinner at his home in Amsterdam. We were treated to bulgogi by his lovely Korean wife. Discussions that evening turned to the role football can play in the classroom. Henrietta, a German teacher in Leiden and Rainer, the language expert from the Goethe-Institut, gave us some positive feedback. They had both been astounded by how the kids had responded to the lesson. They saw that football offers a real opportunity to engage youths and then to explore other topics like geography and history. Sven talked about German history through football, referring back to 1954, 1974 and 1990 — the years Germany was world champion and the social and political situation in Germany at those times.

This lesson was a valuable first for us, as, on our long and bumpy road to South Africa, we have up to 25 school visits. These visits offer us the chance to engage with young people from diverse cultural backgrounds; to discuss football and the world with them; to teach them something and to learn many more things from them. As we were leaving the school in Leiden we were stopped by a group of teenagers who are learning dance, with very little prompting they agreed to an impromptu dance performance with The Ball. Football, music, culture, geography, history, dance, art… they all come together when one talks about The Ball.

In the early evening I hooked up with Holland’s most famous freestyler Abdellah. He’s an Algerian street football performer. He told me that he loves to play around with people. He is not purely a performer, his love of interaction is what drives him. His performances combine playing football in short sided games, juggling his football with others and including all kinds of passers by in the action. He hurt his hand recently and could not show off his famous lamp-post routine: Normally he juggles his ball with all parts of his body without dropping it… all while he free-climbs a lamp-post. From the top of the lamp-post, he dangles acrobatically, always in control of the ball. Abdullah: world famous in Holland.