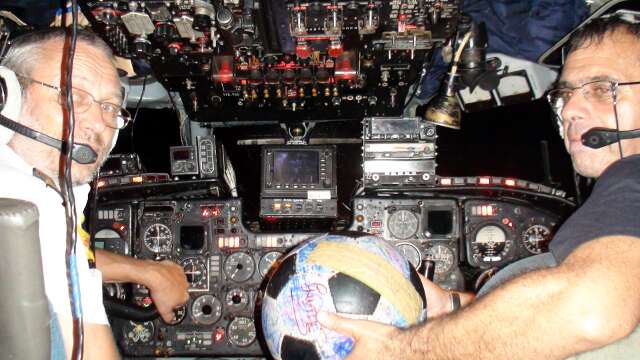 It was right here, at this very airport in Libreville, in April 1993, that a rickety, old Russian military plane was about to take off. It was carrying the Zambian National team to their vital World Cup qualifier in Dakar, Senegal.

The players on that plane made up the greatest Zambian team ever assembled — the pride of a nation. They were dreaming of Zambia’s first World Cup qualification.

The plane, which many had said was unfit for use, had refueled for the second time in Gabon. As it took off, there was an ear-shattering explosion. Every one on board perished.

And here am I, sitting on the self-same runway in the only seat in the cargo hold of another rickety, old Russian military plane — which is preparing for take-off. I’m more than slighly nervous as I listen to the noisy engines and I feel my body vibrate with the rest of the plane. To compound my fears, it appears that smoking is permitted on this flight.

The Ball in the Russian cargo plane

I take a moment to refect upon what might have been for that Zambian team — and to pray that, unlike those poor footballing souls, I live to kick The Ball another day.

Tags: Behind the scenes, Gabon, Libreville
Posted in Gabon, The Ball, The Journey | 4 Comments »