Football as we know it began with a match at Battersea Park in London on January 9th 1864. Voodoo’s origins come from Ouidah, Benin. “You cannot talk about Voodoo without talking about Ouidah” says Casim Marcos from DHL Benin. And there would be no football without a ball.

The Ball has received many blessings en route and we think that one from a practitioner of Voodoo would be a fantastic addition. We arrive in Ouidah and visit the mayor; he stamps The Ball. 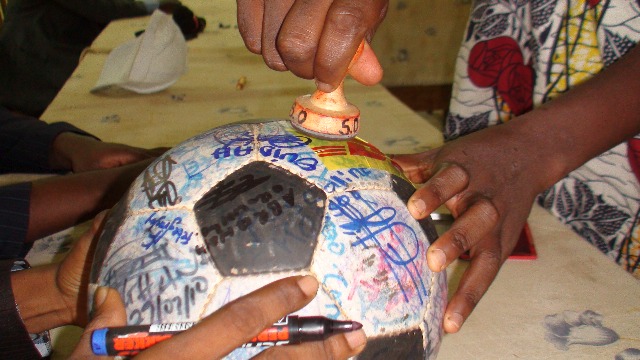 The Ball gets stamped by the Mayor of Ouidah 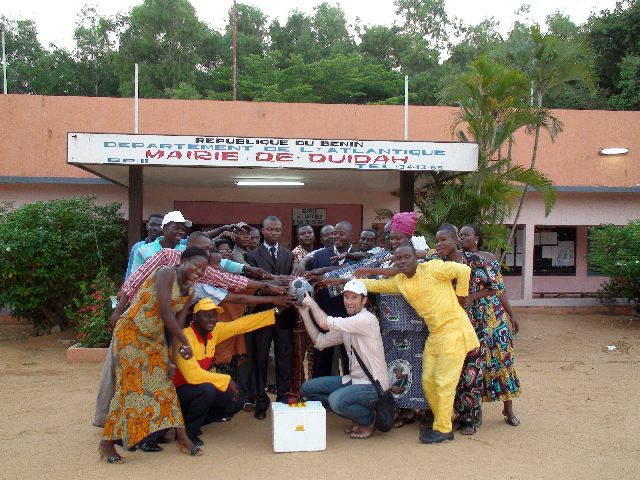 Andrew breathes a sigh of relief that the snake pit he was supposed to visit on the way to the Voodoo Pope is closed – we are too late. There will be no pythons wrapped around his neck and no tip-toeing through piles of slithering snakes, Indiana Jones and the Temple of Doom style, no, not today. As the sun goes down, we follow our police escort, sirens blazing, through the narrow dirt back streets of Benin’s cleanest city. We arrive and are escorted into the Vatican of Voodoo, through a courtyard displaying various carvings representing Voodoo gods and led into the Pope’s private meeting room. 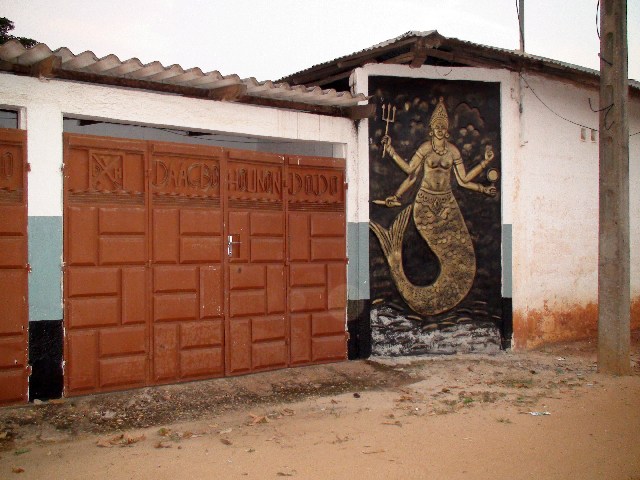 A mermaid shows the way into Voodoo’s Vatican

The compound’s inner walls are filled with art work depicting Voodoo’s beliefs and the different gods of Voodoo worship. 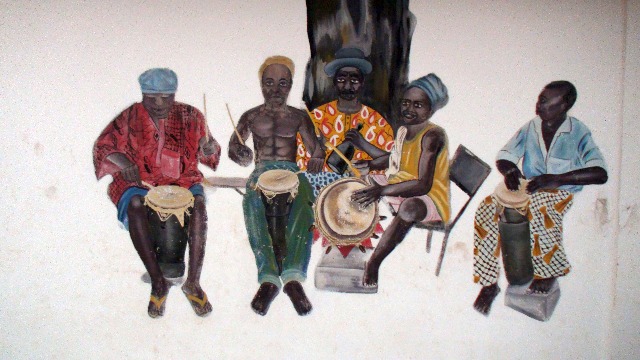 Artwork on an inner wall

After a few minutes the Voodoo Pope enters. Special Olympics’ Director explains to him what The Ball is all about. The Voodoo Pope examines The Ball, looks intensely at all those gathered around, and then calls upon many different Voodoo gods.

The Voodoo Pope listens as we talk about The Ball

Consulting with them and using his powers (as well as those he inherited from his father) he gives The Ball a benediction, telling us that we are on a noble mission. “The gods will protect The Ball and its carriers.” The good news doesn’t stop there. We find out that the gods will also protect the World Cup in South Africa and ensure that it will be a big event for all of Africa. He calls for an African team to win the World Cup. 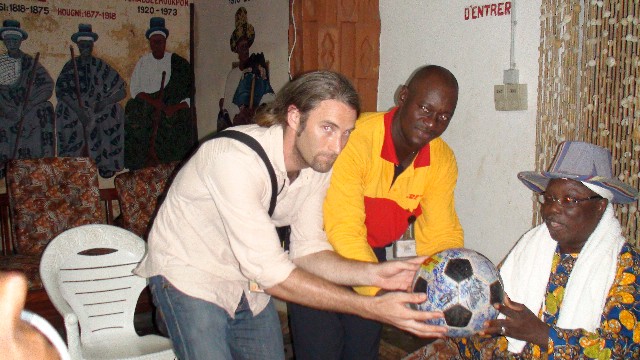 Tags: Benin, Ouidah, Voudou
Posted in Benin, The Ball, The Journey | No Comments » 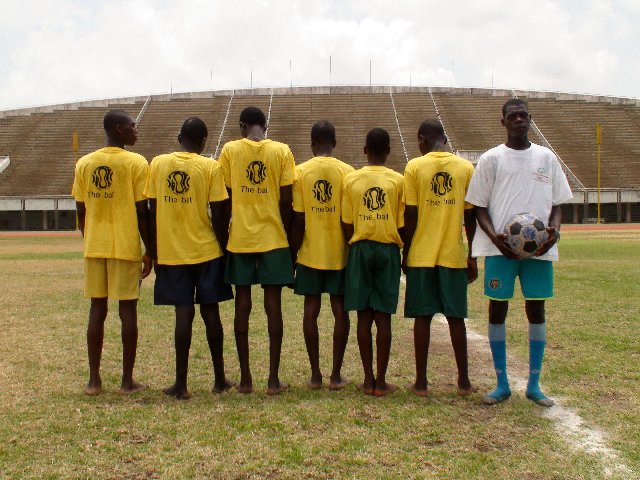 Our highlight Special Olympics event in Benin is a gathering of intellectually challenged athletes, their parents, Special Olympics coaches, administrators and 20 plus volunteers for a free healthy athletes medical screening followed by a Unified Football match. 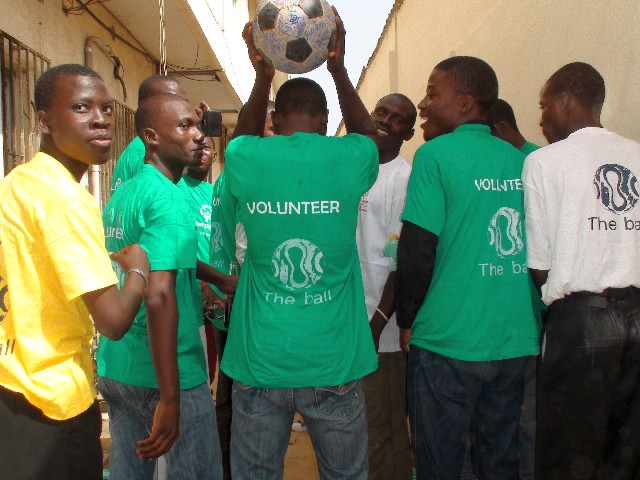 Volunteers with The Ball

The Minister of Sport arrives late (not unusual for dignitaries anywhere) but the screening can’t wait for him (and nor should it). 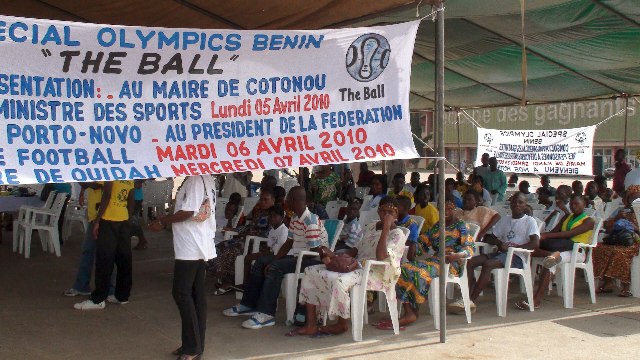 Waiting for the Minister to arrive

The doctors, nurses, volunteers, parents and athletes have limited time and all the athletes need to be screened. That is the priority. Athletes’ eyes are tested (Opening Eyes) and where necessary prescription glasses are ordered for them. 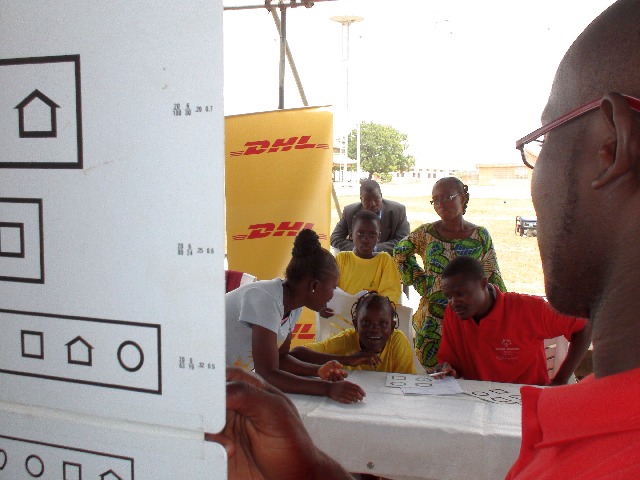 Athletes’ teeth are checked (Special Smiles), where necessary dental appointments are made and each athlete receives a tooth brush and a tube of toothpaste. 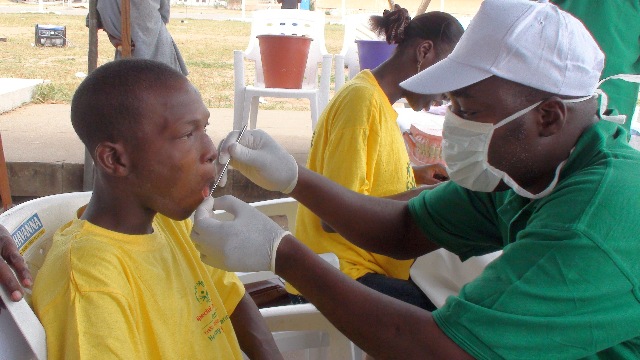 Athletes’ have their ability to listen checked (Healthy Hearing) and appointments made with specialists. Athletes are given a thorough medical examination (Med Fest) and provided with healthy, locally-produced food (avocados, apples, oranges and pineapples) to take home. 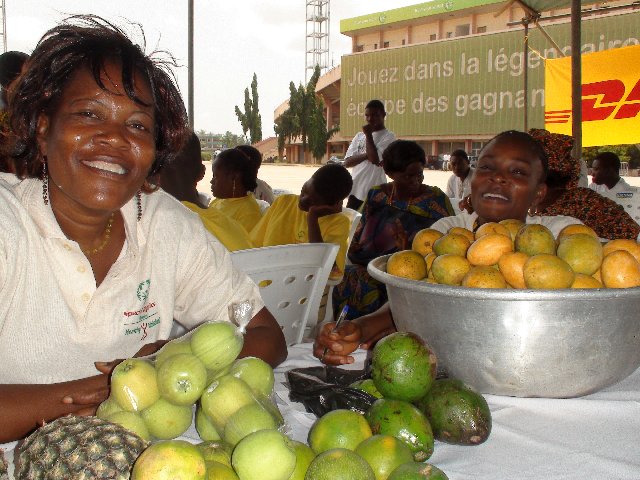 Healthy food is distributed to the athletes

Special Olympics trains doctors, nurses, dentists and volunteers so that they can learn how to work with special needs people. After the screening, the Special Olympics community comes together on the field of the national football stadium — Stade de l’Amitié — for a game of Unified Football after which everyone signs The Ball. 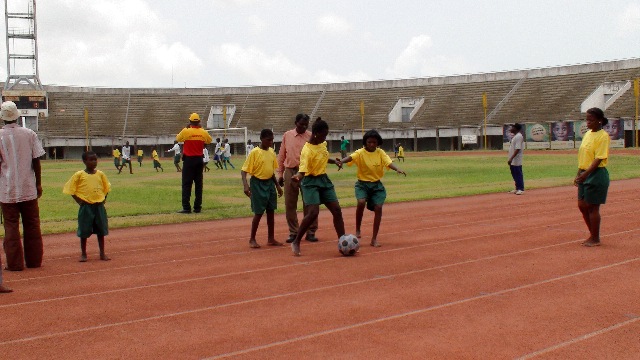 A Special Olympics girls team kicks The Ball about

Athletes and The Ball in the Stadium

Special Olympics athletes in Benin with The Ball

In countries like Benin, where there are inadequate resources for the provision of public health-care, Special Olympics is offering free health-care to intellectually challenged athletes. Healthy Athletes is an important programme and we are honoured to be there. 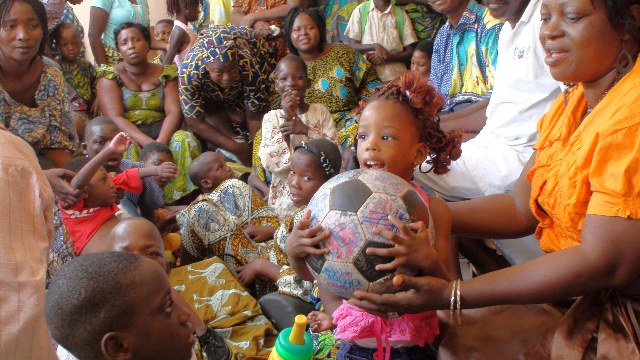 We visit the Centre de Promotion Sociale Cotonou — a social rehabilitation center set-up in 1992 and funded by the Beninese Ministry of Family, Social Protection and Solidarity. The welcome is fantastic — intellectually challenged children and their parents and teachers of the school sing and dance — welcoming us into their center. 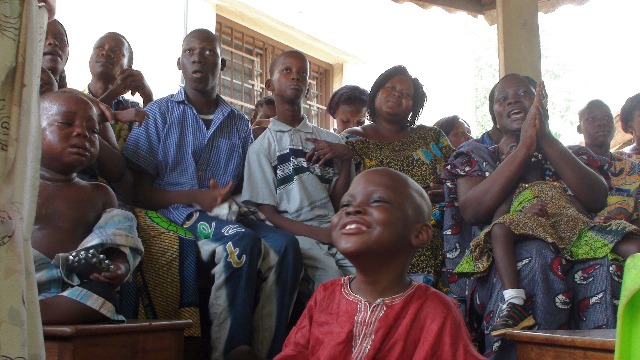 Welcome to our center

This education center acts as a stepping stone for intellectually challenged children, aiming to help them find places in schools and liaising with their families to build a supportive home base. Special Olympics Benin is one of the center’s partners. Two Special Olympics coaches lead sports sessions on Mondays and Wednesdays every week and on Saturdays they run training sessions at the national stadium.

All hands on The Ball

Special Olympics also run their healthy athletes screening, where doctors and dentists come to the center twice a year and run complete medical checks. Children receive free dental care and are supplied with reading glasses if they need them. All of this is funded through donations to Special Olympics. The presentation of The Ball evokes great interest and every single person at the center (intellectually challenged or not) kicks or heads and signs The Ball, then it is time for a kick-about. It is much too hot for football so the game doesn’t last long. 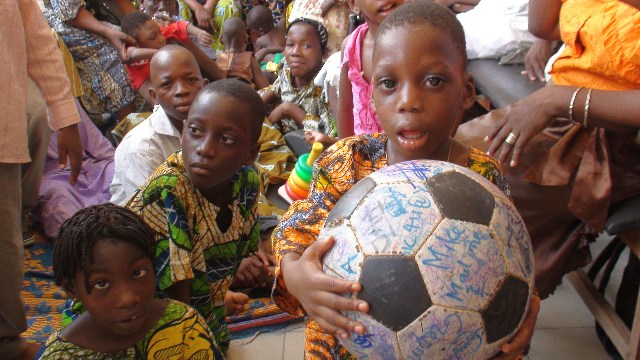 Even the youngest members of the center signed The Ball 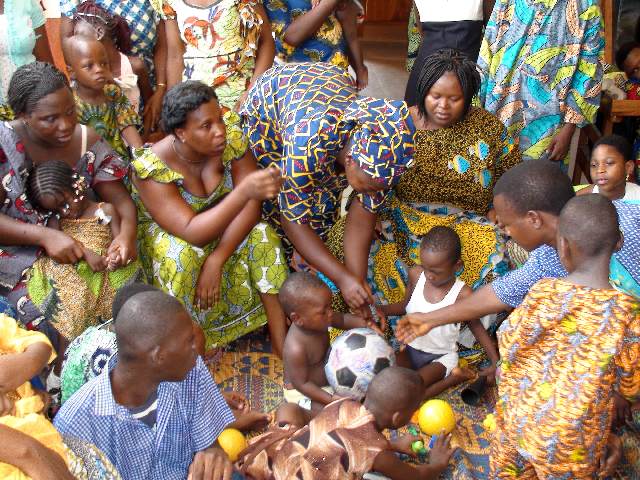 They sang a touching farewell song as we left the centre. 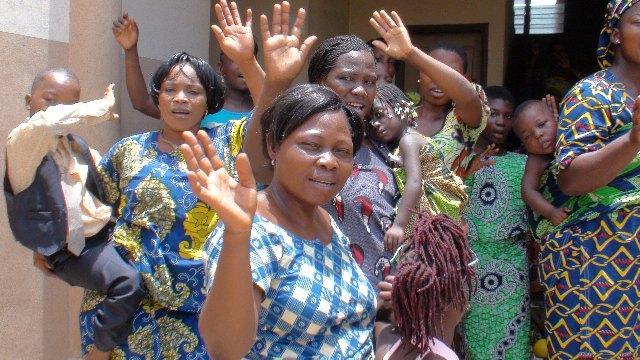 The memories will last much longer and the smiles on the faces of everyone are a testimony to the fabulous work being done by Special Olympics and to the magnetism and magic of The Ball. 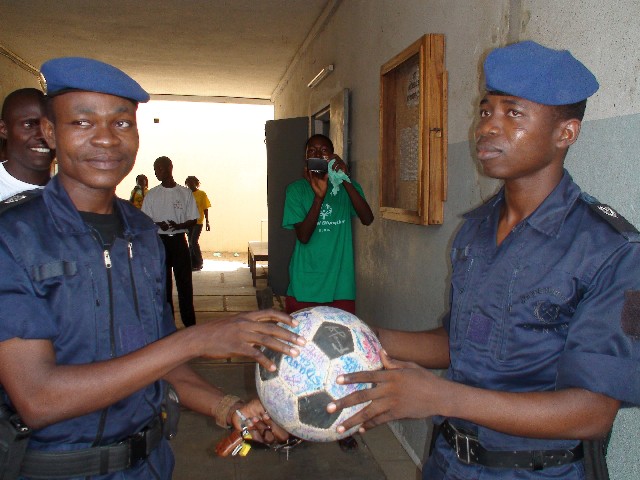 As carriers of The Ball, we realize that we have a huge responsibility to ensure that this one ball makes it all the way to South Africa. Imagine, The Ball is lost or stolen, what are we going to do? The Ball has 6000 unique signatures on it and about one hundred stamps from the 18 countries visited so far. We MUST get this one ball safely to the World Cup.

Regular police officers keeping an eye on The Ball

Starting in Togo, securing The Ball and its carriers became a priority for our partners and even a matter of national pride. “God forbid if anything happens to The Ball in our country”, might aptly describe what our hosts were thinking. This was especially understandable in Togo, where the nation had recently suffered the national tragedy of a terrorist attack on the Togolese national football team in Angola. Benin seems to have gone one step further.

Crossing into Benin we find out that two national guard policemen have been assigned to protect The Ball and that The Ball requires a police escort at all times. 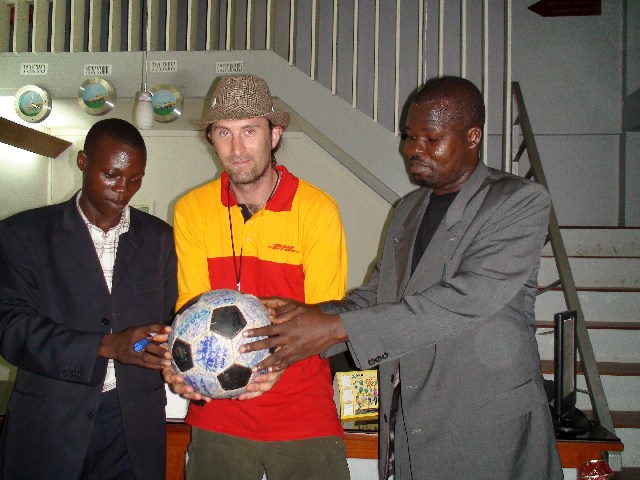 Andrew and The Ball’s protectors 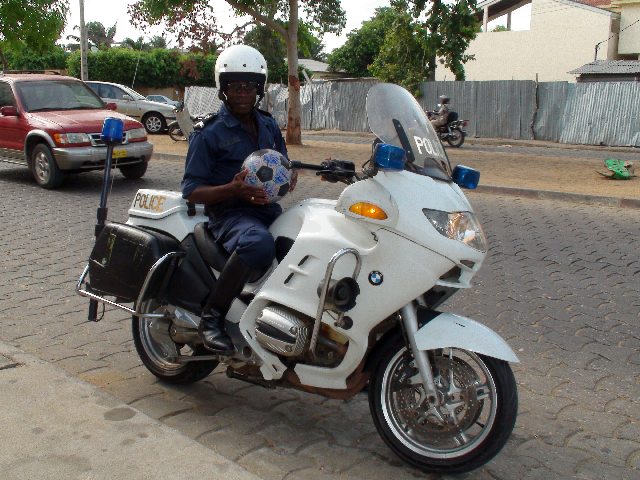 The Ball requires a police escort at all times in Benin

Andrew’s dad used to give him a great piece of advice regarding being in possession of a ball in a dangerous situation — “If in doubt, kick it out”, he used to say. There isn’t much chance of that happening in Benin.

Tags: Behind the scenes, Benin, Cotonou
Posted in Benin, The Ball, The Journey | No Comments »