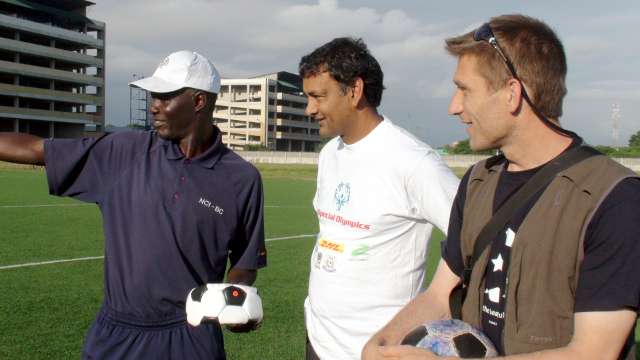 Blaise de Souza, Managing Director of DHL Tanzania, has taken our partnership with DHL to a whole new level. An energetic, witty and (frankly speaking) highly motivated man, he has assembled a formidable team. Blaise gets things done by encouraging people to use their own initiative.

Blaise (centre) watches a football training session at the TFF

DHL’s part in The Ball’s journey has been to organise logistics in Sub-Saharan Africa (by whatever means), provide immigration assistance, bubble-wrap The Ball’s carriers, allow them access to DHL computers and to send video footage back to production partner Africa 10 in Los Angeles. DHL has been a fantastic partner and its staff have often gone above and beyond what is required — but Blaise lifts the bar a notch higher:

Together with Vanessa from ICAL, Blaise has taken control of “Operation Ball” in Tanzania. Sponsors have been acquired: Precision Air, Zantel, Azam, the Tanzanian Football Federation — each plays their role in one of the most ambitious set of events thus far. From airport reception and street cavalcade to stadium tournaments, Blaise has the interests of the most important people at heart — the children of Dar es Salaam.

The legacy of The Ball in Tanzania is that Blaise, Vanessa, the Tanzanian Football Federation and corporate partners will work to support underprivileged and marginalised children through grassroots football initiatives. The Ball keeps rolling, and its impact lives on.