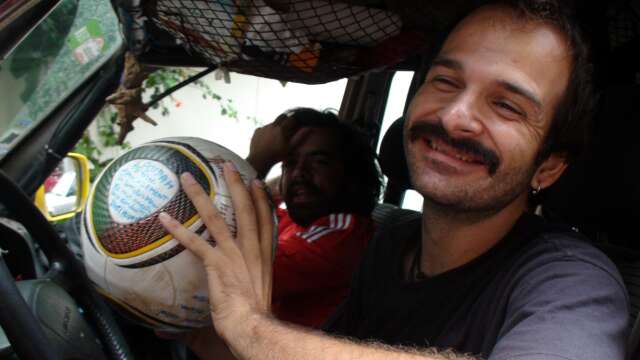 All roads lead to the World Cup 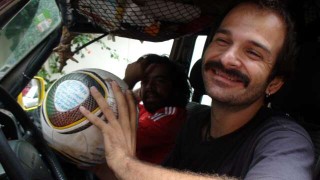 Back in Casablanca in February, Nicole Matuska had told Christian and me about a group of Portuguese journalists who were also on a trip to the World Cup. Phil and I heard more about them from a young Portuguese lady one boozy evening in Ouagadougou. A week later in Abidjan, at a visit to the famous football academy of ASEC Mimosas, they came up once again. It seems inevitable that our paths would cross.

“Are you from Portugal?” I ask. “Yes,” comes the response. “Are you going to the World Cup?”, “Yes” again. “Roger Milla is not in Yaounde,” I say. A knowing look — You must be from Spirit of Football.” It turns out that we know about them and they know about The Ball. And, what’s more, there are three French guys on another journey to the World Cup who are also in town. It’s going to be a World Cup trip dinner tonight.

The Portuguese journey started in Lisbon on the 9th of January. They have been on the road the longest. We kicked-off our journey on January 24th in London. And the French trip, which is sponsored by TV Channel Voyager (France’s answer to the Discovery Channel) began on the 6th of February in Paris.

The Portuguese are die-hard Benfica fans. I take great pleasure in taunting them about Liverpool (my team) having knocked Benfica out of the Europe League a few weeks ago. They talk about their emotional goodbye from friends and loved ones in Lisbon — it sounded dramatic. The final goodbye from hysteric, wailing mothers expecting never to see their children again — Africa would be the end of them, they thought.

The French duo’s farewell was not quite as emotional. They are an interesting pair. One of them is a football fan. The other hates football but loves Africa. Their story is one of anti-football and pro-football contrasted against an African backdrop. “Are you falling in love with football” I ask the non believer. “Not really” comes the reply, “but I can understand it more.” “Are you falling in love with Africa” I ask the other, “Yes,” the emphatic answer. The love of Africa and of travel and mostly of football is what brings us all together. Sharing common themes through very different experiences. 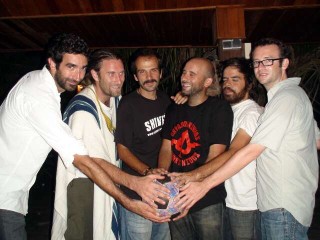 Separate teams but a common goal

We talk about life on the road in Africa, the ups and downs, the near misses, the pressures of reporting the journey. We go our separate ways, but not before making optimistic plans to meet up again with the Portuguese in Zambia, the French in Namibia and the Portuguese again in Johannesburg on the eve of the Opening Ceremony.

All roads here lead to the World Cup.

This post is filed under Cameroon, The Ball, The Journey and tagged with Cameroon, Douala, Travel, World Cup. You can follow any responses to this post through the RSS 2.0 feed. You can leave a response, or trackback from your own site.