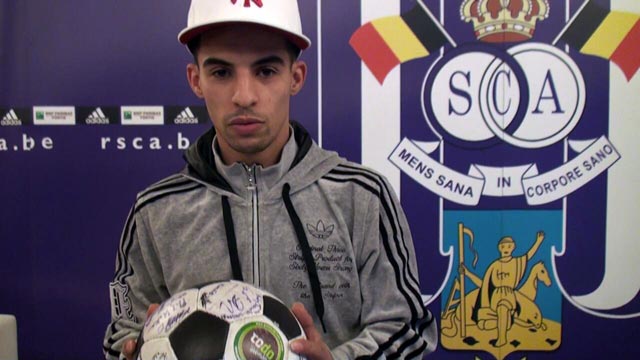 The Ball at Anderlecht 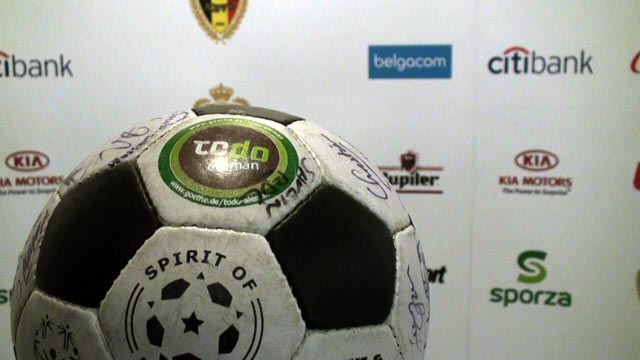 The Ball at the Belgian FA

The Golf Ball made quick work of the journey from Brugge to Brussels and before we knew it we were meeting with the Belgian FA’s press spokesperson and finding out about Belgium’s colonial football links to Africa, the importance of African footballers in Belgium football and the Belgium and Holland’s joint World Cup bids for 2018 and 2022. 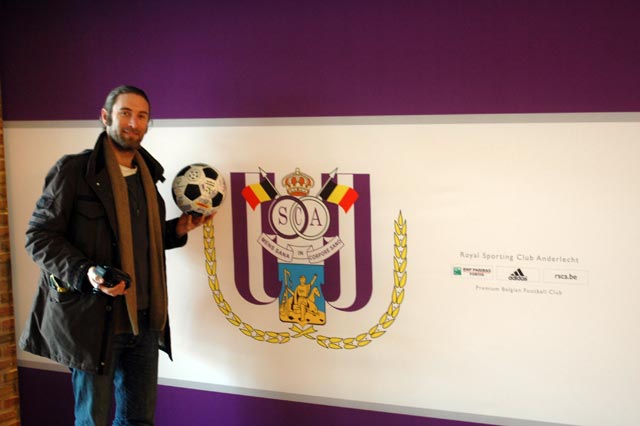 Andrew with The Ball at Anderlecht

Next stop was the working class suburb of Anderlecht and a visit to Royal Sports Club Anderlecht, Belgium’s most successful football club. We were fortunate enough to be granted an audience with the Anderlecht head coach, Ariel Jacobs, who gave us a wonderful insight into the Belgian football scene. 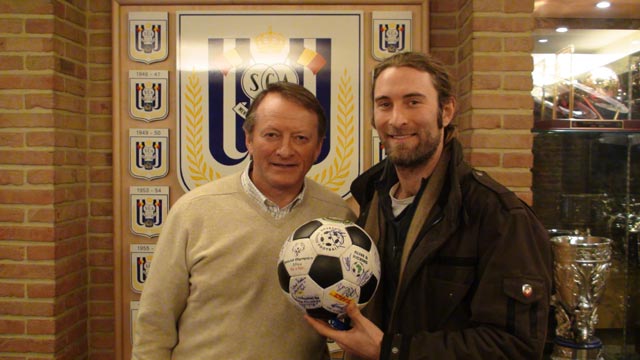 Andrew and The Ball with Ariel Jacobs

We found out about a 16-year-old local lad Romelu Lukaku, of Congolese descent, who is suddenly the biggest talent in Belgian football and wanted by top clubs across Europe (Chelsea, Arsenal, Real Madrid for example). The club makes sure he stays in school — they drive him to school every morning, pick him up every afternoon and offer private lessons to cover for any classes missed due to training or away game travel. The lad has his feet on the ground, has his friends around him and is kept away from some of the dangers that top young players across Europe face.

The Ball, in an exclusive interview, told us that it would like to see other big clubs following this youth policy. The Ball hopes to speak to the EU about this upon its return from South Africa in July.

During a quiet moment, we were shown into the stadium itself by brand manager Bert Van Der Auwera, where we had a kickabout on Anderlecht’s hallowed turf with none other than Mbark Boussoufa, the Moroccan international star.

RSC Andelecht works on several innovative youth projects with the EU, including the Double Club initiative whereby youths from Belgium go to a school in London connected to Arsenal FC to learn a specifically designed football English language programme and vice-versa. The Ball thinks that football can be a hook for youngsters to learn other languages and about other cultures and people.

For this enlightened view of how to conduct the business of football — and also because of the unexpectedly warm welcome we received — both Sven and I became fans of Anderlecht.

Categories: Belgium, The Ball, The Journey