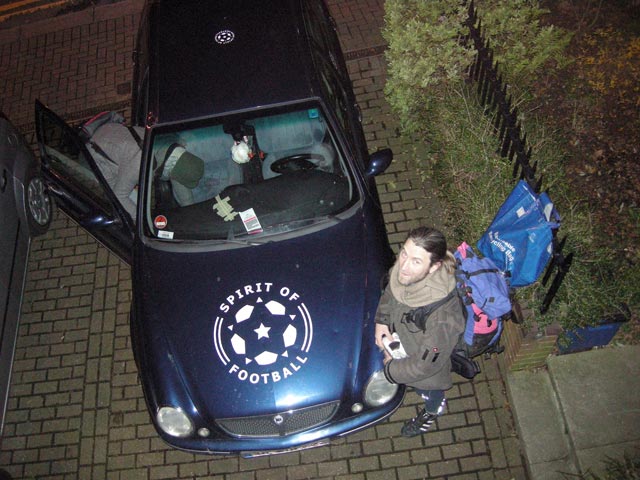 The Ball and The Golf Ball

The Ball’s transport on the first leg of its journey to South Africa is Sven’s Lancia, affectionately called “The Golf Ball” on account of the deep pock-marks left in its bodywork by a particularly severe hailstorm in Leipzig during the last World Cup. With its aerodynamic dents, it should get us quickly and slickly on our way.

After a great World Record attempt yesterday with Dan Magness The Ball’s packed it bags and is heading off to Europe on route to Africa. The featured track is from Kofi Sami “Any Trouble” find it and buy it on Amazon.

The Ball told us in Dover that it wanted to swim to France and we planned to meet it on the beaches of Dunkirk. We originally planned to stay in Dunkirk, but every bed in town was taken by a conference, so we were forced to rethink our plans. A storm was driving in from the Atlantic, rain pelting down, as we pulled up beachfront in The Golf Ball around 7pm with the hood up. We couldn’t see The Ball anywhere, but suddenly — out of nowhere — it bounced straight out of the water and right into the car, soaking wet… boy were we surprised… but we soon dried it off, warmed it up and set off for Brugge.

That evening I snuggled up with The Ball on the top bunk in our room in Charlie’s hostel in central Brugge. Sven had an uneasy night’s sleep on the bottom bunk, somewhat worried about a strange old man from Oostend. We missed our alarm and woke up knowing we had to get to Brussels in a hurry.

After a long journey from London all the way to Dover then across the channel to Calais, Sven and Andrew seem a little worse for wear as they digest the fact that no hotels are available in Calais. Today is also the first EP featuring “Learning English with The Ball.”

As we left Brugge this morning, I was reminded of a brilliant day I’d had in the same city 10 years earlier. That day I witnessed the master — Zinedine Zidane. His outstanding display took France through to the semi-finals of EURO 2000 and eventually to the championship. It was an honour to see him perform live. Olé, Olé Olé Olé! Zidane, Zidane! His amazing first touch and perfect balance make him one of the greatest to have ever played the beautiful game.

Categories: The Ball, The Journey