Well I woke up this morning,
To catch a bullet to the game…

Shooting ourselves in the foot(ball)

But the waking wasn’t worth it,
Coz the football match was lame…

Sixty quid each invested in two return tickets to Shizuoka – no hope of getting in to the game, but high hopes of hooking up with other fans and watching the game on a big screen nearby, which is the next best thing to being inside the stadium… 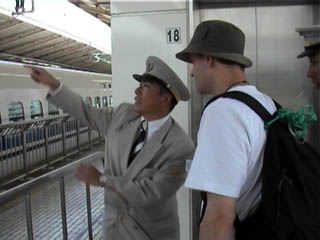 We anticipated the bullet train whisking us to Shizuoka at lightning speed, but first had to find the right one – a more tricky task than I thought… no-one spoke English, but the usual mixture of gesture and smiles prevailed in the end. 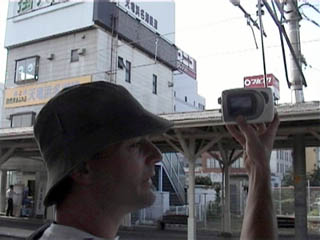 The game already in progress

Arrival at interchange to the local train found us talking to other England fans, some of whom had tickets, others, like us, here for the atmosphere. The bullet train had been slower than we first thought, and a quick look at the station clock revealed that the game was to start in five minutes. Some kindly Japanese folk lent us their portable TVs so that we didn’t miss a moment. 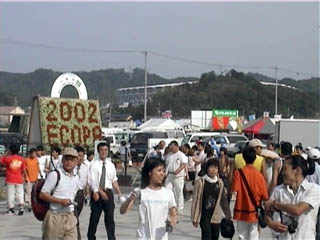 As close as we got to the stadium

Yes, indeed. Unbelievable as it was to us, the stadium was utterly unapproachable, and there seemed to be no sign of a big screen for the crowds of Brazilians, English and Japanese in England or Brazil disguise. A hundred Beckhams with nowhere to go… except round and round the windswept merchandising plaza. Buy a ticket, buy the shirt, buy the flag and commemorative keyring… and then piss off out of here. 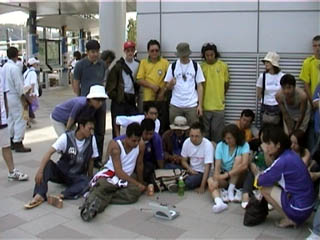 As good as it got… 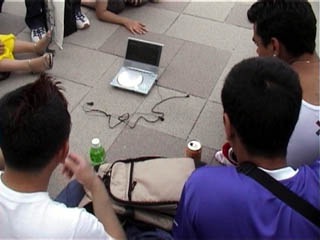 …in the way of big screen action.

Fortunately for us, a Japanese lad had brought along his portable DVD player, and we crowded round the tiny, flickering screen in the shadow of the train station – until even this small crumb of interaction with the nearby events was also taken from us – the police deeming our little gathering to be a nuisance, and moving DVD lad along. 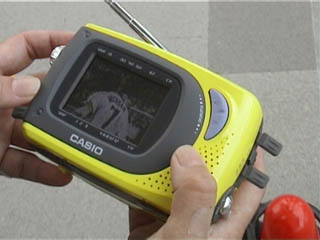 Luckily, a wizened old Japanese woman with a portable TV was nearby, taking no orders from the megaphone-wielding police. She stood stubbornly behind their barriers, watching the final moments of the game… turning the screen towards me so I could see the spectacle come to a close in the stadium. Final whistle, and back to Tokyo as fast as is possible… 50,000 fans wanting to get out of there, and not even an extra train laid on.

Back in town, I decided to go watch the Germany v. USA game in an English pub. Nowhere else seemed to be showing the game, and I’m instantly fleeced for six quid a pint. Miserably, I find a corner of the bar to stand and forget myself in the game in progress. As the second half begins, Phil walks in, just arrived from Shizuoka. 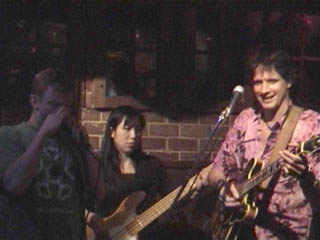 After the game finished, Phil and his harmonica joined the band on stage to play the blues… an ironic, but perfectly matched accompaniment to a bluer-than-blue day.

After England’s defeat at the hands (or feet) of Brazil, Phil plays the blues back in Tokyo.

(with apologies to Mr. Morrison)