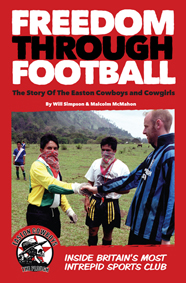 Bristol-based, independent publishers Tangent Books is offering all Spirit of Football followers a 30 per cent discount when you buy the amazing, brand new book, Freedom Through Football: The Story of the Easton Cowboys and Cowgirls. Just click link, add the book to your cart and enter the code sof at the checkout to get the book, delivered free, for just £6.99 instead of the rrp of £9.99.

Authors Will Simpson and Malcolm McMahon have painstakingly researched the first 20 years of the history of the Easton Cowboys and Cowgirls – an outfit that can without any doubt claim to be ‘Britain’s Most Intrepid Sports Club’. The book has over 200 pages, and two colour sections of photographs of the Cowboys on their tours.

Formed out of a kick-about between a group of punks and kids in Bristol, England, the Cowboys are celebrating their 20th anniversary in 2012. During that time they have played football against the Zapatista Freedom Fighters in Mexico, sent a cricket team to Compton in Los Angeles, organised the Alternative World Cup, played football in Palestine and much more.

A young street artist called Banksy joined the Cowboys on their trip to play against the Zapatistas and the book contains never before published pictures of Banksy at work in Mexico.

“Just finished reading the book and want to say a massive well done to Will and Malc… (And yes maybe I did well up slightly at the end) BUY ONE!” – Dom

“I started reading it today and I know it’ll be very good company on the train to and from work this week. In fact I already need a few more copies for friends over here” – Nico

“I finished reading the book last night, it was a cracking read and had some laugh out loud moments. it also made me reminisce of the good times I had with the cowboys in the mid 90s early noughties!!” – Nick G

“Best ‘sports’ book ever! Don’t be put off by the title, for this book is about much, much more than football (which, incidentally, is now just one of three sports currently played by the various club teams). The Cowfolk, as they are collectively known, are a community-based sports and social club from the heart of inner-city Bristol, who have helped redefine what’s possible when you get a group of amateur sportspeople, professional drunks, activists, misfits and ne’er-do-wells (alongside a few ordinary, decent, everyday folk) together.

The book charts the first 20 years of the club’s history from 1992 to the present day, warts and all. There are tales of dodging army check points in Chiapas during a visit to play teams in the Zapatista communities, taking part in cricket matches in Compton LA against ex-gangsters, heading to the West Bank and literally leaving their mark on the Israeli apartheid wall, and organising Alternative World Cups attended by people from as close as Bedminster to as far away as São Paulo (via Lithuania and the South African township of Diepkloof). There have been a few sad losses during the journey (and quite a few happy additions too), the occasional harsh word, partings of ways, fallouts, fall-ins, love affairs, babies and hangovers. But mostly, it’s about being a part of something that exemplifies everything that is good in human nature.

The book is 229 pages, nicely supplemented with plenty of images (many previously unseen) and extra info, with an additional 32 pages of colour pics (including a couple of that Banksy fellow hanging out with the Cowfolk in Chiapas and doing some rare hand-painted pieces in the villages).”

Don’t miss this chance to immerse yourself in Freedom Through Football at a discount — just use your sof code at the checkout.