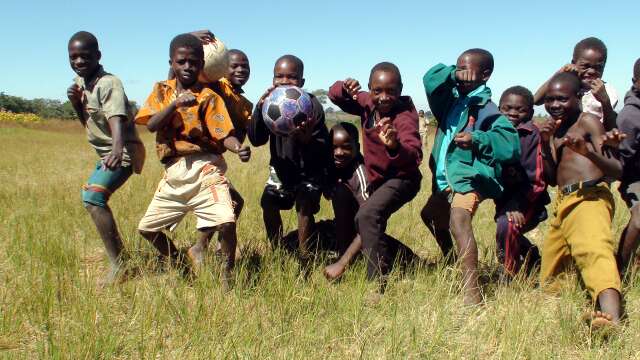 “Look over there”, says Kirstin, ” do you want to stop?”. “Na Klar (yes, of course)” we say in unison as we spot children running around a field kicking a football. It’s time for The Ball to work its magic.

It’s a national holiday in Malawi and we are on our way to Blantyre. We’ve followed Kirstin’s suggestion and taken the scenic route. Its been a fabulous decision thus far as the scenery is nothing short of spectacular. Our mission is to make it to Blantyre by early evening and to take our time today, hoping for random football encounters en route. This is the first encounter of the day.

We pile out of the car and boot The Ball into the field. The children go bananas. They kick and chase The Ball across the field. As we talk to the kids, we get the feeling that something is out of the ordinary here. Something is different. They are more shy than the children we’ve encountered in Malawi thus far and they appear not to understand English.

But for now there is an international language in use and Christian is bending fantastic balls into the box for the kids to scramble into the goal. Andrew see’s Kirstin waving frantically from the other end of the field. He runs over to her.

“We are in Mozambique” she says. 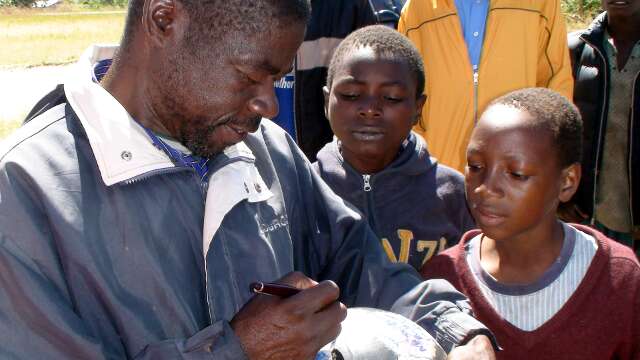 The first signature in Mozambique

The people who live either side of this road (some in Malawi, others in Mozambique) share a common language, common customs, geography and history and are indeed members of the same tribe — the Chichewa. But they live in different countries.

With The Ball at our feet and British passports in our hands, it’s been relatively easy for us to cross these European-defined “African” borders but we’ve always needed a visa stamp. Not this time. We have accidentally stumbled into country number 26. Visa, what visa?