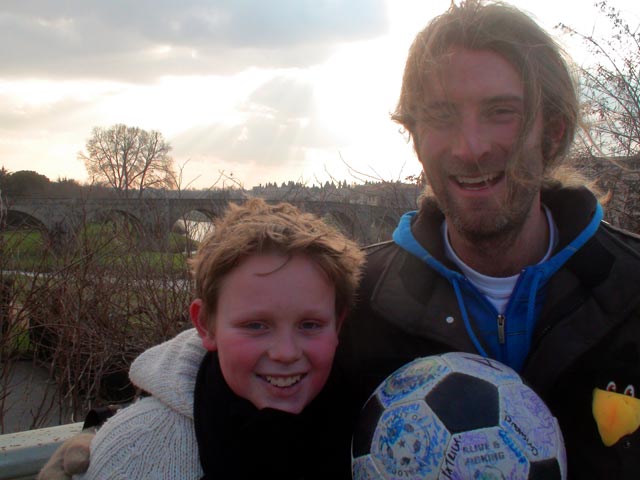 “Jack is mad about football” said Chris Lunch, “he’s definitely up for something with The Ball. His football team are expecting you.” He certainly is mad about football, and very well versed in it. Last minute change of plan: coach ill and freezing cold outside- training had been cancelled. Instead, we were off to Carcassonne, 12 year old Jack on board, directing the way into the historic old town and philosophising about football.

Jack with Andrew in Carcassonne

An Irish mother, and an English father, living in the South West of France with with his Portuguese stepdad, he’s deeply religious: “Manchester United is my religion” he said at breakfast. He watches a lot of football with Paulo, an FC Porto fan who idolises one touch football and the beautiful game. Paulo has Portuguese cable tv — no problem for multi-lingual Jack to understand and anyway, football is a universal language. Jack wears a t-shirt emblazoned with the words: This is an authentic Christiano Ronaldo signature. It is. Paulo organised that.

But who is he going to support at the World Cup? France is out of the question after Thierry Henry’s handball nearly brought his mother to tears. Mother Una: “That was disgusting”, Henry will never be forgiven in Ireland. Jack likes Spain and Brazil but he’s probably going with England, mum is not exactly over the moon about that one either.

Posted in France, The Ball, The Journey | No Comments » 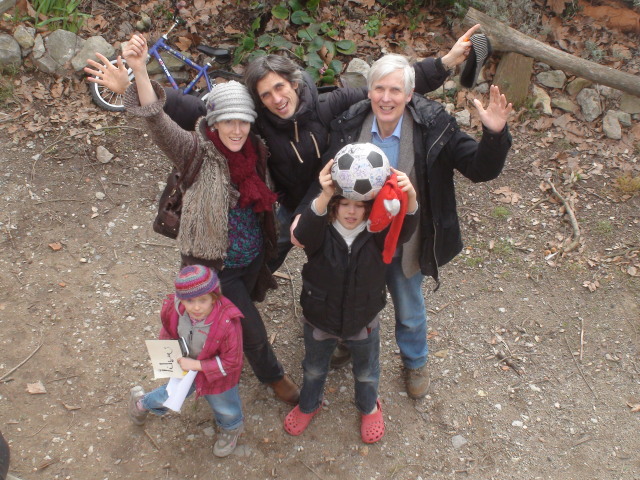 What comes to mind when you think of the South West of France? I think of summer heat and a nice glass of red wine.

This morning we awoke late in Montlaur after sleeping through the alarm. I opened my eyes, struggled out of bed, pulled the curtains and… white, a blizzard had engulfed us during the night. Freezing cold and minus four combined with driving wind. Bed looked much more inviting. 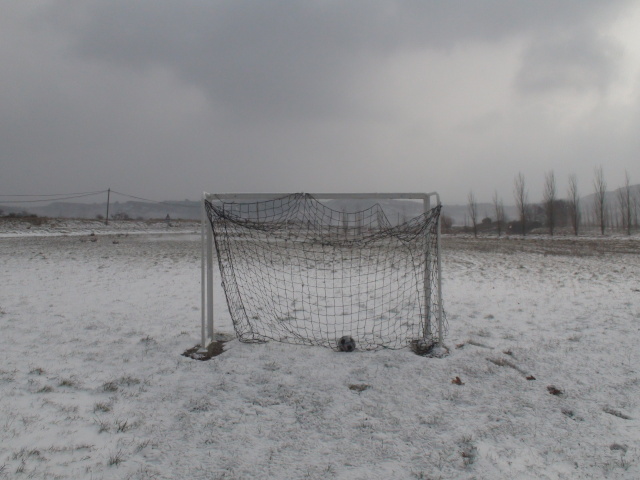 But good news wasn’t far away — a welcome reception at FC Barcelona awaits us this afternoon. “We’ve won again,” said Christian. Downstairs, Una, our fantastic host, had prepared breakfast. The table was set, the smell of freshly brewed coffee wafted through the air. We’ve won again, I thought.

A few days of intenet access, a few good nights rest and time spent with great people: what more could one ask for. Chris & Maddy, Una & Paulo, Jack & Caitlin, thanks so much for your wonderful hospitality for letting us into your homes and treating us like kings. We most certainly owe you our sincerest thanks and your signatures on The Ball are a testament to the spirit of the project. Thanks. 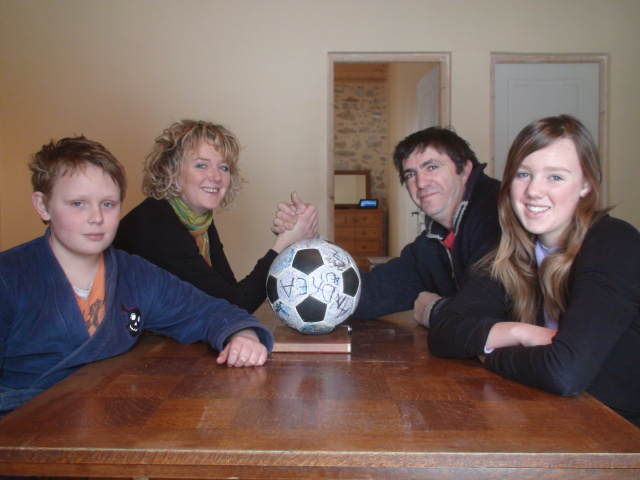 The Ball’s hosts in Montlaur

If you’re planning to stay in the Carcassonne area, you can stay at Una’s on a bed & breakfast basis – we can’t recommend it highly enough! Email her to book your stay. 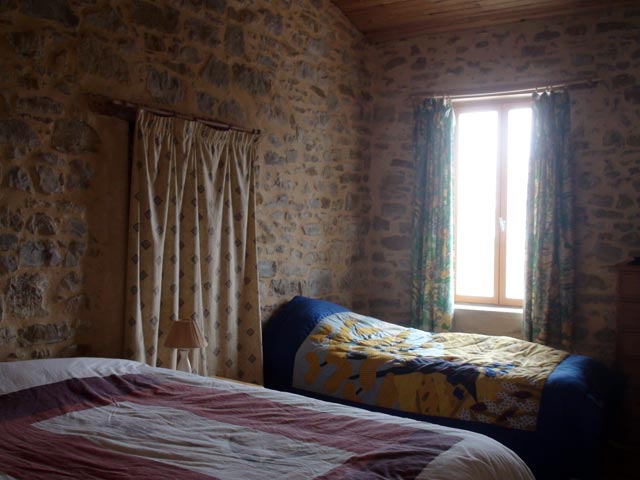 Our thanks also go to the Lunch family for making our stay in the Carcassonne region possible.

The Lunch family help The Ball on its way

Tags: B&B, Carcassonne
Posted in France, The Ball, The Journey | No Comments » 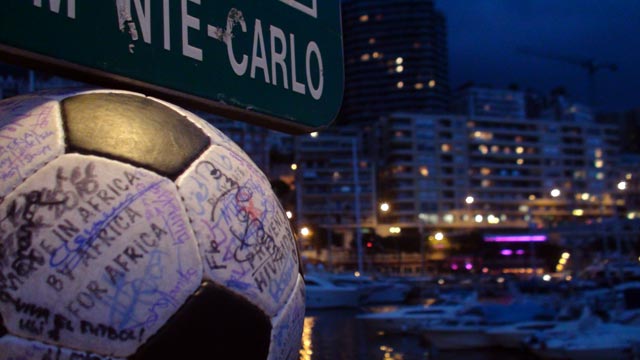 The Ball is an ambassador

On the road again as the sun was going down in late afternoon we followed the coast into France. What a gorgeous drive.

“Shouldn’t we stop off in Monaco? It is another country, isn’t it?” said Christian. Depends who you talk to. In we went. An idea was born, maybe The Ball might be given a bed for the night in a luxury hotel. Monaco is a magnet for the wealth of Europe. In Africa one is more likely to find “poverty management”. In Monaco, there was plenty of advertising for “wealth management”. And wealth was on display everywhere we looked: luxury yachts, luxury cars, luxury stores and luxurious people with luxurious pets. And there we were with the most valuable asset around… The Ball, soon to cross the entire African continent.

The Ball in Monaco

Would the folk of Monaco realise the wealth of The Ball? Would it be welcome? We tried our luck at one of the top hotels, looking over the marina. “Can The Ball stay here?” I asked. “No. Monaco is too special” came the reply. “The Ball is very special too” we replied, and left.

Our plan wasn’t going to cut it on Monaco. But life is what happens when you don’t make plans. And we were having a lot of fun with The Ball. The Ball went to the casino — came rolling out empty-handed but high-spirited. Next up, the top hotel in town, the Hermitage. A friendly welcome. The Ball got a stamp from the concierge. An employee of the hotel was a former Monaco player. The concierge contacted him and told us he’d meet us outside the front of the hotel in 30 minutes. Brilliant. 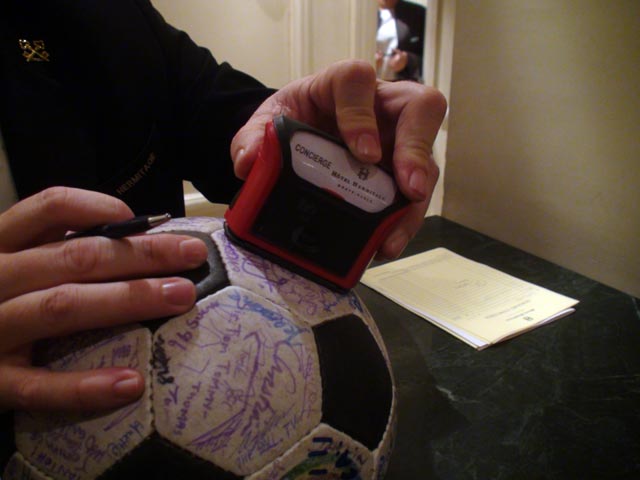 The Ball gets stamped at The Hermitage

We decided to have a keepy-uppy session on the manicured lawn outside the lavish entrance to the hotel as we waited. We passed The Ball to passers by — high-heeled back heels, shiny-shoed toe-pokes returned it. The Ball got some first class treatment. Then a friendly looking fellow with a cigar in his mouth controlled The Ball. He wasn’t from around those parts. Turns out he wasn’t just anyone. An Iraqi Ambassador, Saddam’s Minister for Protocol, a famous author with an award-winning film made from of his award-winning book “In the Shadow of Saddam”. 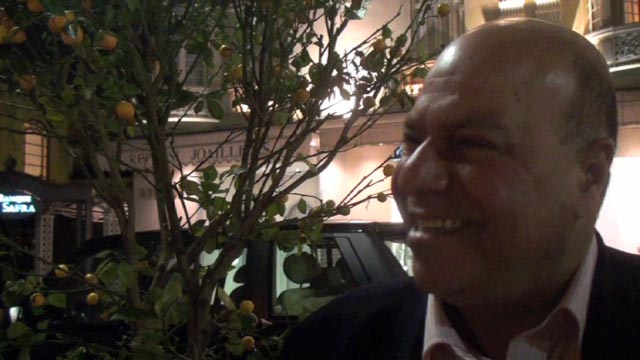 “I wish you all the best in your effort. I fought against dictatorship all my life. I and a football team of my tribe were imprisoned in the time of Saddam Hussein because we refused to play on behalf of his criminal son Uday.”

We were stunned by what was unfolding.

“His son was the chairman of the Iraqi Committee of Football,” he continued. “I used to have a team of football with our tribe and he ordered us play with a team of his and we refused — and put us in prison and he tortured us. Yes. So as you can see these people are far away from the value of sport.”

“Sport is peace. Sport is love. Sport is humanity. And what you are doing now, you are missionaries or ambassadors of peace because sport is really a way to unite nations and this man wanted sport to be a way to divide the Iraqi nation. If you come to Iraq, we will protect you with our hearts and with our life.”

“You are ambassadors of peace and football. It is a very honourable mission.”

With our hearts held high we headed onward to Carcassonne.