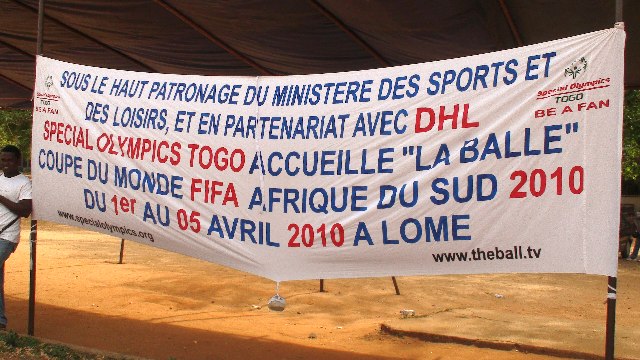 Key to the City of Lomé for the Spirit of Football

Andrew and The Ball are taken to Hotel de Ville (City Hall) where Andrew tells the Mayor of Lomé that he, like anyone else, may sign The Ball but that there is a condition: he must head it or kick it first. The Mayor replies: “I have a head and I have a foot” and proceeds to head and kick The Ball before signing it.

And with no further prompting, save Andrew’s proud smiles, The Mayor continued:

“It is a pleasure and an honour to welcome you and your organisation Spirit of Football to Lomé and to receive The Ball of the World Cup in Lomé. I am honoured that you have chosen the city of Lomé and Togo on your route. The day you have arrived in Togo coincides with a day after the election and just before Easter, it is very good timing as we are also celebrating the 50th anniversary of Togolese independence. I am wishing you well and I hope that you feel at home in Africa. This ball that has been made in Africa, by Africa and for Africa is an honour for Africa and I wish that an African team will be world champion. But as they say — let the best team win. I wish you a welcome to Togo and as the Mayor of Lomé I am symbolically giving you the key to the city of Lomé so that you can open all doors here.”
— Mayor of Lomé

Categories: The Ball, The Journey, Togo