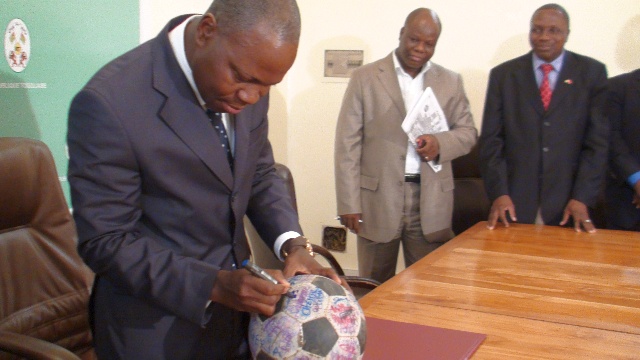 Meeting the Prime Minister of Togo

The next stop for The Ball is a private reception with the Prime Minister at his residence.

“Let me make it clear. This meeting was not planned but I had to make myself available for this because our government gives high importance to sports. It is not only the government but all of the Togolese people. And the government of Togo has an obligation to the well being of intellectually disabled people and to providing social welfare of those people. In 2008 the government set up a fund to support the welfare of mentally challenged people. I would like to thank Spirit of Football, Special Olympics and all partners of The Ball for coming to Togo. We are delighted that you chose Togo as a point of destination on your noble journey to South Africa. The government will try and do everything in its powers to make sure that sport is supported in Togo. I would like to encourage you in what you are doing. It is a noble cause. Thank you for coming to Togo and I wish you well in your continued journey.”
— Prime Minister of Togo, Gilbert Houngbo

“The spirit of football to me is very simple. It is to bring all of the world together in serving as a base for peace but also for development in reducing inequalities in our world.”
— Dovi Amewome, Director of Special Olympics Togo

“Let The Ball roll free through the streets of Lomé, let it bounce freely along Lomé’s beautiful beaches and be allowed to be kicked and signed by all citizens of Lomé.”
— Mr. Issa Amenuyan, Chairperson of Special Olympics Togo

Categories: The Ball, The Journey, Togo