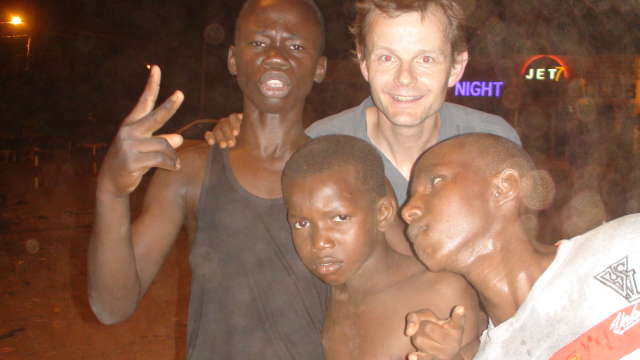 It has been a long day of meetings with dignitaries. We haven’t eaten all day and ready for some food and then sleep.

We get out of Kasim’s car. Phil and Kasim head for the restaurant to order dinner. Lagging behind with The Ball, Andrew sees two children on the intersection of two dusty little dirt roads. One child comes to ask for money, holding out an empty paint tin. Andrew reluctantly shakes his head. “Non”, he says. Instead, he kicks The Ball to little lad. The boy’s eyes light up. The three of them pass The Ball back and forth, inviting two more boys to join in. Soon there are ten or more kids with him, juggling with The Ball in a giant circle. 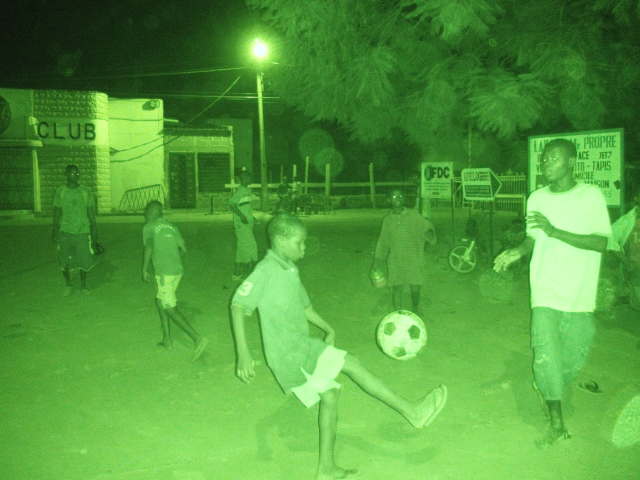 Night shot of keepie-uppie in the street

Phil and Kasim have joined them now, and there seems to be talk of a game. Indeed, goals are being marked by large jagged stones. The dangerous ditches on either side of the road define the touchlines. The child who was begging for money offers Kasim his paint tin begging bowl. Kasim, duly appointed as referee, takes it — hitting it with a stick will do perfectly for a whistle. Game on. Skins against shirts.

Andrew considers himself lucky to be a shirt. However, his DEET-impregnated, anti-malaria shirt and trousers feel much too warm. It is 9pm and 30 degrees outside. He’s sweating and coughing up a storm in this little dust-bowl of a pitch. Phil takes his place — and the goals start flowing. Shirts win 3-1.

Phil poses with some of the players

This kind of playful interaction makes The Ball’s journey such a magical experience for us — it reminds us of the power that lies at the heart of the beautiful game. And for the little boy with the empty paint tin? Although we can only guess how he feels, perhaps his tin contains something more precious than money — memories of a ball which are his to keep forever.