Hello everyone from Rob – the infamous Battersea Park football fouler.

Chris adds: here’s an action replay, as if you needed reminding ;-) 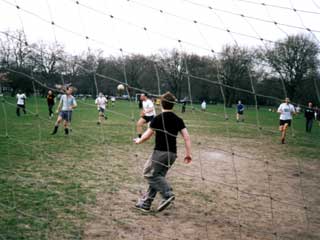 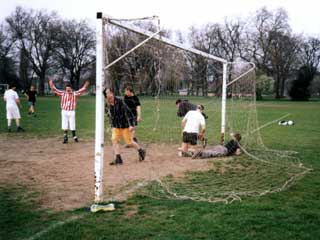 I’m currently packing my bags to join Phil and Chris in Xiahe, near Lanzhou. I’ve already had my first taste of Chinese officialdom facing the stern woman behind the glass at the Chinese Embassy in London last Thursday morning. She grabbed my forms without a word and refused to answer any of my questions about bits of the visa application form I couldn’t complete. As I left the embassy to wait two hours for them to express process my application, I met three travellers on the steps who had been refused a visa, despite having submitted airline tickets, full itinery and contacts in China. I hadn’t submitted any of this information; I hadn’t even bought a flight yet, so I wasn’t very hopeful.

…within minutes my passport was returned to me with the green visa sticker adorning its pages and I was walking elated along Regent’s Street.

I texted Chris the news from my mobile and as I stood looking out over the busy midday traffic of Oxford Circus, I received his reply saying that they were in the middle of the desert, not a building in sight, on their way to Turpan along the Southern Spice Route. Suddenly the crowds around me seemed very far away.