Life and death at Kashgar market 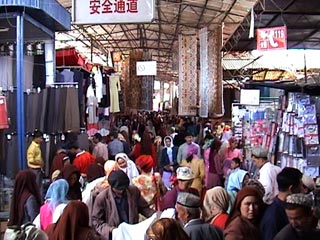 Chris and Phil put on a show at the legendary Sunday market.

Our goal in Kashgar was to visit the fabled Sunday market where local life gathers to meet, exchange, barter and haggle. People make long journeys from the outlying regions to attend the market, which echoes with the trading cries of Tajiks, Kyrgyz and Uyghurs. 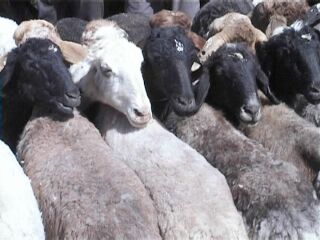 Sheep waiting for their future to be decided

And as is the habit in Asia… where there is life in abundance, death is never too far away either. 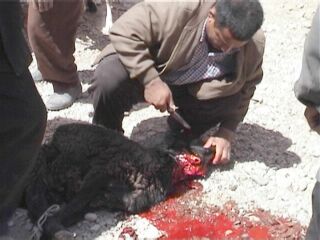 Killing a sheep with a blunt penknife

At the livestock market, life and death are intertwined. The animals are traded and killed on the spot, with people rarely batting an eyelid at the means of dispatch. To my sheltered western sensibilities (even though they are tempered with years of travel in Asia) this open acknowledgement of the inseparability of life and death still comes as a shock once in a while. 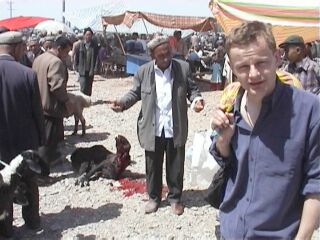 I watched this creature meet its maker with eyes transfixed by the inadequacy of the killer to do his job. For quite a while, the animal flailed around, its head barely attached to its body, and blood pouring from the gaping wound. A crowd gathered around the spectacle, obviously sensing that a sale would have to ensue. 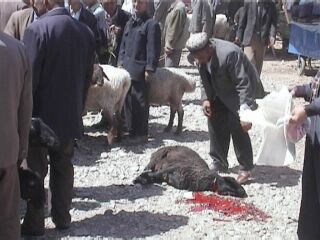 Eventually, the sheep gave up the fight to live, and with a last thrash of its head, flopped into the stillness of death. The crowd dispersed – a sale presumably having been made – and we too wandered onwards, only to be reminded around the corner of the final destination of the sheep’s carcass.

The most common food in Kashgar is ‘laghman’ – noodles with lamb and vegetables. Or rather mutton and vegetables, as it is only the fully grown animal that is killed here. The noodles are prepared by hand (as the following movie clip shows) with great skill, the dough being spun and twisted like a skipping rope in a continuous entrancing rhythm.

To see the beginning and the end of the production process, and be vividly reminded of the origins of the food that sat on my plate brought me some comfort… at least I felt connected to what I was eating, in a way that is all too rare in England. A brutal business it may be, but it is an honest one too.

And life goes on too… within minutes of finishing our meal, Phil got the Ball out, and started to play keep-up with a local boy in a Zidane t-shirt. He surprised both of us with his control and solid skills, playing confidently on the rough, rock-strewn surface. 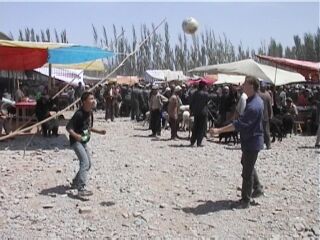 As we played with the steadily growing crowd of local youth, Luke and Claudia – two travellers we had met on the train from Urumqi – turned up with their guide Abdulwali (who was to become a big feature of our Xinjiang experience) and together we started to try and organise a game for the evening. 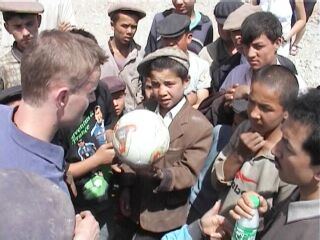 Abdulwali translated our plans to the Uyghur children, and asked them to relay the news to their friends as well. We were hoping for a good turnout for the game that evening, but also realised that we had little time to plan for it. 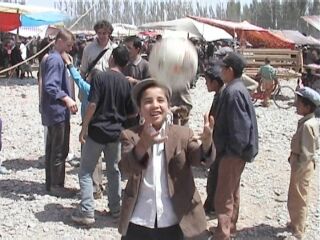 Nevertheless, getting the word out is stage one in any enterprise, and this was a good start. We looked forward to the evening and the big game…

Written by Christian Wach on Monday, May 6th, 2002