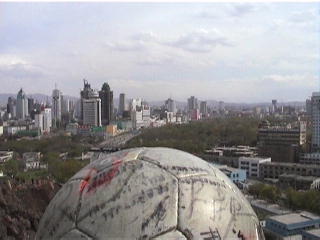 The Ball arrives in China!

This was going to be a posting about some of our experiences in Almaty, but I’ve decided to skip writing about that for several reasons…

First is that internet cafes here in China have no floppy drives. This may not sound particularly problematic, but I spent a long time in Almaty getting pictures off the cameras and editing them. As I didn’t have time to upload them, I saved them to floppy thinking that I would do so when I got to Urumqi. No such luck.

Secondly, we unfortunately arrived in Almaty on a weekend when the local team were playing away – so there was no football to watch, and since no-one seemed to be playing football in the streets, we were left with little option but to call Almaty our “Half Time” pause. Still waiting for our team talk, though ;-)

A quick look at the biggest stadium in Almaty, Kazakhstan.

Thirdly, we had another bundle of bureauracy to contend with, not the least of which was to find someone who could translate our trip description into Chinese. We did find someone eventually, but they could only translate from Russian. Ah well, better than no translation at all, I guess. So, here it is, our Chinese trip description 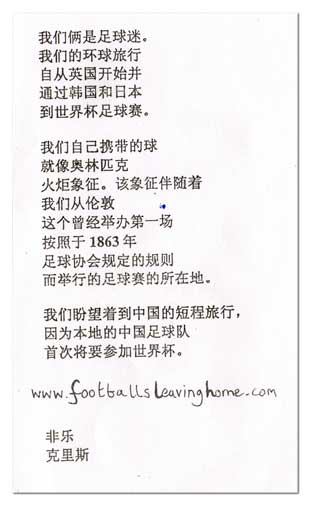 The Almaty-Urumqi train ride is notorious (at least in the guide books I’ve read) for the sensitivity of the border crossing. Having travelled painlessly through other notorious regions previously, we were relatively unconcerned about the rumours, thinking that the stories were probably just that – rumours.

After finding ourselves on the cleanest, best equipped train I have yet been on, we arrived in some style at the Kazakh-Chinese border, where our passports were collected for inspection. Tim (our fellow World Cup traveller) had emailed us the previous day saying that he had arrived in Urumqi, and that the journey, while long, had been easy… interrupted only by an eight hour wait at the border, during which the train sat in sidings with the toilet locked. Mindful of his advice, we made good use of the facilities before the train ground to its inevitable halt.

Changing the undercarriage of the train as we go from Kazakh to Chinese gauge. 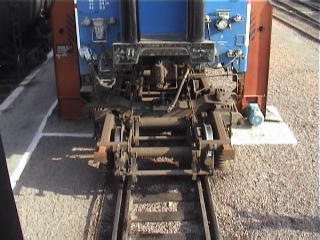 The train get new wheels

We cross the halfway line despite an attempted professional foul.

The wait was mainly due to what Phil referred to as a trainspotter’s wet dream – the entire undercarriage was changed from Kazakh gauge to Chinese – each carriage lifted up into the air to replace the bogies while we sat inside watching. The delay was amusingly punctuated by me getting locked out of the train until Phil found an open door on the other side, and then by Phil finding himself on the roof of the train as it pulled out of the sidings and made its way back to the main line. Thankfully, the train came to rest again very shortly, and Phil was able to hop back on with nothing but a few tut-tuts from our carriage guard. 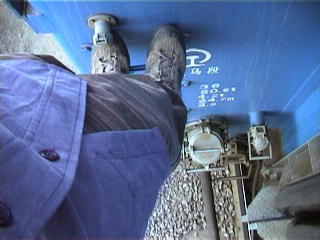 Relieved that Phil didn’t have to spend the next few hours gripping the ladder between the carriages, we toasted his bravado with a shot of vodka, and settled in for the next leg of the journey. Or so we thought… because as we arrived at the border, we experienced what was probably our most hair-raising moment of the trip to date.

First, a customs official came in to our compartment and requested forms which we didn’t have – customs entry forms. Since we had arrived by bus, these had never been offered or even available. We told him as much, and showed him our trusty Russian trip explanation, and he wandered off seemingly satisfied. But worse – far worse – was to come.

All of a sudden, green-uniformed border guards opened our door and started shouting something unintelligible at us, and gesturing that we should follow them. We gave them our best dumb-tourist blank looks, and sat tight, hoping they would simply go away. Which they did – for a while – only to return with a young conscript who spoke English.

“You must pack your belongings and leave the train,” he stated simply.

“Your visas are not in order,” came the reply.

What followed was a dialogue of rising tension consisting of us saying that our visas were perfectly in order, and the young lad and his superiors reiterating that they were not. As the problem seemed to revolve around the number of times we had entered the country, we showed them photocopies of our visas, and carefully explained our route. All to no avail.

“You must pack your belongings and leave the train,” came the response again, “it is an order.”

“But if we leave the train then we really are in trouble with our visas – they run out before the next train to China,” we protested.

“You must pack your belongings and leave the train, now!” To my horror, one guard made a handcuffs gesture to Phil, a look of genuine anger on his face. “Or you can go to China without your passports,” he continued, chillingly.

“No! We are not leaving the train!” Both Phil and I had by this time realised that if we did get off then we would be utterly at the mercy of the guards, and that either the train would leave without us, or we would leave without our belongings. “You bring the passports here and we show you that everything is in order,” we pleaded.

Our stubbornness seemed to pay off at this point, and the two of the four guards disappeared to get our passports, or so we hoped. They returned shortly with the head honcho of the border post, who came into our compartment and sat down next to us with our passports in his hand.

“Your visas are not valid,” the commandant said, showing us the stamps. “You have two exit stamps and only one entry stamp, and yours,” he said pointing at me, “is not signed.”

My heart sank, as I realised that he was in all likelihood right. I had never checked to see if there was a signature, nor even known that there should be one. He then showed us the stamps on our visas, and explained that there were little arrows on them which signified the direction of travel – into or out of the country. We both seemed to have picked up an exit stamp at the Kyrgyz border when we were in fact entering the country.

My mind drifted back to that empty office and the fearsome female border guard in the improbably high heels who had stamped our passports when we arrived. I could see how she had made the mistake… we had at first just wandered through the border to the Kazakh side without being stopped or questioned, and it was our bus driver who had run after us to haul us back to the customs post to get our stamps. When we entered the office, it would have looked as though we were coming from the Kazakh side, not the Kyrgyz.

“So how do we sort this problem out?” I asked, expecting – indeed hoping for – a reply that contained the words ‘dollar’ and ‘hundred’ or multiples thereof.

“You have to go to Almaty to sort it out,” he replied.

“Where are you going from China?” he then asked.

“Korea, and then Japan,” we replied in unison, sensing a lifeline was being thrown to us.

“And you are coming back through Kazakhstan?”

“No, we are flying back to London,” we said, stretching our arms out to mimic an aircraft.

“OK,” the commandant said after a pause which seemed like an eternity. “We will sort it out,” and he promptly left the compartment. Still with our passports. The younger guards looked at us with unconcealed malice, and backed out after him. We waited anxiously to see what would happen, and our faces lit up when a guard returned and threw us our passports, the arrows on the visas crudely amended in biro.

Never have I wanted a train to start moving more. Not just to get away from the scene we had just been through, not just because someone was taunting us from outside the carriage by throwing stones at our window and knocking loudly on the side of the carriage to get our attention, but because by this time my bladder was fit to bust. Phil, it seemed, must have felt the same way, because at the first welcome lurch of the carriage, he rushed out into the corridor and ended up first in the queue.

Thankfully, I was second, with the rest of the occupants of the carriage queuing up behind me – all of us getting increasingly desperate as the sound of running, er, water exacerbated our needs.

Ahhhh, China, you perhaps have no idea how close I came to hugging your smiling border guards… 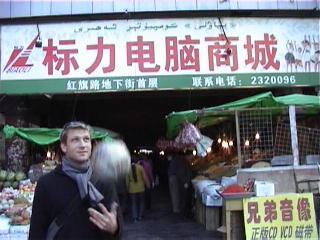 The sights and sounds of Urumqi as we look for The Boy Noble, who is worthy of his name.

Written by Christian Wach on Thursday, May 2nd, 2002