We got up at 6.30 this morning for a photo-shoot in Red Square for the Moscow Times (read the story here) – which went very well, apart from me having to pay a “fine” to a militia guy with 500 Roubles (kindly negotiated on our behalf by Martin, the photographer) to persuade him to give Phil his passport back -all for using a tripod to do a panorama of the square! 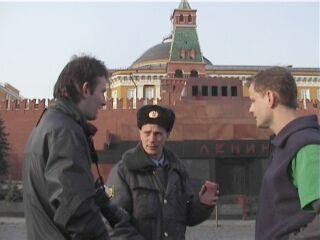 If you’re reading this, my Russian friend, I hope you like this photo of you with Phil.

A dodgy encounter with a dodgy official – we come very close to our first yellow card.