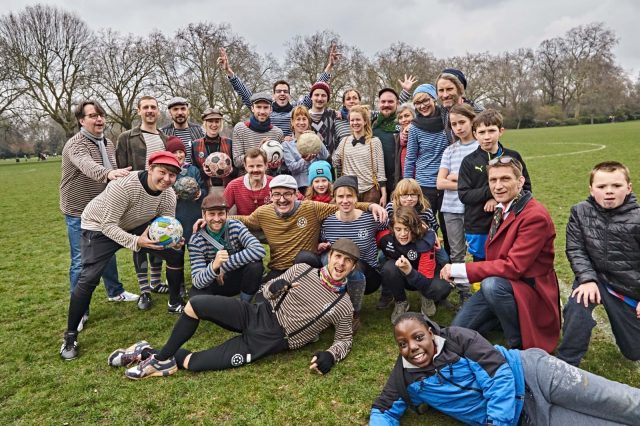 Immediately after the first signature, I was put in a box again and stashed away for three months on a shelf in the Spirit of Football office in Erfurt. And though it was a very special signature – Frank Walter Steinmeier’s, who happens to be the President of Germany – I was nonetheless rather disappointed, because I had heard that I would be going on a big trip through 15 countries and get to know loads of people. From my position on the shelf I could hear that great schemes were being made and it did seem as if I would play an important role in those, but when for goodness’ sake would it all start?! 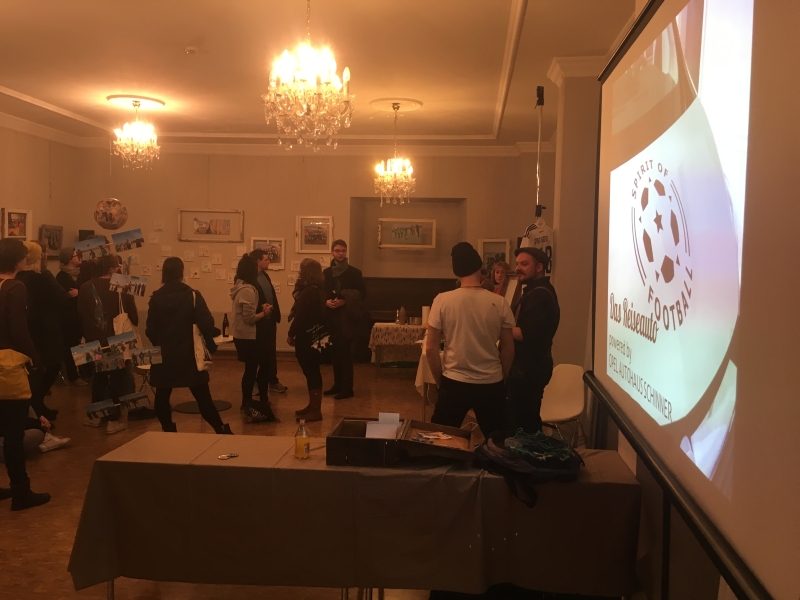 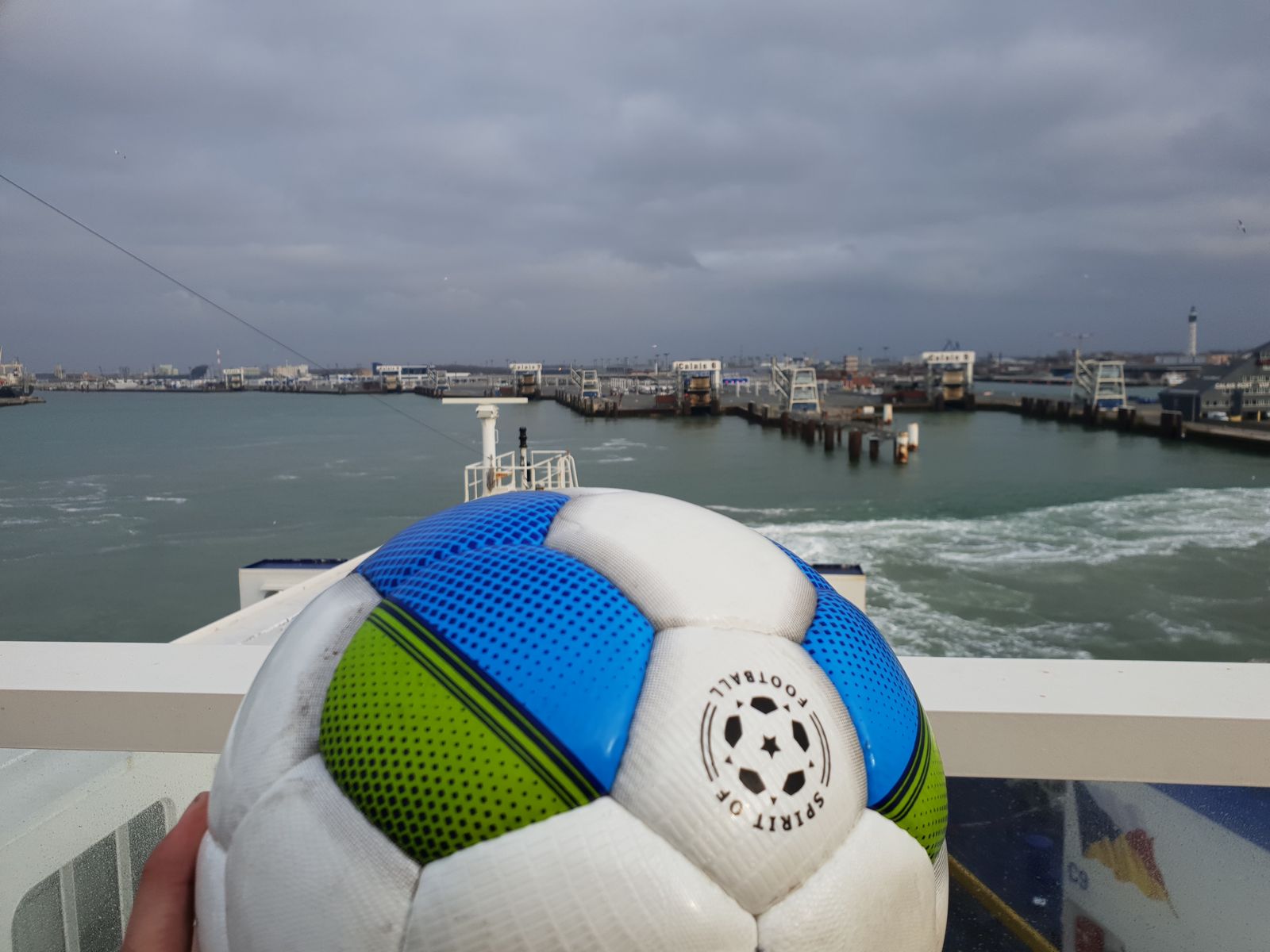 Well, on the official beginning of spring (which it wasn’t really, temperature-wise) I was finally taken out of that box and presented to a crowd of people celebrating the start of my journey. The party took place in a beautiful house in Erfurt city centre where Wilhelm von Humboldt and others in centuries past had introduced some international flair to Erfurt, so this was a fitting venue. Two days later, together with a group of five, I got in a van which had been decorated with my image and since so many others wanted to accompany me to the land of the origin of football, another dozen people took a train to London to meet me there. I found I had drawn the better lot and I relished the fresh sea air while crossing the Channel on the ferry. I even spied the White Cliffs of Dover from under Benni’s arm – wonderful! In London it became rather crowded. The hostel, The Horse & Stables in Central London, was full of strange people and smelled funny, but luckily the beautiful Dori was there to give me a warm hug so that I could peacefully fall asleep on that very first night of the long journey. 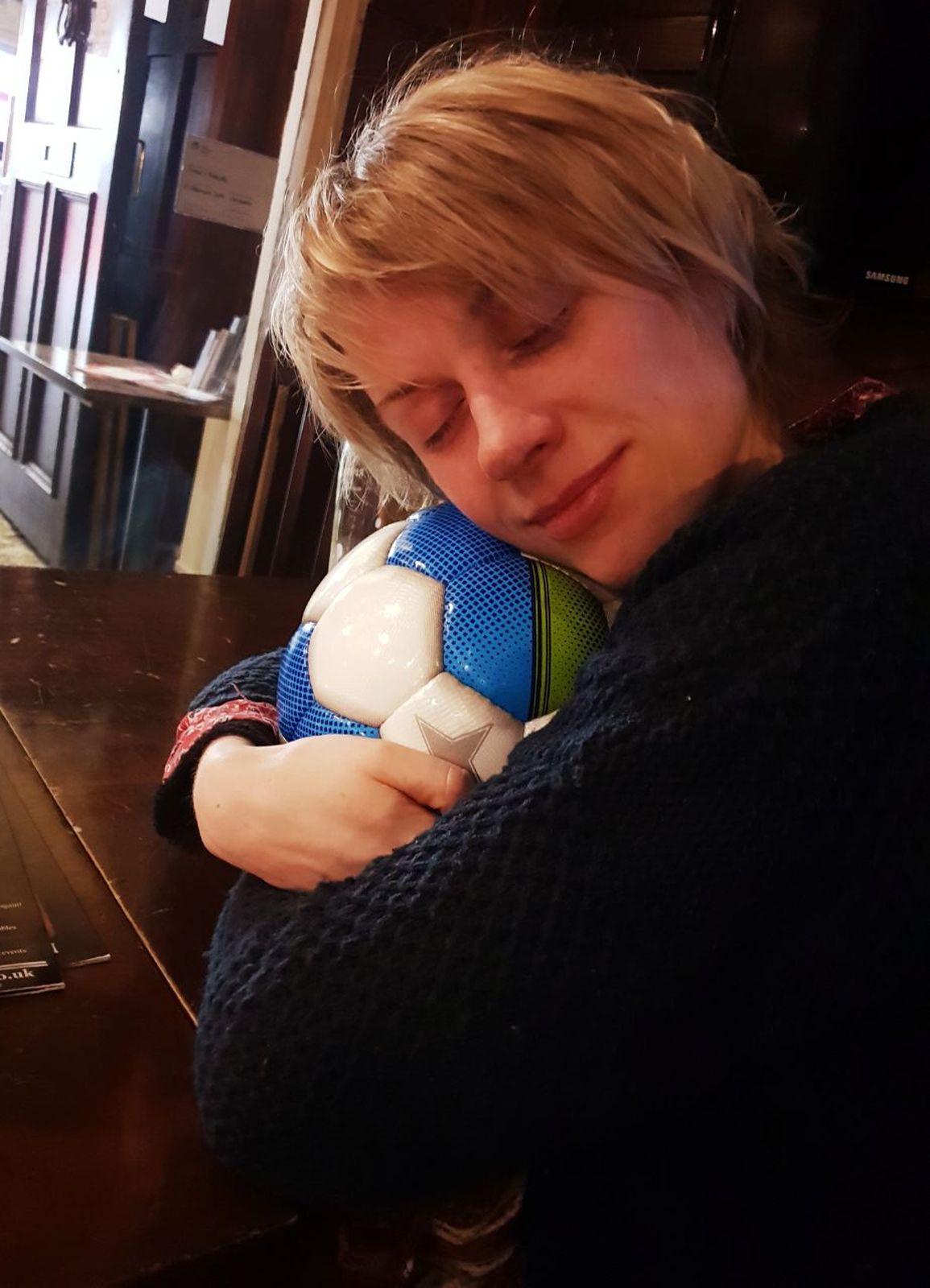 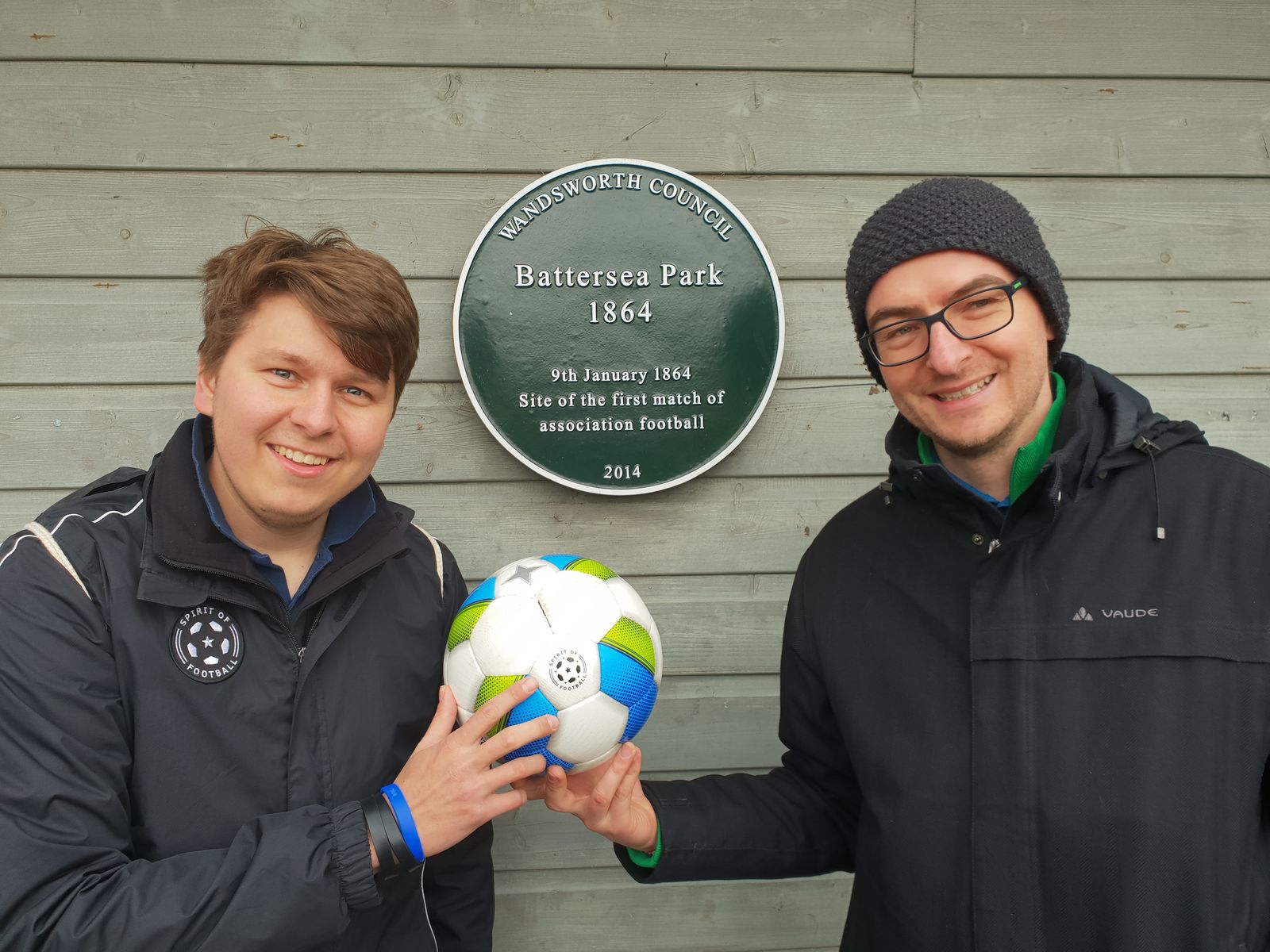 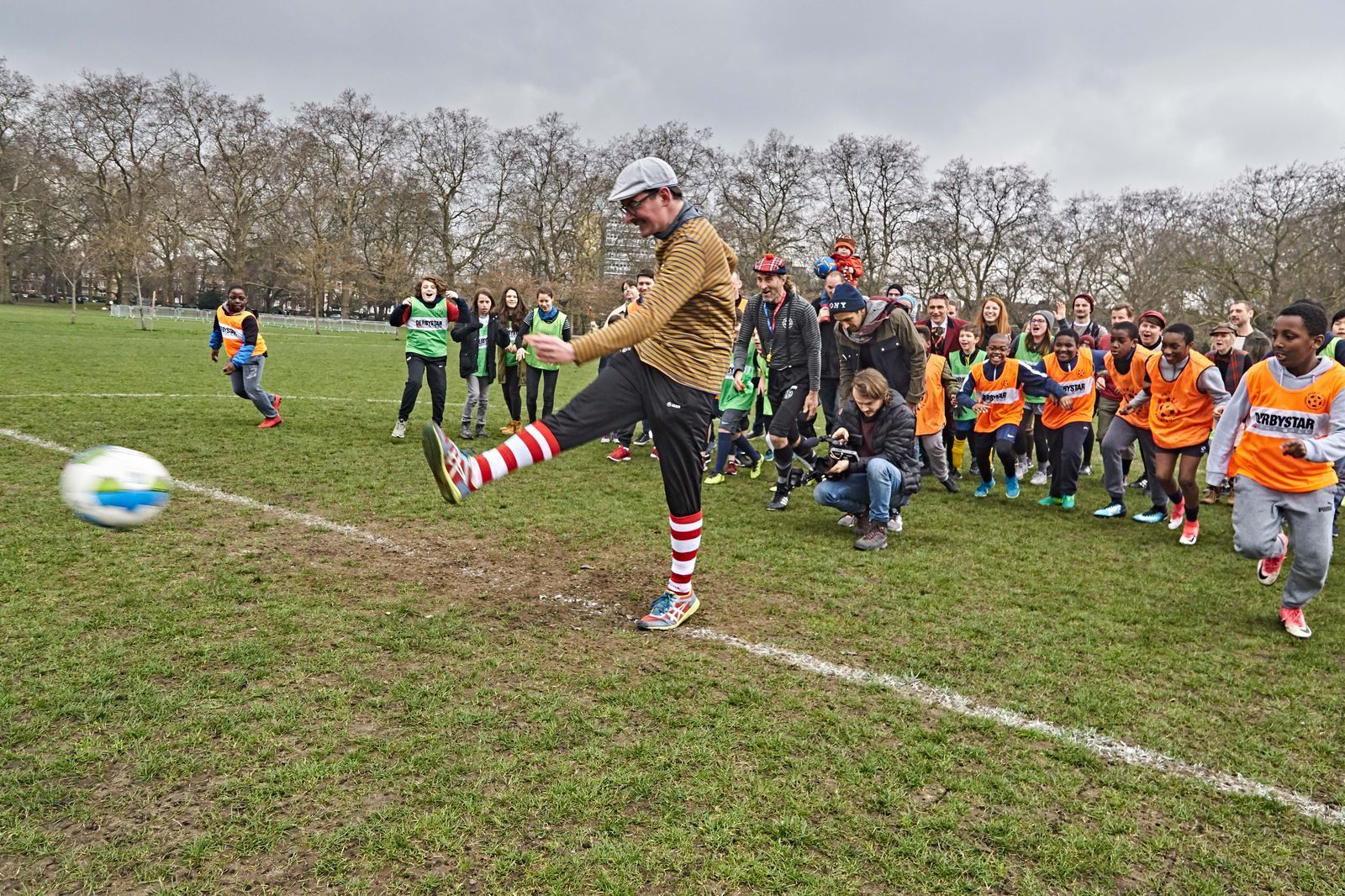 Sunday 25th March was the big moment when everyone who had followed me to England – and those who had come to see me in the birthplace of football, met in Battersea Park. This is where the first game of football was played according to FA rules in January 1864. Everyone came to kick off the journey and set me rolling for the next 100 days all the way across Europe and the Middle East to Russia! “Sven the Terrible” was the first to kick me and that was certainly my greatest moment so far, because now I knew I would meet my destiny.

Nearly everyone present wore striped shirts and funny moustaches and old-fashioned shoes, the music was quick and inspiring, and the teams tried their best to play according to the rules of 1864, but much was up to the players’ imagination and a lot of fun was had by all! Oh, I could have rolled about endlessly on the green lawn of Battersea Park, but the moment always comes when humans get tired and hungry and then all of the best events come to an end. Still, another beautiful thing happened when everyone who was there headed and signed me and all of a sudden I became really psychedelic and colourful! My carriers and their friends then got a nice lunch at the Sacred Heart Primary School and they even toasted me with prosecco – which I thought was very fitting! 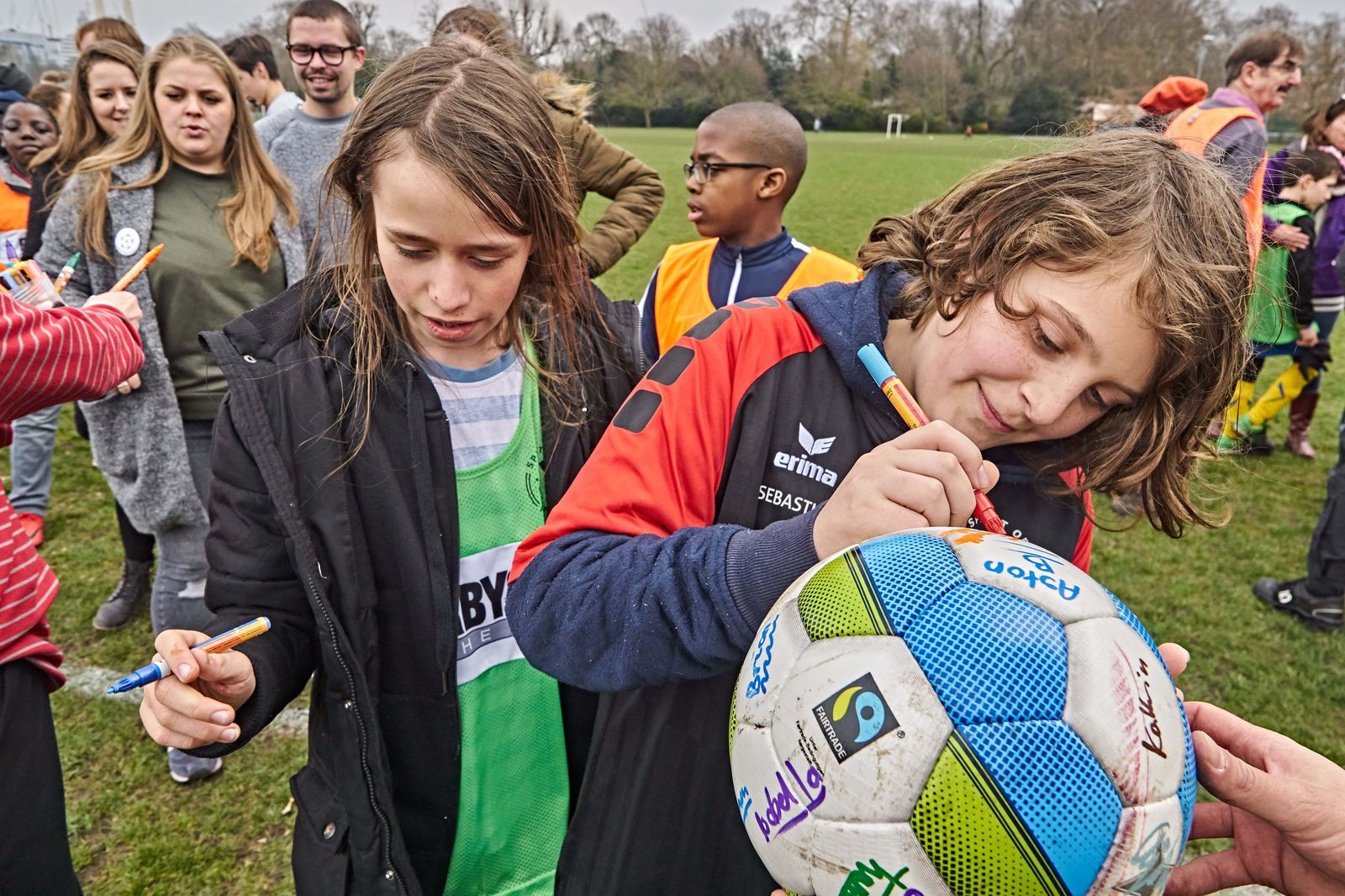 On Monday, after a late night, I had to start work at eight o’clock! There was a workshop at St. Mary’s Primary School in Battersea, where the history of all of my predecessors was explained and that was very interesting indeed for me and everyone else. The children were extremely attentive and participated well in all of the exercises. Maybe they knew so much about geography because they themselves or their parents were from so many different countries? I once more really looked forward to my big trip! In the end the children played football on the roof of the school, surrounded by the tower blocks of Battersea, and added their signatures to me. A wonderful morning for me, because I always enjoy the company of children! 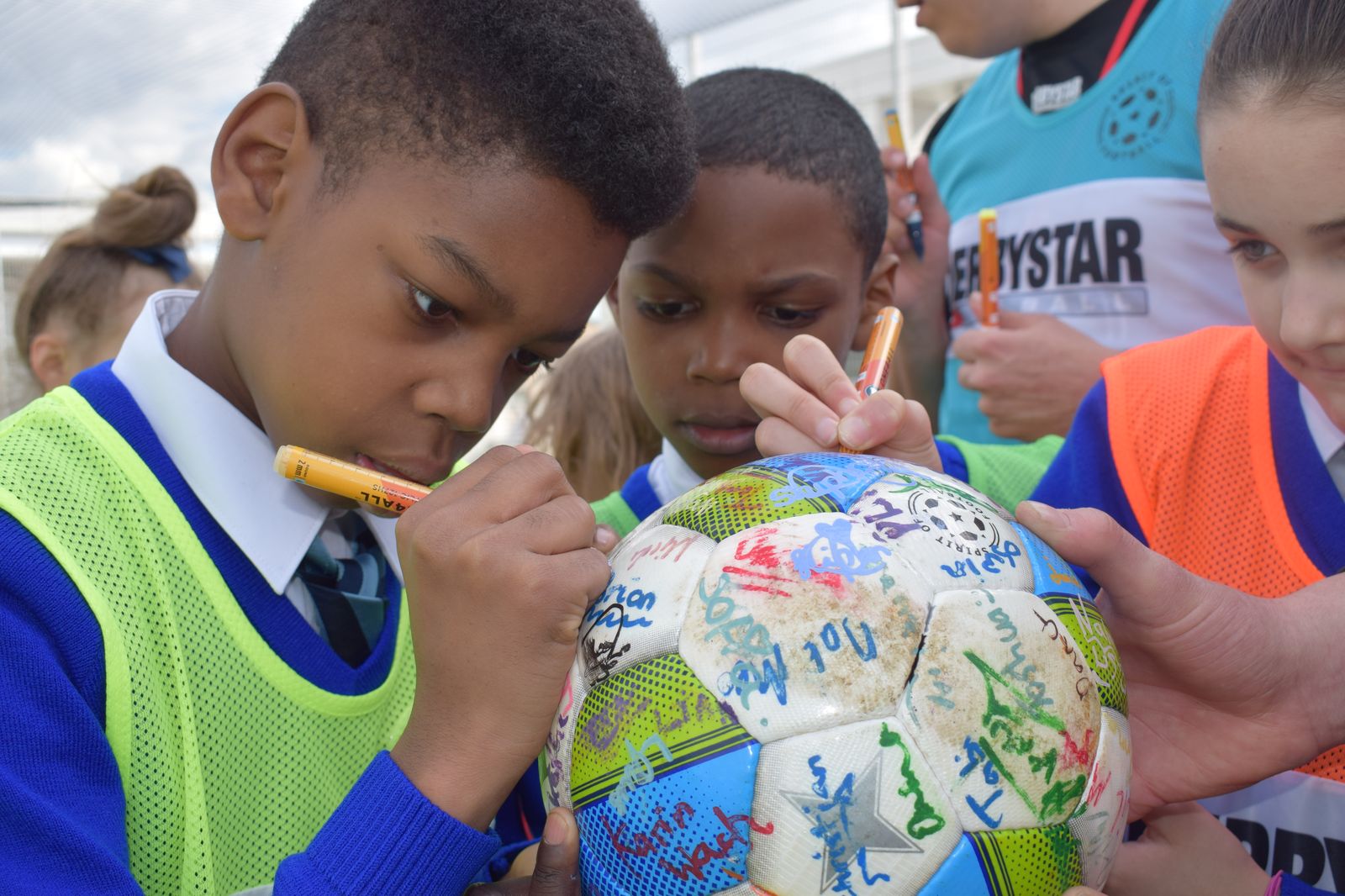 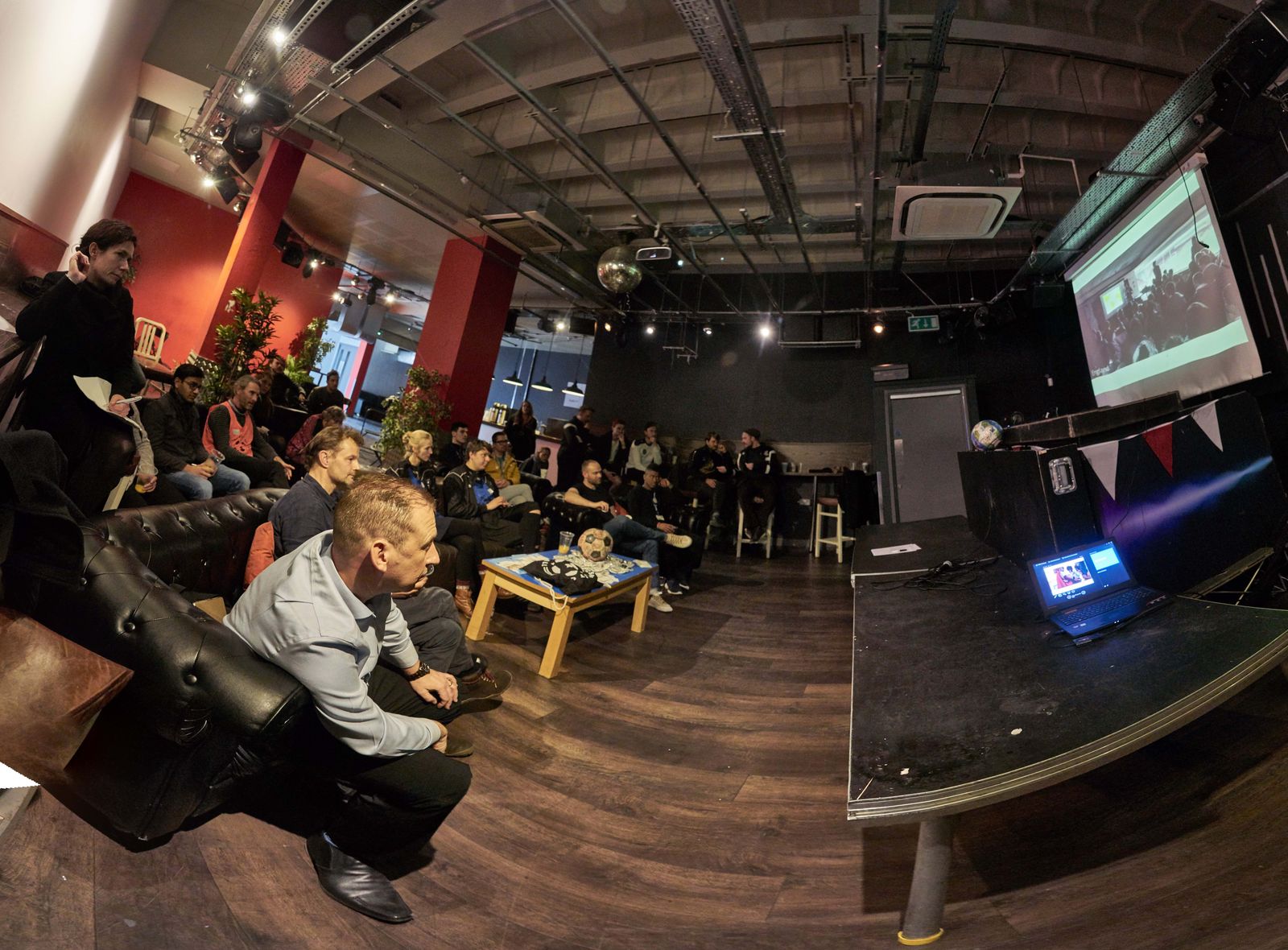 In the afternoon, another workshop took place at Queen Mary’s University, where a small but interested group of students wanted to get to know the work my carriers do with me, since they intended to start similar projects. Of special importance to them was the fact that I am easily accessible to people who are less fortunate and/or have to deal with violence and they wanted to know about possible methods to remedy this and build up a sense of community, fair-play and respect. This was just up my street and I was glad to gather their signatures – as well as those of all the students Benni and I met on our way back to the van who wanted to know everything about my journey too. 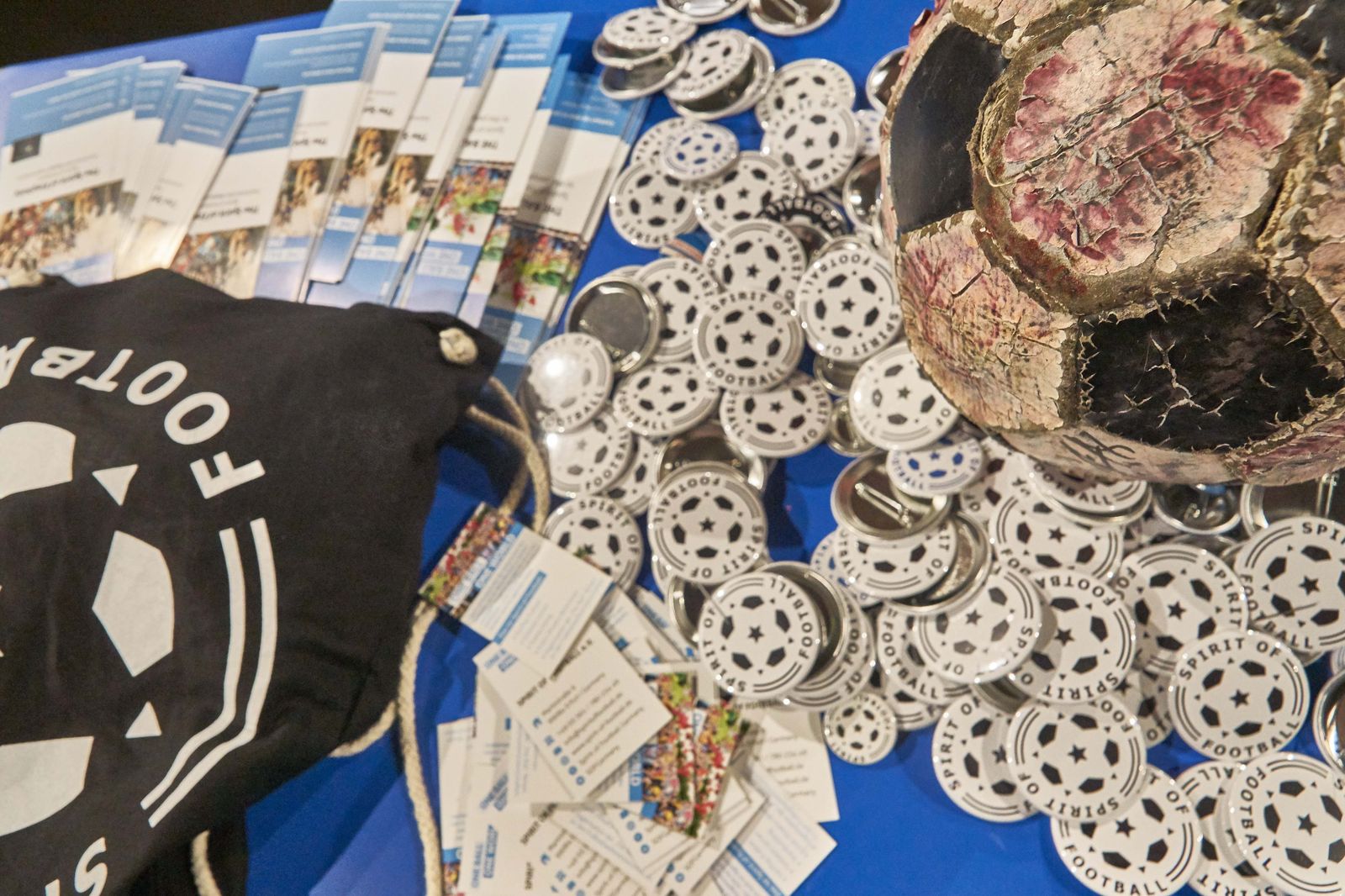 On Tuesday 27th March, most of the group said goodbye to me and took the train back to Erfurt, while five of my carriers (and a film crew of two) drove in the van to Liverpool. This is where football manager Jürgen Klopp lives – he is the designated ambassador of my journey and a famous man both in Germany and England. Though Jürgen had very little time, I had lots of fun with him and Andrew (who carried two of my predecessors around the world and seems to be Jürgen’s doppelgänger) and I fell head over heels in love with Jürgen’s smile and now want to make him very proud. This alone was worth the scant 15 minutes we had together!