The Ball invited to Special Olympics launch in Johannesburg

Our congratulations go to Special Olympics Africa, who launched their African Football Initiative with a friendly Unified™ celebrity football challenge in Nelson Mandela Square, Johannesburg.  South Africa’s First Lady, Mrs Nompumelelo Zuma kicked a prototype of The Ball 2010 to get things started and The Ball’s very own Andrew Aris went along as chaperone and player. 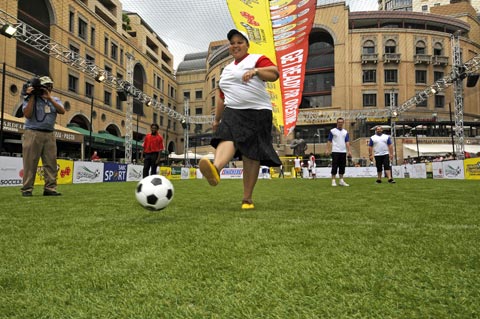 Special Olympics Africa is partnering with Spirit of Football CIC on “The Ball”. The partnership aims to showcase the achievements of intellectually disabled athletes in Africa though joint activities. The launch game was played with a prototype of The Ball, which in 2010 will embark on its most ambitious journey yet, a 10,000 mile pilgrimage through Europe and Africa to the World Cup in South Africa. Andrew Aris from Spirit of Football was in South Africa to participate in the event. Andrew will be travelling with The Ball on its journey to the 2010 World Cup. 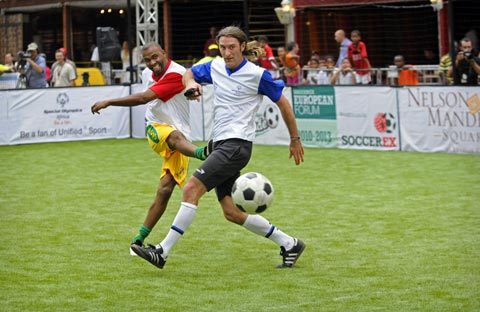 A friendly rivalry sprang up between the 94.7 team and the celebrity soccer team. Darren Simpson had challenged soccer legends Lucas Radebe, Mark Fish and Sean Barlett on radio last week. Banyana Banyana player, Janine van Wyk joined the legends and their Special Olympic Athlete partners. Darren Simpson headed up a team with Special Olympics Athletes and Bongani Nxumalo, Zane Derbyshire, Joey Rasdien and Andrew Aris. Surprisingly Darren’s team was 6-2 up at half time, Darren having scored four of those goals. The legends looked slightly sluggish but managed a comeback in the second half and the game ended in a 10-10 draw. Graeme Joffe provided a highly entertaining commentary throughout the match.

Here’s a short video of the launch in South Africa.

Our previous two trips were with a replica of the official ball, but this time we’re taking a ball especially made for the trip by Alive & Kicking.