The Ball in Mali 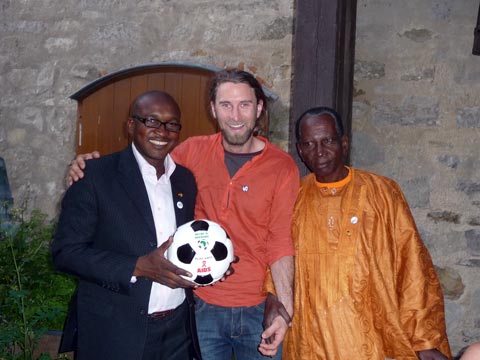 Andrew Aris meets the Mayor of Kati and his assistant

The Ball will visit Kati, a town in Mali’s Koulikoro Region, about 15km from Bamako, Mali’s capital. Kati has a population of approximately 40,000 inhabitants.

Kati’s football-mad Mayor Hamala Houdaia has even invited us to visit him in his office for a game of keepie-uppie, and suggested that the city administration organise a football game with Kati’s semi-professional team that plays in the Malian 2nd division.

Footballs in Kati are prized assets and locals use some interesting techniques to repair them when they get damaged. We are looking forward to investigating this and learning about local culture during our home stay with local Malaian families in March 2010 en route to the 2010 World Cup.