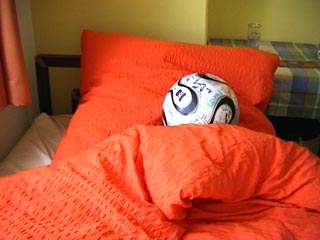 Time to get up

So then, on with our imaginary chronology of The Ball. You may remember that it checked in to a hostel in Erfurt and fell asleep. Well, eventually, it awoke from its slumber and bounced on to check out the fervour of our German hosts as their team played Poland in the group stages.

Wach or Wake? The Ball gets up to watch a Germany game.

The Ball bounces on

As with the England game in Nürnberg, I found my loyalties divided. As I said in that post, my mother’s from Germany, while my father was born in Poland. So which side should I support? Perhaps it was my English upbringing that made me inclined to support the underdog — in this case the Poles — but my desire to party with the crowd after the game strongly favoured the Germans. I decided to remain as neutral as I could. 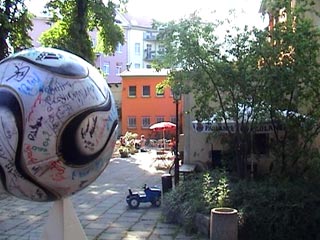 My support was as finely balanced as The Ball

I was also nervous about being in the midst of such a large and emotionally charged crowd — especially since it seemed that a few neo-nazis had slipped in past security and were chanting slogans at the back of the hall. It’s impossible to blame the Stadtgarten for this: the security folks could only check the contents of people’s pockets or bags — not the prejudices in their heads.

It was a very important game for the Germans (for the Poles too of course), and the temperature in Erfurt’s Stadtgarten rose as the game progressed without a goal from either side. Thankfully, the event passed without incident, and the delight of the crowd as Germany found the net in the very last minute was a joy to behold. 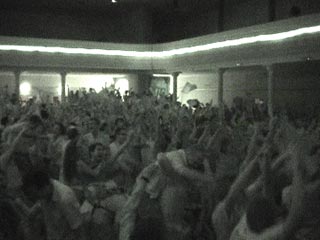 Uproar at the Stadtgarten

With the Poles now out of the competition and the Germans now certain to progress, the crowd began to sing their hearts out, brimming with confidence that their team would go on to reach the final. 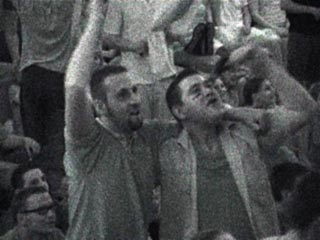 For the sake of the atmosphere in the host nation, I sincerely hope they do make it to the final. Who knows, perhaps they might even meet an invigorated England in that game at the Olympic Stadium? It would be the stuff of legends — and it’s almost too much to contemplate and too much to hope for.