You think you have dodgy pundits? 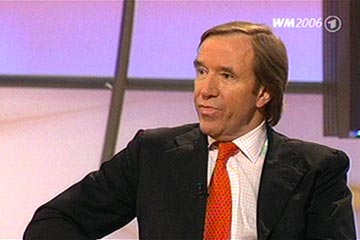 Germany’s other pundit — other than Rudi Völler, that is

I’ve been reading on various blogs, most humorously in this post on twohundredpercent’s blog which I came across because he commented on our post on the Guardian blog (was that the equivalent of a blogging love-in?) that the commentary on the games has been infuriating. In twohundredpercent’s words, “I think that we’ve all, at some point, found ourselves in a state of apopleptic rage at the coverage of the BBC and ITV at this World Cup.”

You have no idea what I’d give to be infuriated by the likes of Ian Wright or Jonathan Pearce. You should try listening to the bloke in the picture above. Oh my. To say that he’s a charisma-free zone would be an injustice to, say, Steve Davis… he makes Alan Hansen sound as entertaining as Bill Hicks.

Hey ho, the national anthems are playing — signing off for now.