Another ball travels to Germany

The Phantom Fouler reports from England that, according to an article in The Sun, the ball which was used in the 1966 World Cup final is travelling to Germany for a few days. Apparently, its presence will “inspire England to victory over Sweden”.

Hmm, I thought that was Sven’s job, but we’ll see.

I spotted it on the preview of the England v Sweden game on German TV. The host (whose name I’ve forgotten) was wearing gloves just to be near it. As you can see from the picture, the monstrously dull Günter Netzer could hardly bear to even look at it. 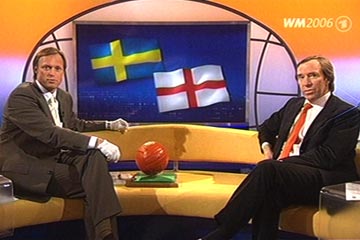 An English talisman in Germany