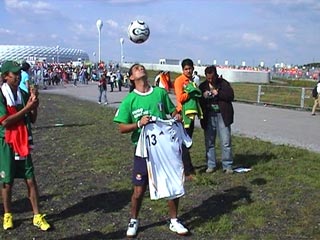 Beto keeps it up

Outside the Opening Ceremony is the usual media circus — more camera crews and presenters than you can shake a football at. In the midst of this electronic feeding frenzy was one Adalberto Sanchez, world record holder for bouncing a football on his head. His record is two hours, if you’re thinking of emulating his feat.

One of the features of South and Central American supporters is that they often buy the shirt of the host country as a show of goodwill. Watch Beto as he puts his Deutschland shirt on whilst bouncing The Ball on his head!

Freestyling goodwill towards the hosts.