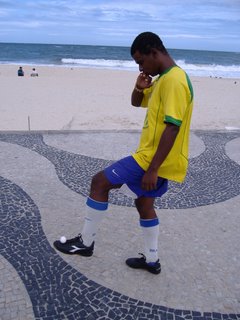 I came across Brazil Uncovered, a fantastic little blog by Doug Banks and Dan Osborne, a couple of days ago, and I’ve been enchanted reading the stories of their adventures ever since. This is how they describe their motivation for the trip:

We’re making a pilgrimage to Brazil to re-ignite our faith in football and rediscover just what made us passionate about the game in the first place. We’ll go to watch the players who can take your breath away with magical skill, meet the fans and try to find out just why it is that Brazilians live and breathe the beautiful game.

And what a trip that must have been — they find football wherever they go, and they report on it with an enthusiasm that belies the cynicism about the game than they express in the statement quoted above. I’d be willing to bet that the many people who are increasingly jaded by the antics of the professional game here in England would benefit from reading Brazil Uncovered too.

The head of the German football federation warned that stationing tanks around the stadiums at this year’s World Cup finals would destroy the friendly atmosphere the organisers want to create.

It seems that FIFA are slowly cottoning on to our idea of an equivalent to the Olympic Torch for football. Two years ago, instead of being carried by athletes to the Olympic Games in Greece from, er, Greece, the torch made a tour of all the countries that had hosted the games. Well, this year, the World Cup trophy is being taken from country to country before it goes to Germany. It’s not just visiting the countries which have hosted the tournament, but the idea seems to be along the same lines…

For the first time in history, the inimitable FIFA World Cup Trophy will travel the globe in a whirlwind tour ahead of next summer’s festival of football. Neither the current trophy, designed and recently renovated by Italian sculptor and creator Silvio Gazzaniga, nor its predecessor the Jules Rimet Cup has ever before embarked on such an amazing journey.

Apparently there’s a 3D film that has been made to accompany the tour:

[The film,] exploring the almost mythical birth of the Trophy itself, will wow the audience with its tremendous effects and distilled football fever. From the heavens and molten beginnings, the Trophy emerges among the stars and is given a fictional ‘birth’ befitting its vaunted status in the real world.

Quotes come from the article The FIFA World Cup comes to the world on the FIFA website. No news on when it will reach London — but wouldn’t it be great if it coincided with the game in Battersea Park when The Ball begins its journey? The trophy will be in London on 23 March 2006, although no venue has been announced. The entire schedule can be found here

There is dough in Football 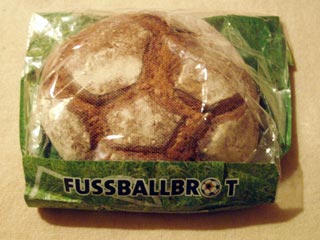 I always knew there was bread in football, but now there seems to be football in bread as well. Spotted this weekend in Hamburg.

Seems like the project that Sven Goran Eriksson and Nancy Dell’Olio founded in 2002 has finally got itself a website. On it, they say:

“No matter where you go in the world, the language of football speaks for itself, transcending class, age, religious and gender barriers. High in the mountains on distant desert plains, on paradise beaches or arctic wastes — if you don’t speak the language you can always talk football.”

Check it out at www.truce.net

According to the Independent, in an article titled Olympic Flame Hijacked by Anti-Capitalist Protesters:

“Eleanora Berlanda, the Italian 1,500 metres champion runner, was pounding the streets of the northern city of Trent bearing the torch when eight protesters, their faces hidden by scarves, burst through barriers along her route and grabbed at it.”

Hmm, I wonder what adventures await us…