Richard sent us a picture from Korea, where he’s currently working. Not the one that hosted the 2002 World Cup, but the one to the north – DPRK, the Democratic People’s Republic of Korea. 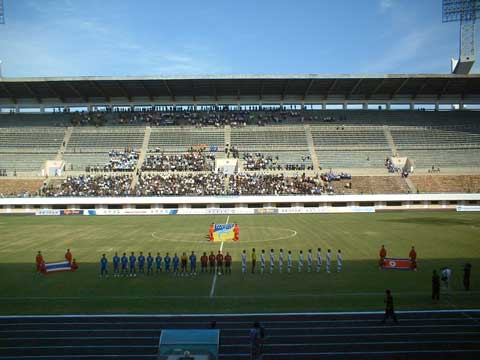 This is the lineup for the DPRK v Thailand World Cup Qualifier at the Yangdakdo Stadium on the 8th September 2004 — sparsely attended by the looks of things. The result… DPRK 4 Thailand 1. “No 10 Mr Hong standing out as North Korea’s answer to Rooney.” reports Rich.

Back in 2002, I heard a rumour that FIFA and DPRK almost reached an agreement for Pyongyang to host one of the 2002 games. I’d have jumped at the chance to see a game there during the tournament, but the plan fell through. Phil and I also tried to arrange a visit enroute to Seoul with The Ball, but neither we nor The Ball made it into the country then either. A couple of weeks ago, however, a copy of the 2002 trip movie (or rather a 55 minute version of it) was hand-delivered to Rich and screened in Pyongyang – a North Korean premiere!

In other news regarding Korea (though this time concerning South Korea), the FA reports in its most recent newsletter [Download the PDF here] that a Royal Navy team recently played a match against a South Korean Navy team to commemorate the first game of football on Korean soil in 1882. Phil and I had heard the story while we were in Korea in 2002, but couldn’t confirm it – so it’s good to get the lowdown from the FA itself:

“British sailors from the HMS Flying Fish played football on the jetty, leaving some balls and a pair of boots by the ship. Korean dockyard workers, watching them play, started to copy what they had seen and football soon spread around the country. Today, it is the nation’s most popular sport.”