Bank Holiday Monday, 31st May 2004
Kick Off 2.30pm on the All Weather Pitches in the south-western corner of Battersea Park
Click here for a map of the park

IMPORTANT
It’s Astroturf, so no studs! 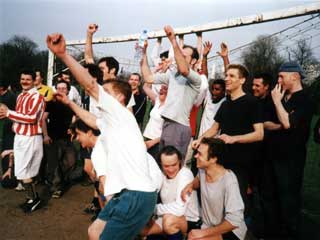 The teams in Battersea Park, March 2002

So then, it’s just gone half-time on the way to the next World Cup, and Football’s Leaving Home is undergoing something of a revamp. To celebrate, we’re first going to play a memorial game in Battersea Park, in the same place where we played the inaugural game in 2002. Afterwards, we’re showing the one hour movie in the function room of The Prince Albert.

Continue reading to find out more…

First off, the film (the trailer is above) that Phil and I made during the last trip is finally ready to be seen – 18 months of spare-time-editing later. I suspect that it still hasn’t reached it’s final form, but we feel confident enough about it to screen it in it’s full one hour glory to you, our select audience, after the game.

We have the function room of the Prince Albert (the same pub we gathered in after the original game – click here for a map) booked from 4.30pm onwards. If you can’t make it to the game, we’d still love to see you at the pub afterwards for the screening.

Second, we’re changing the name of the project to “The Spirit of Football”. Partly because no-one outside of the UK has heard of the song “Football’s Coming Home”, partly because we realised that it’s easier to explain to people what the web address of this site is when no-one has to remember if there’s an apostrophe in it or not and partly because it seems to sum up the myth/symbol that we are trying to create.

Thirdly, we just want to play a game of football. We hope as many people as possible who played in the original game will be able to make it, although we’re also looking forward to seeing many new faces too. Rumour has it that a few of the people we met on our travels will be there for the game and the film premiere… watch this space…

Written by Christian Wach on Tuesday, May 4th, 2004