The Globe in Berlin 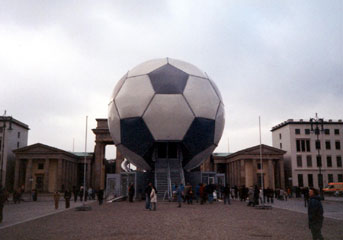 FIFA’s artistic director, Andreas Heller, designed a huge globe which has been on show in Berlin. Dirk went along to take the pictures on this page and to play with the interactive exhibits held inside… 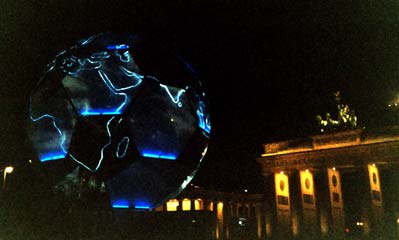 The Globe by night

“it’s a sort of multimedia show wich covers the German history of World Cup, the host cities, stadiums, as well as a little bit fan culture… The best thing has been a virtual penalty game. You could kick an virtual ball towards a projected goal which was protected by an animated goalkeeper (an animal, a chicken, I suppose). Quite amusing watching the chicken doin’ some artistic stuff for a few seconds before he finally catches the ball or misses it.”

UPDATE: Seems like Google Maps caught the Globe on camera when it was in Dortmund. Have a look!