They gathered at the Peace Pagoda, Battersea Park at 2pm to do battle. For some, it invoked memories of Passchendaele, Monte Cassino, Stalingrad, Trafalgar. For others it was merely a game of football. Jumpers for goalposts.

There were some old faces and some new, an interesting variety of footware and “football kit” and some shockingly white legs but the spirit and belief were high. After the necessary delays to greet the assembled worlds’ press (well…CNN) teams were picked and lined up Lights vs Darks. 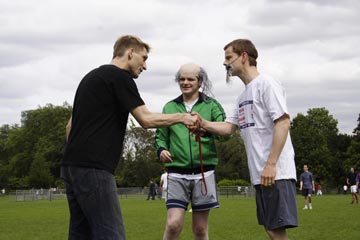 The Lights sprinted off to an early lead thanks to some excellent play by Phil down the wings and Chas, Shilton-esque, in goal by half time they were easily in front at 5-1. 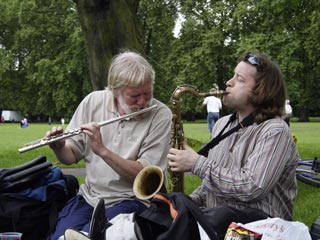 Whatever the Darks were drinking during the break (I believe it was Champagne) they came out a team transformed for the second half.

It was nip and tuck in the midfield with the Darks adding three goals to be answered only by one from the Lights. Phil then switched teams playing for the Darks and the introduction of doggy Maisie to harry the Lights attack saw the Darks draw level in the very last minute with a stunning effort on the half volley by Einar. 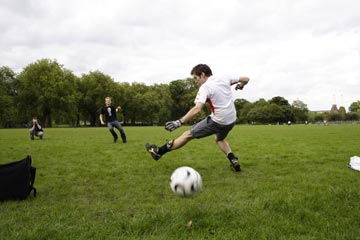 So, to penalties and it was and Chas in goal for the Lights using the old Grobbelaar wobbly to great effect, saving three penalties. This just left Tom to score which he duly did, giving victory to the Lights. The post match analysis in the pub afterwards concluded that everyone had a very enjoyable day and it was a fitting send off for Phil and Christian on their journey to the World Cup. 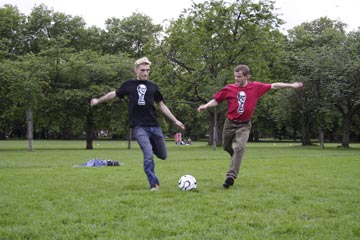 Posted in England | No Comments » 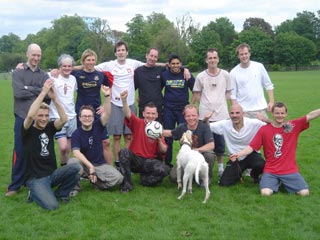 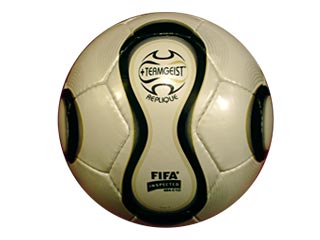 Nope, I’m not talking about spyware, malware, adware or anything destructive to your computer’s health here, just a selection of the funny, annoying, provocative and simply delightful football-related trivia that’s come my way recently… most of it, no doubt, gearing people up for the imminent (oh my gosh how imminent!) start of the World Cup in Germany.

To kick off then, a sweet reminder of (one of) our World Cup hosts from four years ago — the kitschy but utterly compelling Lovely Football from Japan’s Onitsuka Tiger National Choir. Okay, so it’s advertising a shoe, but just check out the sing-along video!

So, following on swiftly from national stereotypes to the stuff showcasing male stereotypes… I guess this proves that men can’t stop thinking about football — it’s a photo of “Amburg Wc Futbol club” from Flickr: And then two timely pieces of advice — firstly, the “World Cup Rules for Women”, a memorandum (in HTML or PDF format) containing rules such as these:

1. From 9 June to 9 July 2006, you should read the sports section of the newspaper so that you are aware of what is going on regarding the World Cup, and that way you will be able to join in the conversations. If you fail to do this, then you will be looked at in a bad way, or you will be totally ignored. DO NOT complain about not receiving any attention.

2. During the World Cup, the television is mine, at all times, without any exceptions. If you even take a glimpse of the remote control, you will lose it (your eye).

3. If you have to pass by in front of the TV during a game, I don’t mind, as long as you do it crawling on the floor and without distracting me. If you decide to stand nude in front of the TV, make sure you put clothes on right after because if you catch a cold, I wont have time to take you to the doctor or look after you during the World Cup month.

Follow the links to the full document to read Rules 4 – 12. If you’re going to print it out and stick it to the fridge, I recommend the PDF — it’s designed to look like an offical FIFA document. Should make all the difference when confronted…

Secondly, if you do have to mingle with the fairer sex during matches, “How to explain the offside rule to a lady” (as it was politely titled when i received it) could help:

The Offside Rule explained for girls

You’re in a shoe shop, second in the queue for the till. Behind the shop assistant on the till is a pair of shoes which you have seen and which you must have.
The female shopper in front of you has seen them also and is eyeing them with desire.
Both of you have forgotten your purses.
It would be totally rude to push in front of the first woman if you had no money to pay for the shoes.
The shop assistant remains at the till waiting.
Your friend is trying on another pair of shoes at the back of the shop and sees your dilemma.
She prepares to throw her purse to you.
If she does so, you can catch the purse, then walk round the other shopper and buy the shoes.
At a pinch she could throw the purse ahead of the other shopper and, *whilst it is in flight* you could nip around the other shopper, catch the purse and buy the shoes.
Always remembering that until the purse has *actually been thrown* it would be plain wrong to be forward of the other shopper.
There you go poppet.

To which some wag added:

However if you were loitering by the till checking out the gift cards you are technically NOT INTEREFERING WITH PURCHASE and can be in that position when the ‘purse is thrown’. The purse must be allowed to fall to the floor before you can pick it up and buy the shoes though.

Posted in General, Video | No Comments »