The evening of May 5 will be one few Kashgar locals ever forget after a dramatic night of football in the heart of the old city. 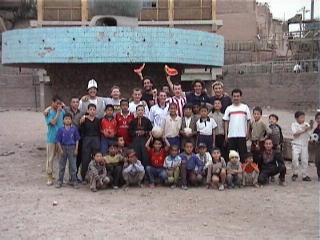 The teams at The Yumulakshahar

The football’s journey to Seoul continued at the Kashgar Coliseum, a gladiator-style pit arena where around 10 international travellers and many local children took part in an epic contest which would have graced the original Rome amphitheatre itself.

We drum up support for a game at the livestock market and then play in a former lake.

The match was played across an area no longer than around 25 metres meaning skills and close control had to be at their sharpest and the long ball game was dead and buried, despite several attempts to prove otherwise. 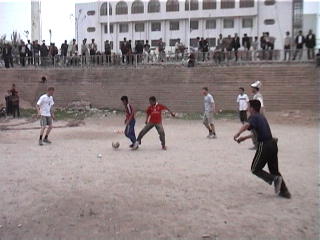 The captains vie for possession

The pitch, which had the traditional concrete slabs for goalposts, was dusty and the corners full of rubble and bricks which occasionally came into play during moments of frustration.

The scoring came thick and fast with at least 18 goals shared between the teams in the first half alone and the team captained by the 10-year-old in the Manchester United shirt went into the interval chomping slices of watermelon, knowing they were two goals in front. 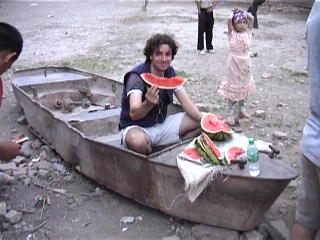 Luke tends to the halftime melon

Despite trailing by three goals at one stage in the second period, the team captained by the 10-year-old in the Bayern Munich shirt ended the match triumphantly when a long-range effort from Kendal Lad Tim proved to be the last of at least three “next-goal win” situations. 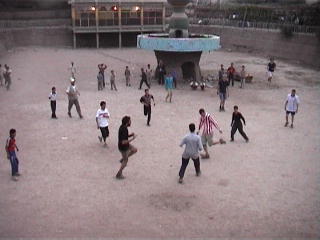 The winning strike at The Yumulakshahar

The strike sparked joyous scenes among the players and hundreds of spectators who lined their way around the arena as this sleepy part of town was rudely awakened by an impromptu festival of football.

The game clearly meant a great deal to all those who took part and watched. It was a glowing advertisement for the international game and will certainly whet the appetite for the forthcoming World Cup. 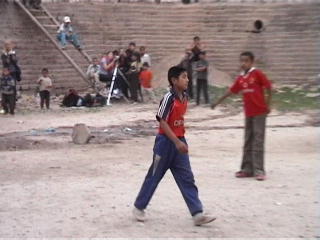 Munich walks away with the victory

But forget about teams captained by kids in Man U and Munich shirts battling for supremacy. On this night, football was the winner.

Written by Christian Wach on Monday, May 6th, 2002