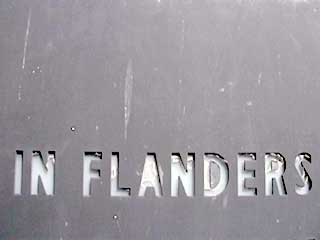 Our first brief pause since leaving English shores was Ypres, in Belgium. We stopped off to try and find the field in which a football game was played between German and British troops during the extraordinary Christmas truce of 1914…

In which we look for the field in Flanders where the legendary game was played. 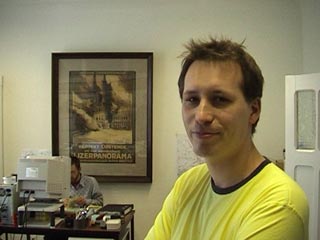 At the archive of the In Flanders Fields museum, we met Dominic Deleau, who gave us a stack of documents about the event and showed us on a map where he thought, from his researches, that the game had taken place. Dominic recommended The Christmas Truce, by Malcolm Brown & Shirley Seaton, which is a comprehensive review of the truce, and which has this to say about the game:

“To many people it has come to be accepted that the central feature of the Christmas truce of 1914 was a game, or possibly games, of football in which British and Germans took part. Indeed, to some the whole event is not so much ‘the truce’ as ‘the football match’. It is, of course, an attractive idea, carrying as it does not only the heart-warming thought of enemies at friendly play, but also the appealing but politically naive implication that nations would be far better employed in settling their differences on the fields of sport rather than on the field of war. Yet there are those, including some veterans of 1914, who doubt if any football match took place at all.” (p.134)

Hmm, that wasn’t in the script. I had no idea that there was doubt about the game having taken place. If that were the case, then Dominic hadn’t been entirely candid with us, and we might be chasing a mirage. We pressed on anyway, following his directions until we arrived at the north-east corner of Ploegsteert woods. I looked at some of the papers that we had been given…

“The Ball appeared from somewhere, I don’t know where but it came from their side. It was just a general kickabout. I shoud think there were a couple of hundred taking part. I had a go at the ball. Everybody seemed to enjoy themselves. There was no sort of ill-will between us”
(Interview, Ernie Williams, Private, 6th Cheshires)

Had Ernie been suppementing his rations with local mushrooms that autumn? Had he hallucinated the game? I found it hard to believe. I turned to a photocopy of a German regimental journal, its cover emblazoned with bold gothic script: “Das Kniglich Schsische Infanterie – Regiment Nr. 133 Im Weltkrieg 1914-18.” I translate for Phil:

“Then a Scot dragged out a football… and and soon there was a proper game of football in progress with helmets for goalposts. It was such a sight on the frozen mud. One of us had a camera, and the two teams of footballers quickly assembled themselves into a single group of pretty colourful rows with the football in the middle. The game ended 3-2 to Fritz.

During the game, our lancers soon discovered that the Scots wore no underwear beneath their kilts, so that their rears were clearly visible as soon as their kilts started fluttering. That amused us greatly, though at first we could hardly believe it, until we were shown otherwise by the opposition. I was later to confirm it in a most practical way as I lay severely wounded on the floor of an English “Sanka” – four lightly wounded Scots sat on a seat above me and I could see that they had nothing on underneath!”

The passage was from a certain Leutnant Johannes Niemann, who had obviously been greatly impressed by the occasion… The Christmas Truce also mentions this, and notes additionally:

“As it happens, this score coincides precisely with that to be found in one of the first references to a football game in contemporary newspapers – in a Christmas Day letter by an anonymous major of the RAMC quoted in the Times on New Year’s Day: ‘the regiment actually had a football match with the Saxons, who beat them 3-2!'”

Brown & Seaton are still skeptical, and continue to list numerous examples of failure to organise games along the front. For example:

“Another member of the Queen’s Westminster Rifles wrote, in a letter printed both in London and New York before the end of the year (in fact the earliest letter on the truce to be published): ‘On Christmas Day we had a football out in front of the trenches and asked the Germans to send a team to play us but either they considered the ground too hard, as it had been freezing all night and was a ploughed field or their officers put the bar up.'” (p.138)

They conclude from this:

“The ground between the lines was hardly fit for a serious game of football; but at least there was a definitie intention to mount a proper match on genuinely level playing-field, while at the same time underlining the general rule that such ambitious ideas tended to be bright hopes that ultimately came to nothing.” (p.139)

What a depressing conclusion to come to. I flipped the book over to look at the cover. The Pan Grand Strategy Series suggested that that the Brown & Seaton were being marketing as serious military historians. I guessed that they were more interested in putting forward a “hard-headed realist” viewpoint than giving space to myth and legend. They were probably right.

I chose one last time from the pile of stuff from the museum archives. I chose a sheet of German printed in clunky courier font. It said “transcribed by Rudolf Zemisch” at the bottom and I translated it thus:

“Soon enough a couple of Englishmen brought a football out of their trench and a game started. This was all so wonderful and unusual. That’s also how it seemed to the English officers. That’s indeed the effect of Christmas, the festival of love, that the hated enemy should for a short time become a friend.”

Well, that sealed it for me. I’d become tired of the quotation ping-pong. There was evidence for and there was evidence against. The story of the game which propages in the popular imagination seems more than likely to be the conflation of various incidents, along with touches of hyperbole here and there. But as I looked around me at the beautiful Belgian countryside, I decided I didn’t care if it had happened or not. No legend draws its power from something as trivial as whether it actually happened or not. It touches us at a deeper level than that. 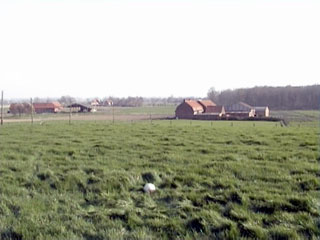 The “football field”, as far as we call tell

For me, this is the field where the game took place. Even if it didn’t. I know this means I have to accept being “politically naive” in Brown and Seaton’s eyes, but would rather a world in which the sentiment of Zehmisch’s last sentence lives and breathes through a fictional tale than one in which it had never been thought.

“Inevitably, though, the slaughter resumed. “The English are extraordinarily grateful for the ceasefire, so they can play football again,” Gustav Riebensahm, of the 2nd Westphalian regiment, wrote in his diary. “But the whole thing has become slowly ridiculous and must be stopped. I will tell the men that from this evening it’s all over”

(from “A cry of: waiter! And the fighting stopped” by Luke Harding, The Guardian)

And so the realist feels at home again, the naive become disillusioned once more, and we move on to Amsterdam.